For creatives, persistence is a fundamental creative virtue that lifts ideas off the concept board and into the world, but beware the persistence that overruns talent, say Douglass/Day.

I bookended a recent weekend by watching two box office televisual events - first thing, the British Lions smashing the Maori All-Blacks. Last knockings, a movie called 'The Founder' - the story of Ray Kroc, the guy who served up the MacDonald's brand to the world.

The main thread for success of both was a form of persistence. One good, one not so good. Kind of ugly in fact. Persistence is an under-estimated value in talented creative people. But there's a right kind of persistence and a wrong kind -as demonstrated by the British Lions at one end and the founder of MacDonald's at the other.

Both stories demonstrate that persistence is a crucial characteristic of successful people. But it's important to grasp the distinction between the good, the bad and the downright ugly.

Rugby first - watching the Lions get their collective mojo back through the various stages of their NZ tour has been a real treat. There have, of course, been delicious moments of individual creativity along the way.

In the second half against the Maori all-blacks, Jonathan Sexton made such a sublime sixty yard kick to touch that the ball rested up against the corner flag before toppling over the touchline. Commentator Stuart Barnes subsequently compared it to a hole in one on a par three. Though such flashes of talent haven't been the most impressive thing about the Lions' play.

More inspiring for me has been watching the team relentlessly going though all those phases both in attack and defence. Against the Maoris it was wave after wave of attritional play in the opposition 22, edging further over the gain line, only to have a Lion spill the ball or knock-on for a penalty that sent the Lions lurching back to their own 22 to go again. Every time as if for the first time.

Okay, so it may be a common sight in rugby. But it happens to be quite common in the creative industries too. Knock-ons and penalties occur every day – the ball is sometimes dropped; defeat is snatched from the jaws of victory and most times it's frustratingly out of our control. Budgets are slashed, opportunities squandered, pitches abandoned due to client-side personnel changes, results reversed, research applied, priorities changed overnight. The job goes through phase after phase only for the plan to be dashed.

It takes a certain robustness to take all the knocks. For some creatives more than others, setbacks are difficult to come back from. It's at these times that maturity (of approach, not years) really counts. When you're recruiting for fresh talent that's something to bear in mind. People's creative books may be a true reflection of their flair and talent. But talent is worth nothing if the output of that talent never sees the light of day. That's why I look for another altogether undervalued quality in creative people that's just as vital as creative talent, complements it and absolutely has to exist alongside it. Stamina.

I have seen too many great ideas from talented people languish in top drawers for lack of stamina. What's really hard isn't having a great idea, it's making that idea happen.

As a creative, that should involve a great deal of time invested in getting the idea out of the door of the agency, through all those naysayers and gatekeepers, around all those agency-side impediments, over all those client-side business obstacles, finding your internal supporters and sponsors and using their energy to augment yours - making the rationale so watertight and the execution so true to it that it's impossible to say 'no' to the idea, then taking the client along with you on the journey to fruition.

That's the creative responsibility - not leaving it to a proxy of a Planner, Business Director or Account Director to do your bidding. And that takes stamina.

As I mentioned, I ended my Saturday watching 'The Founder', the story of Ray Kroc, the entrepreneurial force behind MacDonalds, who started off trying to sell his five spindle milkshake makers to drive-ins in the flyover states by repeating the meaningless mantra of 'increase supply and demand will follow.'

Kroc was entirely the other way to the British Lions. He is a testament to the human price paid when persistence trumps talent. Persistence covers a multitude of sins.

Kroc misappropriated the cherished idea of brothers Mac and Dick MacDonald at their restaurant in San Bernardino California and turned it into a global cookie-cutter commercial leviathan. It took persistence but the type of persistence that meant he couldn't keep a handshake honest, let alone a milkshake. At night in his motel room Kroc listened to the words of fictional self-help guru Clarence Floyd Nelson from a fictional book called 'The Power of Positive Thinking'. It has since become a staple of Donald J. Trump.

'There's nothing more common than unsuccessful men with talent,' Kroc parroted everywhere he went. 'Persistence is what makes the difference.' Persistence made Ray Kroc claim the rights to MacDonald's by buying and leasing the land to the franchisee on which every restaurant was built. And that wasn't his idea either.

As a result of his persistence, Kroc ended up not just taking the brothers' life-work out of their hands but their brand name with it - and dumping his own wife for the wife of a trusted franchisee. Ray Kroc coveted other people's passions and ideas. And his bullying persistence rewarded his covetousness. Ray Kroc may have gained the MacDonald's brand but he didn't gain much respect as a man. Because his brand of persistence didn't value talent, and the brand was built on talent.

As the British Lions are demonstrating, stamina is the quality that makes talent possible. May they always co-exist. 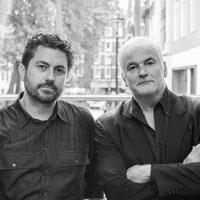 Douglass/Day is an independent agency based in London. A partnership between Dan Douglass and Andrew Day, both cut their creative teeth in London's creative shops, before crossing paths at MRM/McCann.