This post is by Jo Coombes, Senior Research Executive at MEC.

Despite slowing sales, tablet devices will continue to increase penetration and with more models emerging, the iPad's dominance will be challenged.

the UK is the largest tablet audience in Europe with approximately 30 million people using a tablet device regularly in 2014, an increase of 33.2% from 2013 (eMarketer, 2014). YouGov's tablet tracker research found that 44% of tablet owners have two or more of the devices, so it is no surprise that iPad sales were down in 2014 after three years of explosive growth (Time, 2014). Despite some predictions of the global tablet market continuing to slow down in 2015 with just an 8% increase in sales from 2014 (Gartner, 2015), the emergence of an upgrade cycle coming to fruition has been observed in recent months, as people look to replace their current devices with newer models. 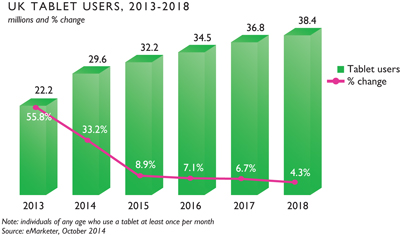 Apple's iPad, which was launched in the UK in April 2010, continues to maintain its position as the leader in the tablet marketplace, eMarketer estimates that in 2014, 15.7 million people and 31.3% of UK internet users chose an iPad. The device also dominates conversations about tablets on social media, with 3.1 million mentions reported across Twitter, blogs, forums and news sites in 2014 (Sysomos). Spikes in conversation are linked to product launches as people feverishly air their opinion – on 16th October, when the launch of the iPad Air 2 and the iPad Mini 3 was revealed, there were 17,626 tweets alone.

Despite the iPad's continued reign, other manufacturers are heating up the competition. There have been numerous android devices racing to the market to challenge Apple's dominance and offer more affordable devices to the masses. Google launched the Nexus 7 in the UK in July 2012. This was quickly followed by the Kindle Fire from Amazon in October 2012. Looking at social media mentions of these tablets shows that they don't generate anywhere near the volume of mentions as the iPad, with the Kindle Fire generating 201,313 mentions and the Google Nexus achieving 86,446 mentions in 2014 (Sysomos). This suggests there has been little hype over the last year, resulting in much lower levels of consumer engagement with these products.

Tesco was the first supermarket to jump on the tablet bandwagon, releasing the Hudl in September 2013. This was followed by Aldi with its Medion Lifetab. In 2014, both announced second-generation products with improved features and functionality. From a social media view, both devices stimulated little online conversation with the Hudl generating 20,272 mentions between December 2013-2014.

2015 is set to see the launch of many new models including the iPad 7, Tesco Hudl 3 and Sony Xperia Z4 Ultra, all of which will need to differentiate themselves to encourage both new users and those considering upgrading their devices to part with their money.

Looking ahead, eMarketer predicts that in 2016, the iPad will take less than half of the UK tablet market for the first time, and will see audience share decline by 7 percentage points between 2014 and 2018. Despite sales slowing down, tablet devices will continue to increase penetration and with more models emerging to challenge the iPad, it remains an exciting and fastmoving marketplace.