I once met someone from an IT company who had been present at several advertising pitches. By and large he was impressed. In countless ways - the pitch theatre, the audio-visual displays, the presentation skills - he had found what the agencies did extraordinarily impressive; much more exotic and polished than anything he had seen before.

"But," he went on, "every agency made the same terrible mistake."

"You all sold what you had to offer as an improvement - a bonus; a nice thing to do which would be good for business."

"What's wrong with that?"

"Well, in the IT business, only in the direst cases would we ever attempt to sell positives. It's a really difficult sell. Every business has plenty of ideas for 'nice things to do' already, and you're just competing with them in offering what they see as a cute optional extra; a 'nice to have' - a flagpole, a fountain in reception. In IT we don't sell positives - we sell the absence of negatives. We don't say 'if you do this it will be nice'. We simply say 'if you don't do this it will be bad - or even catastrophic'. Once you can see the horror in their eyes, the sale is already made."

He is, of course, absolutely right.

Take the phrase 'to add value'. It's the kind of term we would use every day. But should we avoid it? Implicitly it suggests that marketing is a kind of feel-good magic dust, which somehow creates a kind of ethereal value which is not really intrinsic to the product, and which you can easily do without.

Instead, should we frame marketing conversations in terms of lost or wasted value? In terms of the value which is squandered when you fail to market a product well, or when you spend too little on promoting it adequately? Looked at like this, what we produce isn't 'added value' - it's 'retrieved value' or 'realised value'.

If you passed a coffee shop where they threw away one cup of coffee for every three they made you would be scandalised by the waste. But we should be no less scandalised by a coffee shop which fails to put a few chairs on the pavement to advertise its existence (and the fact that it's currently open). A really good business that no-one knows about is about as wasteful as you can get. Yet we regard the waste of tangible value (coffee) to be far more heinous than the waste of intangibles (saliency).

I recently searched the National Audit Office website to see what their general view of marketing was. There is one case which mentions marketing - it is the 'GREAT' campaign to promote the UK - and I am delighted to say that the NAO gave high marks to the effectiveness of the campaign. But under what circumstances, I wonder, would the NAO ever criticise an organisation for not marketing enough? (I'd like them to ask this question of the NHS: for an organisation with an annual budget of £130bn to spend less than 0.0001% of its money on marketing cannot make sense: the placebo effect alone would justify a £50 million adspend, nevermind staff morale.)

A few years ago, National Rail was heavily criticised for running a modest advertising campaign which heralded the opening of the new West Coast Main Line, which had been thoroughly upgraded at a cost of £16 billion. The advertising campaign, which informed people of the benefits of this expenditure, cost perhaps £2-3 million - a rounding error in railway terms. Since I presume that the purpose of upgrading the railway was to get more people to use it, how could anyone possibly complain about informing potential passengers that the work was now complete? According to that logic, it would be acceptable to build HS2, provided you kept its existence a secret.

There is a lot of talk now, eagerly parroted by people in marketing, about 'accountability': the idea that every pound you spend on marketing must be linked to some measurable return. There are some fairly major flaws to this approach already, as I am sure you all know. Nevertheless, let's just reframe the question of accountability for a moment. What is the countervailing mechanism here? We know how to frighten people who overspend on marketing, but how do we create shame among the people who spend too little? The IT industry knows how to paint that fearful picture. We don't. 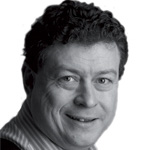 Rory Sutherland is vice-chairman of OgilvyOne London and Ogilvy Group UK. He was formerly president of the IPA and currently writes a column for The Spectator.