Through a deep dive into two 2020 DMA Awards winners, WARC’s Chiara Manco looks at how challenging times can be the breeding ground for creative and effective work.

The 2021 DMA Awards are now open for entries. The early bird deadline is 30 July. To find out more and submit your work, visit the DMA’s website.

Throughout May, the Data & Marketing Association (DMA) has run two webinars celebrating and exploring its 2020 Awards winners, with the contribution of both agency- and client-side entrants. The ‘Class of 2020’ sessions offered unique insight into the winners’ challenges, strategies and results, but most importantly, on what makes DMA Awards-winning work.

Two winners in particular, PayPal and Scania, with very different challenges and objectives, showed how smart strategies rooted in consumer data and understanding, helped them achieve their goals during the pandemic.

PayPal’s ‘A Little Win for Data-Driven Empathy’ won Gold as the Best B2C Campaign. During the webinar, PayPal’s Jill Cress and RAPP’s Shiona McDougall dove deep into the work. “We would have never thought that a global pandemic would be the foundation for some of our best work,” began Cress, setting the stage for a story that was able to turn a challenging environment into an opportunity for powerful and empathetic work.

When the pandemic disrupted people’s lives the world over, PayPal knew it had an opportunity to bring buyers and sellers together to easily enable transactions. “We didn’t want to do anything that was opportunistic,” explained Cress, “we wanted to approach this with a sense of humanity and empathy, infusing some lighthearted humour into challenges we were all facing.”

With no precedent to help inform its strategy, the team at RAPP turned to data. Firstly, it looked at real-time purchasing and decision-making data. It was clear that people’s priorities had changed: toilet paper, cleaning supplies and baking ingredients were at the top of the list – things that historically you wouldn’t purchase with PayPal. This provided insight into the categories and use cases that PayPal had to lean into to reach its audience in a way that would be relevant to them.

The second source of insight was cultural data. An AI-powered tool allowed the real-time monitoring of narratives across the world. In particular, looking at countries that were further into the crisis, like Italy and China, gave PayPal a glimpse into what to expect in Europe and the USA. As McDougall explained, “We could predict when the work had to evolve – for example, when it needed to stop focusing on buying stuff online and move into buying stuff from each other. We could be ahead of the curve.”

Finally, RAPP analysed the language consumers used when making transactions and found evidence that people were still being their “funny, crazy, weirdo selves,” despite the hardships. More than ever, in PayPal’s ‘free text’ boxes, people were thanking retailers for the relief and happiness they were bringing. This helped inform the campaign’s tonality: light, positive, and encouraging to laugh at the small things.

The resulting campaign revolved around the idea of ‘Little Wins’, celebrating those little moments of joy that made a difference in people’s lives during lockdowns. RAPP created more than 200 multichannel assets, which could be optimised in real time, as well as longer-form video content. McDougall explained, “We could have used stock footage or accepted user-generated content, but we wanted to avoid those COVID-advertising tropes that were emerging from big global brands. So, we shot the videos in European locations under lockdown and, for the production, we sought out smaller businesses, to support the gig economy so important to PayPal and its customers.”

About two million incremental PayPal transactions could be attributed to the campaign, with first-party tracking identifying an ROI of at least 55:01. Through ‘Little Wins’, PayPal was able to branch out into categories where it had not previously been considered and encourage new behaviours that could potentially last beyond lockdowns.

McDougall concluded, “Customers have learned about new ways to use PayPal, but we learned so much as well. Listening to the stories data was telling us in real time served us well in this campaign, we planned for constant change from the beginning.”

Scania’s ‘The Unbelievable Truth’ won Gold in Automotive, championing the kind of creativity that is rarely seen in truck manufacturing, a category that generally relies on functional communications.

Aside from those operators involved in the transportation of essential goods, the transport industry came to a grinding halt once the pandemic hit. With factories closing, supply was limited, and stock levels were also growing from end-of-contract returns.

Scania’s truck business was struggling, but, as a premium-price brand, it did not appear to be in the best position to reboot the industry. April Six’s David Dent, who worked on the campaign’s strategy, explained, “The economics of running a truck make it cheaper in the long term, but by human nature we turn to a low-cost upfront option when times are difficult.” The challenge for Scania was to increase sales without compromising on its brand positioning.

Research uncovered that Scania was perceived as a slightly arrogant brand and so the campaign’s strategy became to challenge this perception. Moving away from the category’s rational and functional approach, April Six committed to an unexpected execution. Dent explained, “We wanted to infuse a sense of humour and warmth to the brand, all while being transparent on pricing and combining it with an unbelievable offer people would not expect to see from Scania. The creative needed to stop people in their tracks, so we decided to not feature any trucks. Lastly, we wanted to wrap this offer up as an event, creating a sense of occasion and driving FOMO [fear of missing out].”

From these three strategic pillars, ‘The Unbelievable Truth’ was born and communicated across all of Scania’s European markets. The creative juxtaposed Scania’s ‘unbelievable’ prices against popular myths, followed by the tagline ‘Only one is true. You won’t believe which.’ 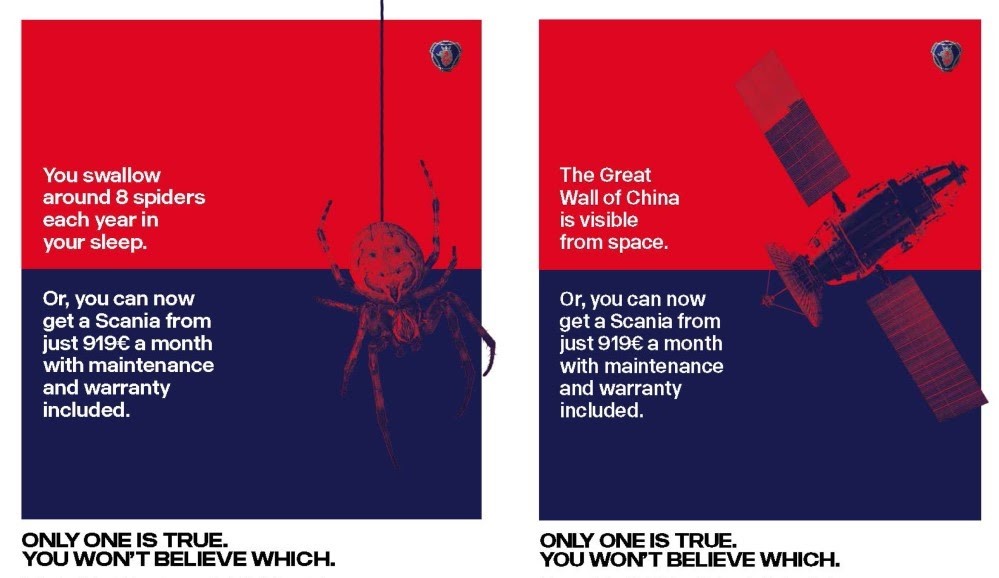 For the roll-out, April Six implemented its ‘Catch-Connect-Close’ effectiveness framework. Animated films across digital and social grabbed attention at the Catch stage, retargeting ensured potential buyers would remain engaged at the Connect stage, and calls to action drove a sense of urgency to drive purchase decisions at the Close stage.

In total, the campaign was pulled together in two and a half weeks from the day of the client brief. “We had four days to create a presentation and another two weeks to get 87 assets live in multiple languages across all European markets,” said Dent. “It was a herculean effort and an amazing bonding experience for the whole team.”

After the campaign, Scania achieved a new monthly sales record, a result that Dent confidently attributes to the work, as all other brand activities had been suspended during that time. “Today,” he said, “stock levels at Scania are pretty much zero: the campaign has been an amazing springboard for used sales.”

Strategy, creativity, and results – DMA Awards-winning work exhibits each of these qualities. Submit yours before the early bird deadline on 30 July. Visit the DMA website to find out more!