Facebook’s Amer Iqbal argues that young strategists contemplating which direction their careers should take – to be a generalist or specialist – should also consider asking an additional question: Are you a purist or a pragmatist? 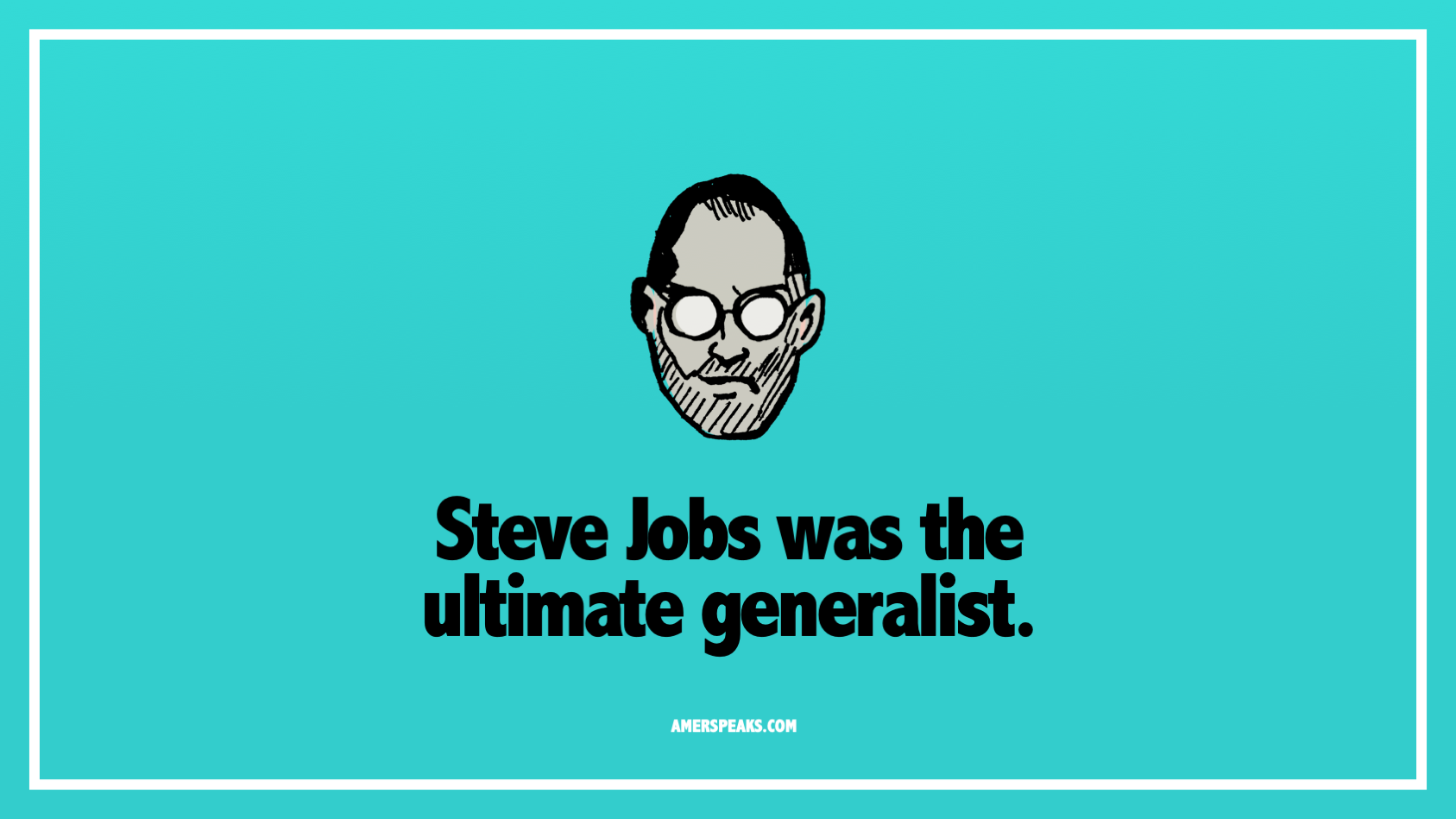 Steve Jobs was the ultimate generalist. He wasn’t a tech-guru like Woz. He wasn’t a designer like Jony Ive. He couldn’t have built the Apple empire without Tim Cook. He may not have been the best player of any one instrument, rather he was the best orchestra conductor the tech world had ever seen.

So, does the legend of Steve Jobs decree that those best positioned for greatness are generally generalists?

Here’s the thing: it’s easy to find equally compelling stories to argue for the value of both generalists as well as specialists in any given field. Roger Federer played a dozen sports growing up and was reportedly good at all of them before becoming a tennis legend. On the other hand, Tiger Woods began his journey towards golf royalty at the tender age of 6 months when his father gave him his first putter – a true ambassador for specialists everywhere. Both are legends in their own sport but come from opposite ends of the generalist-specialist spectrum.

The debate becomes even more confused when we consider the rise of the “Expert Generalist”, personified by polymaths like Elon Musk – a deep expert in several fields, combined with the strategic breadth to think like a visionary leader.

What does this tell us? Simply considering a two-sided argument of generalist vs specialist is an incomplete picture. To articulate a meaningful point of view, we need to add another dimension to tease out the subtle yet important differences. What might the story sound like if we consider two additional characteristics: purist vs pragmatist?

The purist vs the pragmatist

Let’s retell the story with this new angle: Steve Jobs was the ultimate purist. His ability to create clarity and focus of vision was unmatched in the business world. Deadlines, profitability, relationships – these things all came a distant second to his pursuit of perfection. In his youth, Jobs’ stepfather would help him build small electronic devices, obsessing over the neatness of every minute detail that no one would ever see. The lesson was clear: even if no one else saw his imperfections, he would know himself – so make sure it’s perfect.

Isn’t it interesting then that Apple’s meteoric rise under the leadership of a purist like Jobs was built on a series of very pragmatic business decisions? In 2007 Apple decided to launch the iPhone, despite having prototyped the iPad years earlier. The sense was that the smartphone market was more attractive. With an existing base of a billion customers worldwide, it would be easier to win the smartphone game with the iPhone first, a few years later: “See? It’s like an iPhone but bigger!”

Another classic example of Apple’s pragmatism came from the product design teams who were forced to present three potential prototypes to Jobs on a weekly basis. They quickly gathered that things would move faster if they deliberately built subtle flaws into two of the three designs to guide Jobs to decisions quicker. The process would lead to identical design choices, but the accelerated review process meant the company was able to meet release deadlines, a key ingredient in bolstering shareholder confidence.

This balance between purism and pragmatism is a common trait we see in many winning teams and organisations. The concept is reminiscent of an elastic band: if pressure is applied in just one direction, the result is limp and lifeless. However, when two contradictory forces can simultaneously pull, the elastic band stretches with tension. The more one side pulls, the harder the other side is able to counteract. The need for individuals to compromise becomes nullified as increasing pull from each side balances the other into equilibrium. Once enough creative tension and potential energy has built up, the resulting release is resounding: SNAP! This is when innovation happens.

The four archetypes of the strategist 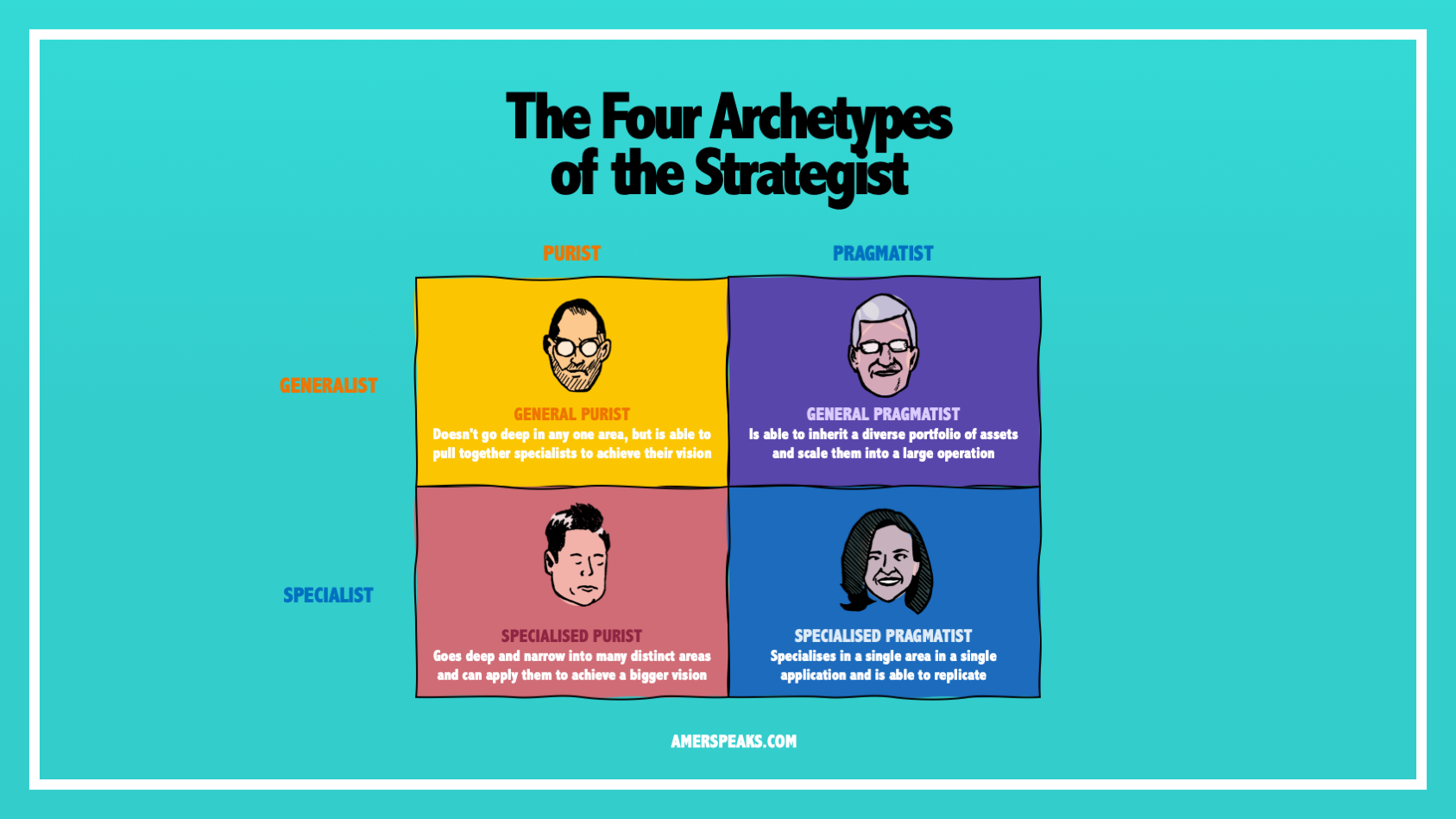 Armed with the elastic band analogy, the counteraction between purism and pragmatism offers us an additional lens through which to assess the different types of strategic generalists and specialists. Four key archetypes emerge:

May not be the greatest violinist but is able to conduct the entire orchestra masterfully. Is able to zoom out and formulate a bird’s eye vision of the way things should be, then pull together the necessary specialists to help execute. Steve Jobs may not have had the technical or design skills of his colleagues, but the clarity and purity of his vision set the bar that allowed them to change the world.

Has the ability to develop a purist vision of perfection, but also possesses a number of deep technical skills they can draw on in order to execute and solution independently. Elon Musk has not only reimagined the future of transport, space aviation and solar energy, but also has deep expertise in software engineering, physics and futurism that help him turn dreams into reality.

May not themselves develop game changing ideas but are able to pull together a disparate portfolio of ideas and products from others into a cohesive operation. Tim Cook didn’t invent the watch, the phone, the tablet or the streaming service – but he was able to use his operational expertise to arrange the building blocks into a trillion-dollar empire.

Often referred to as the “Master of One”. Has a deep and narrow expertise that can be applied to solve for a very specific business problem, and therefore growth comes from scale and repeatability. Sheryl Sandberg made her mark at Google by building out an ad revenue model and scaling it, then moved to Facebook and did it again at a global level.

From archetype to action

In a world where “one-size-fits-all” career paths and learning journeys are being displaced by everything from Masterclass to YouTube, is it feasible for an individual to turn the four archetypes framework into a meaningful career development tool? If so, what might the steps look like?

As the saying goes, to know one’s self is the first step towards wisdom. Of course, the field of strategy took it a step further: any self-respecting strategist would always ask “Where am I now?” and “Where do I want to go?” before tackling the question of “How will I get there?”

Self-Segmentation
To anyone debating where they should focus their career trajectory, identifying oneself into one of the four quadrants is probably a good place to start. Are you currently more specialist or generalist? More purist or pragmatist?

Defining your target
Once you know which box you currently reside in, it’s logical to think of which box you’d eventually like to be in. The vast majority of roles in any workforce on the planet tend to be more operational in nature and this bias towards pragmatism isn’t slowing down – do you want to be in this in-demand majority? Alternately, if you picture yourself playing the purist role in your organisation, do you relate more to the idea of playing the visionary Steve Jobs or the entrepreneurial Elon Musk?

Creating the shifts
Finally, a simple gap analysis can be a useful tool for most; if you want to shift from generalist to specialist, what are the deep and narrow skills you will need to develop? If you’re a specialist who wants to be more of a generalist, how might you learn the soft skills required to act with executive oversight? Equally important is to consider growth within the same box – how can you double down on the unique strengths you already possess and stand out from the crowd?

To whom does the future belong?

Like many topics worth debating, the question of strategic generalists vs specialists is incomplete when viewed as a black and white choice. The many shades of grey only become apparent when we introduce a complementary but distinct dimension such as the spectrum of purist vs pragmatist. The resulting four archetypes give anyone working in the field of strategy a useful lens upon which to plot their personal growth path.

Are we any closer to answering the question of which type of strategist will inherit the future? While in truth the answer may be a decidedly bland variation of “it depends”, perhaps we can leave the budding strategist with a more poetic parting thought:

Generalist or Specialist? Ask not which is right or wrong

A better question to ask is “to whom does the future belong?”

If you answer this for yourself, from a purely pragmatic point of view

Then here’s the good news, my friend: the future belongs to you.

This article is part of a debate series that address the question: “Is the future of strategy in the hands of a generalist or specialist?” The content was born out of an event hosted by the Singapore Strategy Group – an informal industry community with the goal of enhancing the value and profile of strategy. 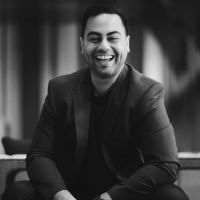 Amer Iqbal is the APAC Head of Digital Transformation at Facebook, based in Singapore. He helps organisations reimagine their future in a rapidly changing digital economy. All views expressed are his own. Get in touch at amerspeaks.com
Get a demo
Topics
Send feedback