UK advertising expenditure for desktop internet is estimated to have grown 2.6% year-on-year to £5.7bn in 2015, well behind the headline internet growth rate of 13.5%, according to the latest results from the AA/Warc UK Expenditure Report, released this week.

Further, on current trends, spend on desktop ads is forecast to begin demonstrating annual declines from the second half of this year, culminating in year-on-year growth of -0.1% for 2016 as a whole. Instead it will be the other two contributors to the gross total, mobile and tablet, which drive internet growth in the coming quarters.

Warc bases these forecasts on data from the Internet Advertising Bureau (IAB) and PricewaterhouseCoopers, who publish their findings biannually as part of the Expenditure Report. We make provisional estimates for internet spend in lieu of new IAB data using our bespoke modelling methodology, making mild revisions where appropriate when the IAB data come in.

Also, from 2014, a new standard definition was launched, based upon consultation with a range of publishers including Facebook, Twitter and YouTube, which has improved measurement of digital native advertising spend (thought to be over £500m in 2014).

At an estimated £5.7bn in 2015, desktop internet is the largest single ad channel in the UK, just ahead of TV. It then follows that desktop is by far the biggest contributor to total internet adspend; our preliminary estimates for 2015 suggest approximately 69% of all online ad expenditure was for desktop last year, with around 29% earmarked for mobile and 2% for tablet.

However, desktop’s contribution to headline growth is reducing as spend plateaus. We believe desktop internet supplied only 15% – or £146m – of the new money entering the online ad market last year. This was down from almost 32% in 2014, and compared to approximately 76% for mobile-specific ads and 10% for tablet.

Further, our current forecast shows desktop internet adspend declining on an annual basis from the third quarter of this year. Mobile, and to a lesser extent tablet adspend, will then be the only drivers of total internet growth over the subsequent quarters, both gaining share as a result. 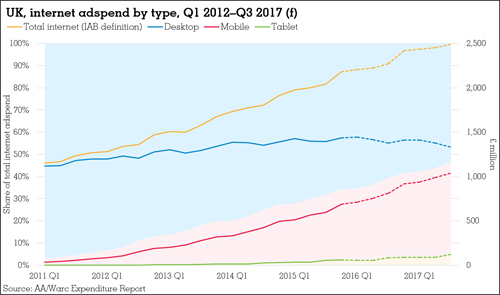 Tablet’s share of the overall ad market is small; it is expected to be around 3% by end-2016, although this will have doubled since 2014. Over half (54%) of UK households now own a tablet, according to Ofcom’s latest Communications Market Report.

When looking at only display ads, almost half (48%) of all online spend in 2016 is expected to go specifically to mobile, compared to less than a third in 2014.

Mobile’s gain is desktop’s loss. While our forecasts will be recalibrated in light of new IAB data in April, we are firmly of the belief that desktop adspend has now reached saturation point in the UK.