Richard Shotton’s new book The Choice Factory is about the decisions we make every day, and the biases that complicate them. Richard sat down with WARC’s Sam Peña-Taylor to talk about the origin of his own interest in the discipline, establishing a culture of testing, and the importance of context.

Behavioural science has entered advertising in a host of interesting ways. Much of that intellectual shift can be attributed to a roster of writers championing the integration of behavioural thought into communications. Richard Shotton is one of them.

What first piqued your interest in behavioural science?

I can remember the specific moment I became interested in behavioural science quite clearly. While working as a media planner on the NHS Give Blood account in 2004 I stumbled across about the story of Kitty Genovese.

Late one night in 1964 or 1965 she was attacked outside her apartment by a psychopath, called Winston Moseley. Her murder was a tragedy – but what scandalised the newspapers was the supposed presence of 38 witnesses who did nothing to help.

Now, the New York Times, claimed the murder was symptomatic of a deeper societal malaise. How could this tragedy happen despite there being 38 witnesses?

However, two psychologists, Latane and Darley, wondered if this was the wrong interpretation. Perhaps no one intervened because there were 38 witnesses.

They spent the next few years running experiments, which proved that the more people you ask for help, the less likely any individual is to come to your aid. They called this diffusion of responsibility the bystander effect.

Reading about those experiments, I thought, "Well, bloody hell, this is exactly the problem we're facing on the blood account. We're asking everyone to donate and not enough people are doing so." So, we persuaded the creative agency to tweak the ad copy from “Britain is low on blood,” to “Stocks low in Brentwood,” or “stocks are low in Cardiff”, dependent on where you were.

Two weeks later, we got the campaign results back. Lo and behold, the response rate had jumped by 10%. That was an absolute revelation to me. I’d spent four years working in the industry and no-one had ever mentioned this huge body of psychological evidence, complied by some of the greatest scientists in the world, that could help us solve client problems.

Of course, the bystander is just one of the hundreds of biases discovered by psychologists. The variety means you can find an appropriate insight for the particular problem you’re facing. That breadth is a real strength of behavioural science.

Advertising is a phenomenally varied thing: sticking up a poster for a lost cat on a lamp post to a multinational trying to influence a government, so you've got this huge range of different circumstances. How can there  realistically be one single theory that works in all those circumstances?

It’s crucial we apply psychological findings. In the same way you wouldn't trust a doctor who didn't have a working knowledge of physiology, why are we trusting people who know nothing about behavioural science to shape communications?

In one chapter, you suggest context can be far more important than message, why is this?

I think that's a really interesting area because our personal experience is a bit misleading. So you sit next to Bob at work, and you think Bob is an introvert and reserved, but that's because you see Bob in one circumstance. You see him at work in an intellectual business environment. If you saw him at his rugby club, or as a father, or as a son, or as a boyfriend, he might be completely different in those circumstances. But because we tend to see people in certain situations, we believe their personality has a consistency that doesn’t actually exist. The overestimation of the consistency of behaviour is known as the fundamental attribution error - it's one of the founding principles of psychology.

The importance of context was shown by Darley and Batson in a wonderful study inspired by the story of the Good Samaritan. They recruited student theologians, and subjected them to a battery of personality tests. Then after briefing them on a topic they sent them off to a nearby hall to do a talk. Some of the students were told just as they left that they needed to hurry as they were late, while the remainder were told there was plenty of time before the talk began.

On the student’s way to the talk, there was an actor slumped against a wall pretending to have breathing difficulties. This was the crux of the experiment. How many people would stop and help?

Only 10% of those in a rush stopped whereas 63% of those who had plenty of time stopped. Something as fundamental as altruism was affected by how rushed people were. When they split the results by personality type they found it had no predictive effect. Context trumped character.

The book contains impressive amounts of primary research – is this an important part of integrating behavioural science? Is it not ludicrously expensive?

I think we talk too much about the expense of research. The genuine risk is running a campaign that has no effect or is counterproductive. 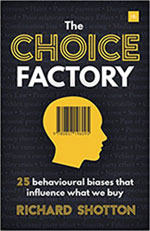 Most of the experiments in the book were cheap. We did a test recently, on charm pricing. Charm pricing is the idea that if a price ends in a nine, either 39 quid, or 79 pence, people perceive it as better value. Some retailers avoid it though because they’re worried it conveys poor quality cues.

My colleague, Alex Boyd, and I tested the impact of charm pricing on quality perceptions. We gave chocolate samples to passers-by and told them it was a new brand coming to the UK. Sometimes we said it was going to cost 79p for a small bar, sometimes that it’d cost 80p. We then asked them how much they liked the chocolate on a scale of 1-10.

The results? Charm pricing had zero effect on taste. The experiment helped dispel the myth about charm pricing and it cost about a fiver in chocolate.

What example can you give of a choice created for us by a brand?

One of the most influential examples of nudging comes from the 1930s. Back then diamonds weren’t the unthinking choice among people about to propose. People were as likely to buy emeralds or sapphires as diamonds.

That changed with perhaps the best advertising campaign of the twentieth century. De Beers made diamonds the natural choice for romantics by linking the durability of the stone with the eternal nature of true love. Frances Gerety’s 1947 tagline, “A diamond is forever”, helped forge this link brilliantly.

However, as Rory Sutherland has said, it’s only the second-best line that De Beers coined. Even better was the copy persuading consumers to pay eye-watering sums for diamonds. De Beers did this by telling consumers that the appropriate budget for a ring was a month’s salary.

This is a simple application of the psychological principle called anchoring. If you mention a number, even an irrelevant one, people can’t help but be influenced by it. People recognised that a month's salary was slightly arbitrary but they used it as the starting point when reflecting on how much to spend.

In the years afterwards, De Beers realised they were onto a brilliant idea. They then introduced the idea in the 1960's in America that actually you should pay two months’ salary. And then people started increasing how much they paid.

And then in the - I think it was in the 1980s - when they launched in Japan, a country with no tradition of engagement rings at the time. They suggested that men should spend three months of salary on buying an engagement ring. So they've kept on ratcheting up the benchmark and it has literally made them billions of pounds. A simple application of a bias created one of, if not the most, successful campaigns in the world.

The Choice Factory: 25 behavioural biases that influence what we buy, published by Harriman House, is released on the 12th Feb and is available from Waterstones and Amazon.