Geoffrey Precourt, WARC’s US editor, muses on some advertising strategies that were all the rage in his youth.

Twice in the last couple of months, the airline industry has conspired with the forces of nature to take me on an unexpected detour. And on each occasion, I kept running into advertising platforms that I’d long since forgotten but which, in their time, were cutting-edge tools of what we didn’t yet call consumer engagement.

A couple of months ago, an ice storm rerouted me to Boston, about 110 miles short of my destination in Portland, Maine. On the cusp of my hometown’s financial district, 17 years of roadworks – a project known as “The Big Dig” – had dropped a central-artery turnpike below ground.

On that icy Friday afternoon, giant messaging from my past had brought neon coloring to the Rose Kennedy Greenway. Advertising icons from my youth – each one culled from a very off private collection – welcomed my back to a city I had learned to love in the ’50s and ’60s.

There was Topsy the Chicken, the flapping-forever oversized clucker who nested along the VFW Parkway for a half-century, a beacon for neighborhood folks as well downtown pols who wanted a quiet place to huddle. 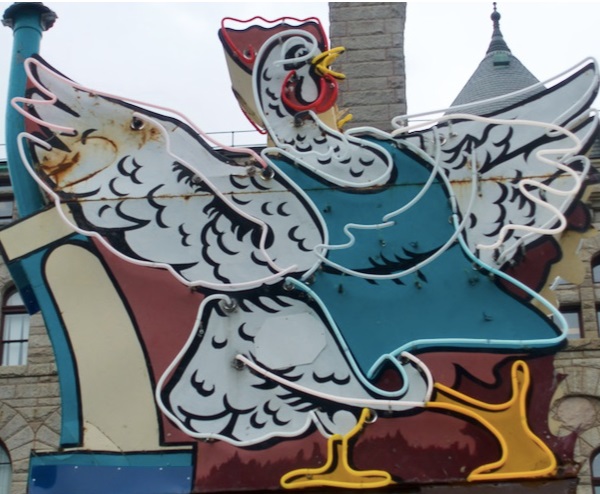 Bay State Auto Spring’s legacy might not have been as romantic. And, even though its signage was a bit worse for the wear, from 1965 to 2000 its neon alert signaled truck drivers from all over the Northeast that they’d come where they could find a new set of brake springs. 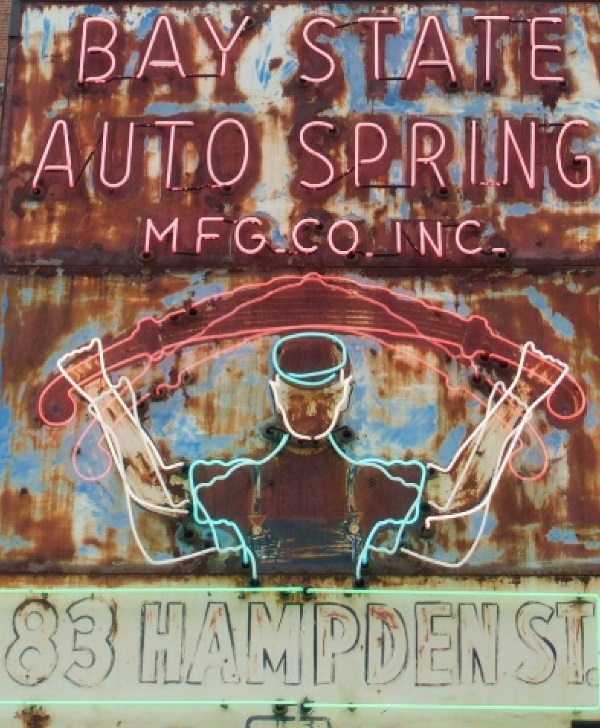 Neon was a powerful roadside attraction and the Siesta Hotel electronic signage (boasting “TELEVISION” as an upper-case value add) promised comforts to travelers on their way out of Boston. 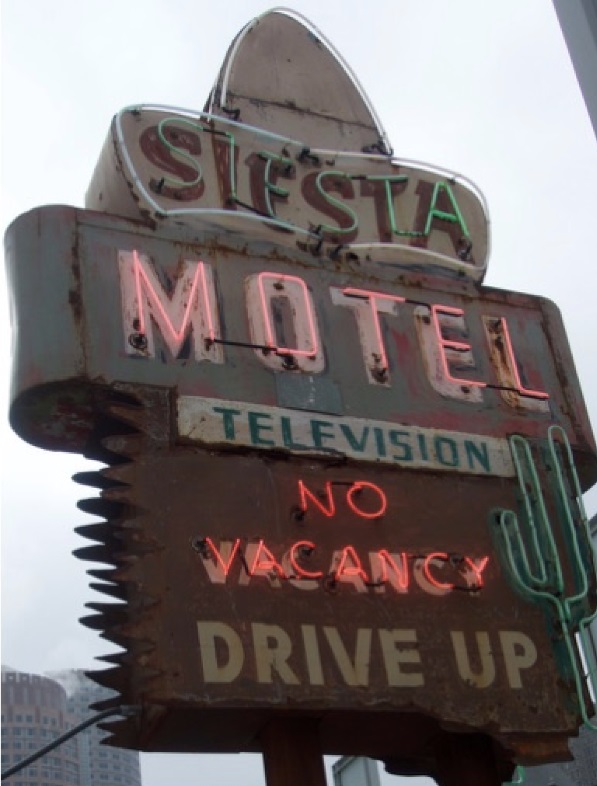 This traveler didn’t need a hotel room last weekend when an East Coast snow storm complicated my flight home from London. And, again, advertising was a distraction that kept me occupied.

Between 1966 and 1968, paper dresses were a new kind of social medium that had their own kind of viral excitement. And a pop-up show of yet another eccentric collection – the Atopos cvc Paper Dress Collection that was first assembled in 2007 and has since traveled the world – landed at the Hellenic Centre in Marylebone last week.

Brands that were smart enough to glom onto the fashion – among them candies such as Baby Ruth and Butterfingers as well as Campbell Soup – learned what digital marketers have discovered in the 21st Century: moving your brand media selections (call the paper dress an out-of-home party-venue placement) in unexpected directions will give you exposure to audiences that otherwise missed your messaging. 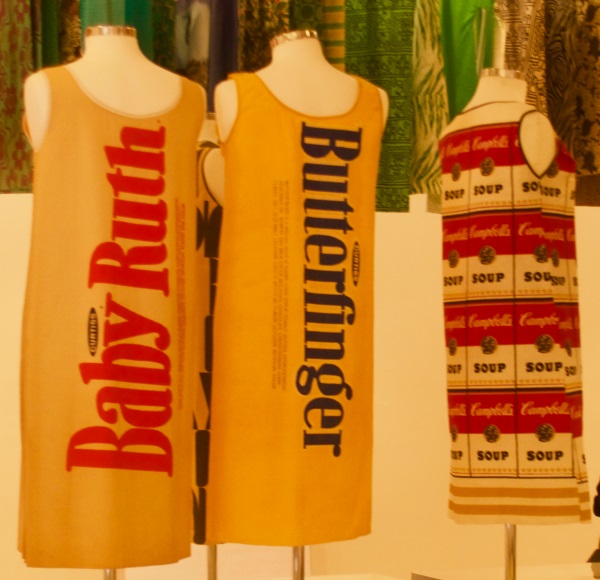 Time magazine’s promotion department, the show’s sponsors recounted, created a white dress with a black op-art rending of the publication’s logo. The piece was delivered in mid-February, packaged in a red box, to the weekly’s key advertising targets. The note inside: “For your ValenTIME for every week in homes like yours across the country, some six million women slip into a little black-and-white print that’s just their taste and interests: Time, the weekly news magazine.”

Hallmark Cards legendarily tapped into the paper-dress movement with a new kind of greeting, for Valentine’s Day and any other kind of special occasion – a card that carried a high-fashion piece of wearable imagery. 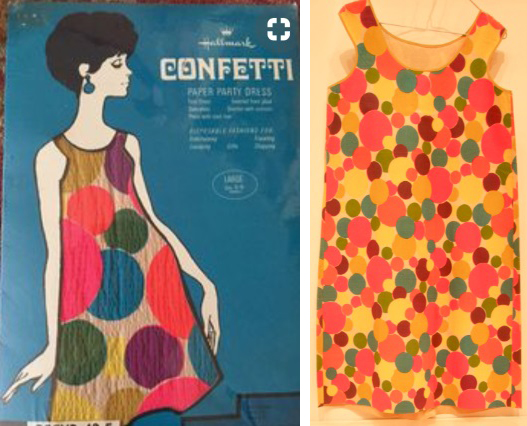 Paper dresses as an advertising medium didn’t have a long shelf life. Indeed, as one visitor to the Marylebone show recalled, “I loved my Hallmark dress. But it was one and done.”

But, for this visitor to London on a business trip that lasted two days longer than planned, what else could give me shelter from the weekend storm back home than the vision of a paper Bob Dylan dress? 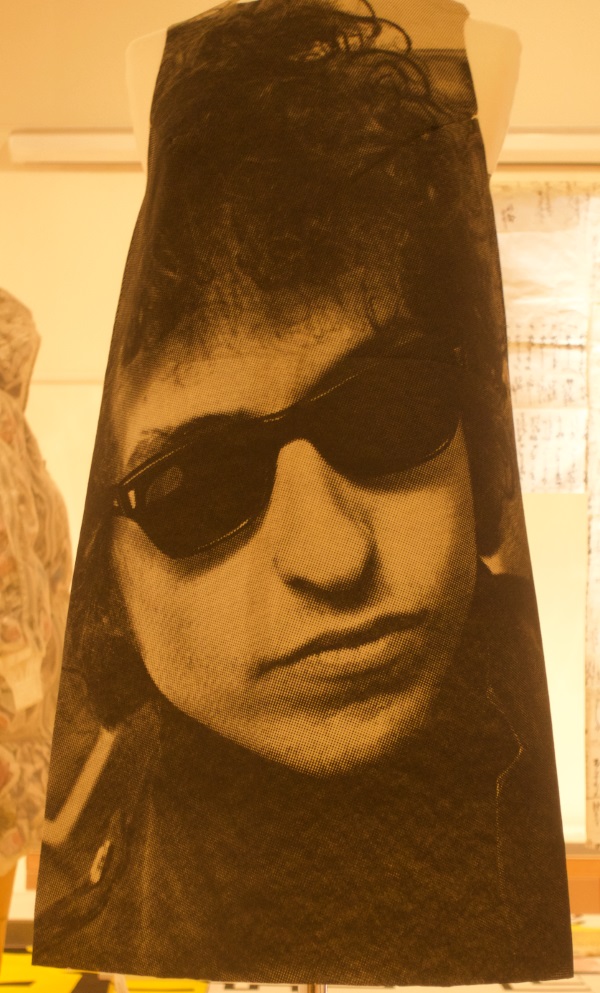 GLOW, an exhibition of neon advertising signs from the Greater Boston area, will be on display in the Rose Kennedy Greenway through April 2019. The #TextMe_Paper Fashion Show will be on display at the Hellenic Centre (16-19 Paddington St.) in Marylebone through February 24.