National newsbrands recorded a decline in advertising expenditure of 4.8% overall in 2013, according to the latest data from the Advertising Association/Warc Expenditure Report released last week. While this total incorporates both print and digital advertising revenues, the increase for digital (+19.5%) is still not enough to offset the fall for print (-7.5%). But this looks set to change in 2015.

The long-term decline for print media, in terms of both advertising expenditure and circulation, is well documented. The trended data in the chart below show the rapid drop in print advertising spend for national newsbrands over recent years. The sector was worth £2.3bn at its peak in 2000, but had declined to just £1.3bn by 2013 – a fall of 43%. 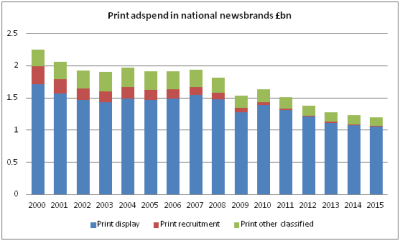 While display and 'other classified' have shrunk more or less proportionally, print recruitment advertising spend has been all but eradicated over the last 13 years – down from £272m in 2000 to £16m last year. While the drop in 2009 can, in part be accredited to the faltering economic landscape at the time, the general shift has been away from print to online. According to the Expenditure Report, online recruitment specialists had adspend of £194m in 2013.

But newsbrands have countered the trend from print to digital cannily, in many cases increasing readership by migrating to vast digital ventures; trading the ink left on the fingers for the whirr of the microprocessor. Advertising expenditure is now also starting to reflect this change. 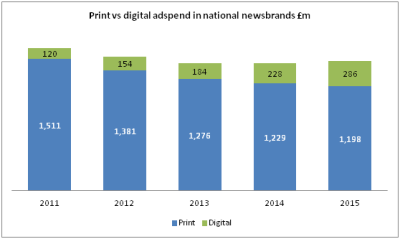 By 2015, we expect advertising expenditure in national newsbrands to increase. Following a marginal dip of 0.2% this year, we expect adspend to rise by 1.8% next year. This will be due to a combination of factors: the decline in print is forecast to flatten, as those advertisers for whom print provides the best return on investment remain loyal to the channel, while the rise in digital revenues starts to accelerate (by an anticipated 25% year on year in 2015).

Newsbrands – whether in print or online – will be with us for some time yet.