“It’s advertising, but shouldn’t act like it (even though it should definitely be labelled as such)” – Ryan Skinner, analyst at Forrester

A nascent advertising platform, native advertising is gaining an increasing amount of attention in the marcomms industry. Indeed Warc recently reported that growth in the sector is gathering pace, with Mozilla, the internet browser, joining the likes of other media owners such as Facebook, Hearst Newspapers and Pandora, the music streaming service, in developing native strategies.

So we thought it was time to take a closer look at this growing media platform.

Native advertising has yet to be clearly defined. Should it be considered as synonymous with the various other terms for advertiser-funded content – from branded entertainment to content marketing – or is it something completely distinct? According to Altimeter it overlaps with existing definitions of sponsored/branded/custom content, as well as advertorial. Differentiation can border on splitting hairs".

When concepts are ill-defined it can be helpful to establish what it is not. "It's not a banner ad. It's not a 300x250, not a 728x90. It's not a pre-roll. And it's not a print ad”, was the consensus of a variety of panellists speaking at the ad:tech conference in San Francisco in 2013.

And the aforementioned Ryan Skinner offers this definition: native advertising, he says, is “any form of paid or sponsored content that directly and transparently contributes to the experience of the site or platform where it appears, by aligning with the format, context or purpose of that site or platform’s editorial content”.

Or put another way, “it's branded content which fits 'natively' within the environment… typical brand activity, for example, would be an article on The Huffington Post on how to avoid running injuries – sponsored by and including expert input from trainer manufacturer New Balance.” That's according to Darika Ahrens, a former analyst at Forrester.

Ill-defined as the technique may be, this has not stopped brands increasingly focusing on native ads. Just think how often you encounter native advertisements in the form of Facebook’s Sponsored Stories, Twitter's Promoted Tweets and Spotify’s Promoted Playlists while browsing your social media accounts, for example. 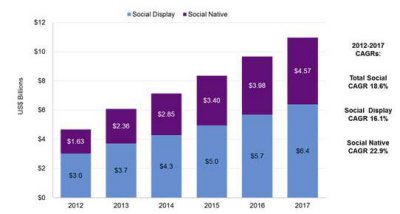 With a broad industry consensus emerging that banner ads are not cutting the mustard in terms of consumer engagement and ROI – I'm sure you've heard the oft cited stat that web users are more likely to survive a plane crash, or win the lottery than click on a banner ad hence online publishers are desperately seeking new ways to boost revenue. And although there is growing optimism surrounding native strategies, recent blunders serve as a warning to publishers and brands to proceed with caution when entering this space.

One of the issues native advertising must overcome is clearly defining the line between advertising and editorial content. Any lack of transparency on this crucial point will inevitably raise concerns about editorial neutrality. Such was the case when Shape, a US magazine, owned by American Media, recommended its own product - Shape Water Boosters – under the caption ‘news’, not ‘advertisement’. Perhaps unsurprisingly, this issue of labelling ended up attracting scrutiny from the Federal Trade Commission and National Advertising Division (NAD), an organisation that promotes effective self-regulation within the ad industry. A NAD ruling found the magazine “blurred the line between advertising and editorial content in a way which could confuse consumers”.

NAD went on to explain how readers “attach different weight to recommendations made in an editorial context than recommendations made in an advertising context.” As such, the ruling concluded that Shape should “clearly and conspicuously designate content as advertising” when promoting its own products within its own publications. In other words, it should have been transparent about the link between what it published… and who paid.

Elsewhere, The Atlantic, the online news brand, (which tags paid-for posts as ‘sponsor content’), found itself the centre of attention for all the wrong reasons when it ran sponsored content by the Church of Scientology. Why all the fuss? Well, this controversial organisation’s views were (to put it mildly) seen by many Atlantic readers as contrary to the magazine's status as a long-running publisher of independent intellectual commentary on society; the backlash was so strong that the ad was removed; the Atlantic subsequently posted an unreserved apology:

"We screwed up. It shouldn't have taken a wave of constructive criticism – but it has – to alert us that we've made a mistake, possibly several mistakes. We now realize that as we explored new forms of digital advertising, we failed to update the policies that must govern the decisions we make along the way."

This debacle has led to the magazine conducting a review of its advertising guidelines, which now include the following provisos:

So how can publishers and brands avoid falling foul of such blunders?

New York Times: PAID FOR AND POSTED BY…

Clear, transparent labelling is paramount. Dell, the IT giant, is the first advertiser to apply native advertising on the New York Times’ site. The post is clearly labelled ‘PAID FOR AND POSTED BY DELL’. Clearing up any remaining confusion, the post also states: “This page was produced by the Advertising Department of The New York Times in collaboration with Dell. The news and editorial staffs of The New York Times had no role in its preparation”.

Meanwhile, a recent article by Advertising Age outlines the processes behind the Times’ native advertising programme, including:

A good example for all publishers to follow. But I'd add a few, more general tips – with one common theme: