Portraying diversity and inclusion in ads is a good thing, says Raafi Alidina, a consultant at Frost Included, but it’s not something to be ‘done on the side’.

In a recent slate of ads for the popular chocolate Maltesers, topics being discussed by the characters in the ads have been a bit unusual. In one, you see a group of older women sharing the chocolates with each other while one tells the story of getting a hot flush during a presentation due to menopause. In another, a group of young lesbian women are talking about one group member’s lack of dating success, joking that she’s being discriminated against for being an accountant.

The fact that these ads are noteworthy and have caused a stir highlights how some very normal topics in life can become taboo or hidden when they aren’t represented on screen. Moreover, they show how those who might be considered a bit different from the norm – older people, lesbians, disabled people – have many of the same kinds of issues as everyone else. Just like those from majority groups, they embarrass themselves at work, they struggle with dating, and are perhaps much more similar to majority groups than they are different.

Mars, the company that makes Maltesers, is hardly the only organisation that is beginning to make diversity a central theme of its advertising campaigns. BT Sport has released ads promoting gender equality and multiculturalism through sport. Lloyds Bank has run a number of ads to promote mental health and the impact of subtle discriminatory language at work. Companies all over the world and in every industry are focusing on diversity and inclusion, and are ensuring that their advertising highlights its importance in the company’s mindset.

This is a far cry from the typical organisational approach to diversity and inclusion just a few years ago. In the past, companies adopted a very basic “Diversity 101” approach. It was a very compliance-driven approach that focused on ensuring the company was meeting all requirements it was legally obligated to. It was about attaining a minimum, not adding value per se. Any impetus for change came from changes in legislation.

More recently, many organisations have moved to what we call a “Diversity 2.0” approach. This is much more marketing-driven. These organisations have recognized that in this day and age, globalisation has made diversity a fact of our societies. Their consumer markets now look very different than they might have 30, 20, or even 10 years ago, and they recognize that those consumers want to be reflected by the organisations they buy from. Putting diversity at the centre of a major ad campaign is a good signal to these diverse populations that they understand these needs.

However, while these efforts are certainly worth a bit of praise, they are also insufficient. When these ad campaigns are not backed up by concrete action, it can create a feeling of inauthenticity. This can make the dominant group feel good about themselves but make the minority group you are trying to attract even more cynical and less likely to join in. It causes a credibility gap that can actually make things worse in the eyes of the public.

As such, the most successful businesses on diversity and inclusion – and businesses that will more likely thrive in the long-term – have adopted what we call the “Inclusion 3.0” approach. This is where diversity and inclusion initiatives are not something done on the side, but rather are a key aspect of the way they do business. In this way, inclusive thinking is embedded in all the decisions they make, creating the conditions for a more organic increase in diversity in the company and a more inclusive environment that makes everyone thrive and work together more productively.

The increase in diversity-centred advertisements suggests that these companies have moved into either a Diversity 2.0 or Inclusion 3.0 space. If they are in a 2.0 space, these advertisements would simply be in response to a changing society and reflect a desire to keep up with the times. As such, while their ads might talk a good game about diversity, their real work might leave something to be desired. Such might be the case for, say, Lloyds, considering that despite all its wonderful new ads and award-winning work in diversity overall, it still has a gender pay gap of 42%.

However, if it adopted a 3.0 approach, these ads would be backed up by real action. Mars might be in this space, which is reflected by a smaller gender pay gap (women earn 8% more on average than men according to UK government data) and fairly high ratings on Glassdoor (3.9 overall). While Mars likely still has some work to do, it seems to be approaching diversity and inclusion with a sustainable and authentic mindset.

Therefore, while both types of approaches lead to more diversity in advertising, the Inclusion 3.0 approach means those ads are driving societal change rather than just attempting to catch up to a society that has already changed.

You might think that it isn’t such a big deal to promote diversity and inclusion in marketing campaigns, but the truth is that advertising is a critical player in the way we see the world. What we see in the world around us whether in print, on TV, or in the office, subconsciously tells us what is normal. If all we see on TV are white, non-disabled men, then we don’t notice when they are the only people in the room. And this can have major consequences.

For example, recent studies have shown that self-driving cars seem to be worse at detecting darker objects than lighter objects. This includes darker skin tones. As a result, black and brown bodies are more likely to be hit by self-driving cars than white ones. This is obviously a horrible outcome, but it has happened in part because the data that was used to train the object-detection algorithm in the car was almost entirely composed of white pedestrians. But because rooms of entirely white people is what we’re used to – it’s what we see In magazines, on TV, in adverstisements – we don’t even notice when our data is biased in this way, leading to catastrophic results.

In this way, diversity in advertisements can be extremely important. Whatever the reasoning behind it, diversity on camera is a necessary step toward greater societal equality. But if the organisations running those diversity-centred ads want to be at the forefront, they need to lead with an embedded inclusion approach. These ads can only be the first step.

Raafi Alidina and Stephen Frost are the co-authors of new book, Building An Inclusive Organisation, published by Kogan Page. 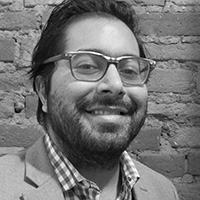 Raafi Alidina is an associate of global diversity and inclusion consultancy Frost Included and is the co-author of new book Building An Inclusive Organisation, published by Kogan Page.