Advertising expenditure in magazine brands dipped 6.7% year-on-year in Q2 2014 to £254m, according to the latest data from the Advertising Association/Warc Expenditure Report released this week. This is the 35th consecutive quarter of decline for the sector, with growth last recorded in Q2 2005. But, according to the latest forecast, adspend growth should finally return for magazine brands – including both print and digital platforms – this time next year.

Of the print media, it is magazine brands (alongside the regional press) which have fared worst as spend has shifted online. Looking at the chart below, we can see that from a peak in 2000, print advertising in magazines has more than halved, dropping from £2,020m to just £786m in 2013. 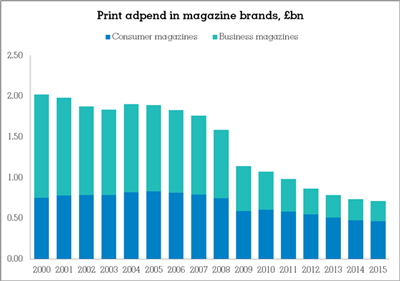 Within this total, the business and professional magazine titles have been hit hardest. The sector has recorded a 77% drop in advertising spend since 2000, falling from £1,270m to £280m last year. By comparison, spend for consumer titles has fallen by a more modest 39% since its peak in 2005, from £827m to £506m. This difference can largely be explained by the business and professional magazine brands' reliance on classified advertising. Back in 2000, classified adspend in business magazines accounted for 40% of total advertising spend, equivalent to £512m. By 2013, this had dropped to a 16% share – or just £45m.

However, while both display and classified advertising are predicted to record further declines in print magazine brands both this year and next – digital advertising revenues for the sector overall are now registering consistent growth. 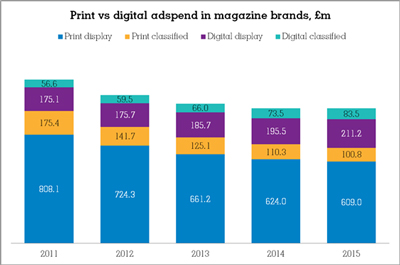 This rise for digital should also stem the sector's overall decline in advertising revenues. We predict a rise of 0.1% in 2015 – magazine adspend's first year-on-year growth since 2004.

Commenting on the AA/Warc Expenditure Report, PPA CEO Barry McIlheney said: "The projected rise in magazine media advertising spend for 2015 is testament to the increasing confidence that advertisers have in today's modern, multi-platform magazine brands.

"The ongoing growth of Digital Editions is encouraging for our sector, and it should also be remembered that this does not include the myriad number of other ways – websites, live events, social media, etc. – in which magazine brands now engage directly with their consumers.

"The launch in January of Project Orange, the new magazine media marketing body under Sue Todd's leadership, is perfectly timed to capture and develop further this renewed passion for PPA members' brands." 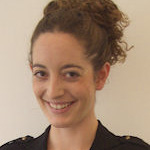