Alexandra Curley, Insights Director at Spinnaker, a digital marketing agency based in London, shared findings from its new report, Defining Foodies, at a breakfast event held in central London last week. This explores the growth of the Foodie phenomenon and seeks to understand the attitudes and behaviours of Foodies, people it defines as having "a particular interest in food".

Although the term 'Foodie' has been around since 1980, in recent years there has been a notable increase in all things food which has fuelled an interest in such things as home-baking, food provenance, authentic ingredients and pop-up restaurants.

And according to Curley, the economic downturn of 2008 was a major driver in the renewed interest in food, and the subsequent increase in Foodies, because budgets were tight and 'staying in' became the new 'going out', she said. Indeed, from 2007-2012, Britons spent more on food and drink at home with sales of home-baking goods growing by 84% during this time. And social media analytics data shows that in the UK there were 2.7k online mentions of the term 'Foodie' in 2007. This grew to a whopping 191.9k mentions in 2014. 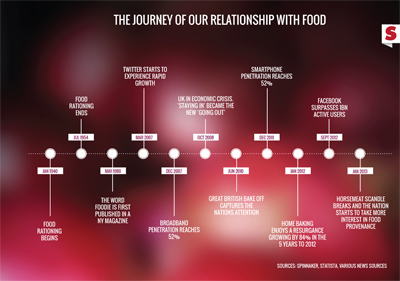 Such phenomenal growth does warrant exploration. So Spinnaker interviewed 2,029 UK internet users age 16+ to find out who Foodies really are and what makes them tick.

The study identified three different types of food consumption behaviours: 22% of respondents regarded food as a purely functional process and fell into the 'food as fuel' category; a majority 55% were identified as 'fledging Foodies', who have an interest in food and are somewhat experimental in the kitchen; 23% were deemed 'Foodies' – passionate about food and users of social networking platforms to enhance their relationship with it. This group seek out online communities to share their interest in food with 49%, declaring that interacting with brands online makes them feel like part of a community. 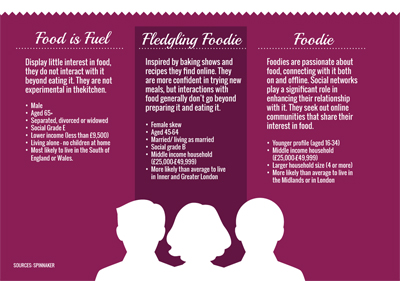 And here are some further top-line stats from the report:

The study also revealed that becoming a parent can lead to a renewed interest in food; in particular, parents develop a preoccupation with the provenance of the food they feed their children. Households with children aged 0-4 have a higher proportion of Foodies than those with older kids or no children. Food scandals, such as the 2013 discovery of horsemeat in ready meals, have also driven interest in food provenance.

Foodies tend to be experimental and are early adopters of new food and as such they are receptive to brand engagement, Curley explained. In particular they are open to discounts and special offers (51% vs 26% average). And younger Foodies utilise social media channels for bragging rights: making a statement to friends is a reason that 25% of Foodies have interacted with brands.

Lastly, Curley offered this advice for brands wanting to reach the Foodie fan: