With the FIFA World Cup later this year and the Rio Olympics in 2016, the eyes of the world are on Brazil.

And no wonder, really: it is currently the world's sixth largest economy. It has a population of 200 million and is a cornerstone of the fast-growing Bric nations, one that has seen 42 million people come into its middle class since 2003 with a 78% increase in per-capita income. 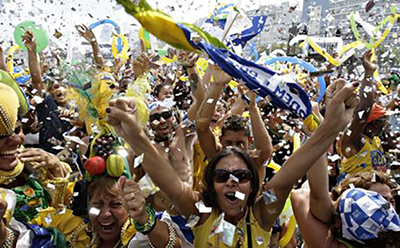 But it remains a complex country in which to do business. The red tape affecting international investors, particularly with regard to setting up a new company, is infamous – as is its tax structure.

There's also a diverse economic fabric with acute social, economic and educational inequalities: the affluent have access to the best the world can buy and the rapidly-swelling middle class has new access to goods and is moving the economy, but many people still struggle through state support and welfare.

Not to mention that Brazil's infrastructure is well below its economic level. It has a huge geography to cover and underdeveloped transport networks, leading to a logistics and distribution challenge. Be aware too that the mobile network infrastructure required for smartphones has focused on large urban centres. This presents issues for marketers, who until now have had to rely mainly on SMS marketing.

Despite their wide ethnic diversity, Brazilians have managed to craft a strong sense of national identity mainly expressed through music, food and sports. When it comes to the latter, it seems that hosting the World Cup and the 2016 Olympics is provoking mixed reactions. They're boosting national pride, but creating frustrations with the lack of planning and the costs well above budget.

The role and value of marketing

As one the world's few Portuguese-speaking nations, Brazil has historically looked inward with its own big national brands as well as the major international players. But now Brazilians are increasingly looking abroad, as demonstrated by the fact that AB InBev is now owned by a Brazilian investment fund and the CEO and all major management are Brazilian.

Marketing and advertising are quite advanced. Multinationals have been established in Brazil for decades (eg Unilever, Colgate-Palmolive, Néstle) and brought professional practices with them from the very beginning.

Its domestic companies understand the value of brands, and for them marketing is the main driver of growth and value. Some (such as Natura cosmetics and Petrobras Oil) are known internationally and have presence in several countries.

There are several examples of world-class creative marketing practices, not only with local brands but also with international brands like Dove. The award-winning global campaign that portrayed how women look in sketches by an FBI artist was created and produced for Dove by one of Unilever´s agencies in Brazil.

Furthermore, internet and mobile penetration have been growing rapidly, boosting the country's digital marketing footprint. Smartphone penetration is up to more than 50%, it's the number two country on Facebook ranking, and it leads the world with 75% of devices being used for social networking, all according to Nielsen.

Key trends in marketing and media

TV is a massive channel dominated by Globo TV, the world's third-biggest network. Its influence is such that by law media planning agencies are all represented by their creative agency partners in Brazil rather than directly – a situation that can be odd for marketers to work around.

It may also be surprising to some that football is second to soaps. Soap operas go out at 9.00pm so no football can be scheduled at that time; they're watched by everyone and the whole country stops when a season finale airs. These shows are watched in 46% of households and are a primary channel for marketers.

In fact, Globo has been exporting its soap operas worldwide. Its latest hit, Avenida Brasil, was shown in 106 countries and translated into 16 languages.

As for marketing, a key point to note is that there is a chasm between "elite" (eg the best Brazilian universities and MBAs abroad) and "mainstream" education. This has formed an elite of marketing professionals that tend to gravitate around multinational firms and leading-edge national Brazilian brands such as Petrobras, Itau-Unibanco or Embraer.

As in Western nations, Brazilian marketers are integrating strategies and teams for coordinated brand development, pushing content marketing and using social media to play on the Brazilians' love of sharing and socialising. These integrated campaigns are just now beginning to play on the experiences that arise from the World Cup and Olympics.

Of course you can never generalise about an entire nation, but our experience has highlighted some interesting insights:

Join the conversation @brandlearning and on LinkedIn. Sign up to hear the latest, and please do join in.

This post is by Mhairi McEwan, CEO & Co-Founder at Brand Learning