The most effective examples of hashtags in ads have been where they lead the way to a social media campaign, which engage the audience and speak their language.

We've all seen it, either on billboards, or TV ads, a message slapped into the hashtag, #tweetthisplease as if just by having a hashtag on the ad people will automatically, magically reach for their phone, or laptop and start tweeting, helping the brand, and the agency, deliver that word-of-mouth traction on social.

Real life, though, doesn't work like that. Why would we start tweeting about an ad just because it has a hashtag? It's not the hashtag that will motivate us to tweet, but the creative that hits those right emotional trigger points. An effective hashtag, though, can expand on that conversation to trigger sharing, add context, or channel it in a more meaningful way. What it shouldn't feel like is an afterthought, integrating social into above-the-line campaigns is not whacking a hashtag on to the back of an ad, but using it to place social thinking at the heart of the ad. Hashtags in ads should:

Be actionable. Look towards the community: Land Rover's #hibernot ad tapped into the brand's adventure credentials, reacting to the negativity that can surround winter, with dark days and grey weather, by placing itself firmly on the side of people who use this time to choose adventure. It also worked because it recognised social media offered a chance for the public to tell their own #hibernot stories. It tapped into people's sense of pride in doing something and a desire to document it.

Land Rover leveraged this on its social channels and created a dedicated microsite for inspiration and for people to upload their #hibernot adventure. To Land Rover's credit, it used the big splash of using an ad not to promote a new vehicle, but to expand its brand voice, co-opting its community via social to amplify the ad and develop the meaning.

Use the language of the community: Adidas' #therewillbehaters campaign (whether we like the sentiment, or not) typified a theme and terminology widely used in everyday life and put social culture at the heart of the creative. The hashtag was the climax to an ad that showcased resentment and the Twitter culture of trolling and was the conduit to provide context to viewers: any type of success will be knocked with 'hate'. It provided a meaning that enabled it to be amplified and used by adidas assets and the public in their everyday communication in an organic/natural way – the success of which is that it has now been appropriated for normal Twitter terminology. These are what the best hashtags should be doing: offering a terminology that fits with the attitude of the community and extends the impact of the ad to its social channels to communicate its meaning via its assets, or/and its owned channels.

Give us a hero/focus viewers' thinking: Even the best creative leaves nothing to chance. John Lewis do great Christmas ads. The brand has managed to systematically hit all the right emotional trigger points: unusual friendship, kindness and acoustic covers of popular songs to dominate social conversation. It also understands how to use a hashtag to direct the conversation and present us with the star. Before last year's campaign launched, John Lewis teased the ad with posters of the penguin with #montythepenguin. Post-launch, there was a Monty the penguin Twitter account. John Lewis had a fully integrated campaign that made sure our focal point was #montythepenguin – it could have been something more nondescript, or branded, but by ensuring it was Monty, it gave us the star and further personalised the ad (and provided toys in store where the audience was able to buy Monty the penguin). 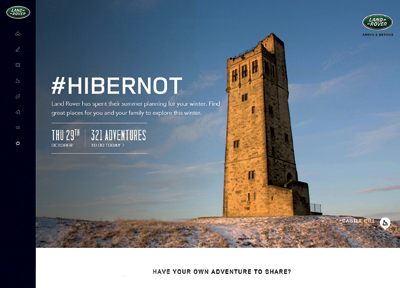 All these ads are different, the commonality is the integration, and where a hashtag was the lead on to a social media campaign instead of a dead end – where it can enable the consumer to take their enthusiasm for the sentiment expressed and document it (#Hibernot), represent a culture seen in everyday life (#therewillbehaters), or bring us the hero (#montythepenguin) it wasn't just a brand broadcasting at the audience, but understanding why people share, valuing their engagement – and, by extension, amplifying the core message of the campaign.