Today’s consumer now spends more time on the mobile internet than desktop, and this year mobile will become the new leader in time spent. The US is expected to see three hours and 43 minutes of engagement on mobile versus TV’s three hours and 42 minutes – a trend expected to be followed worldwide.

Marketers wanting to reach the consumer in the here and now, in their most personal of environments, should increasingly do so via mobile advertising, specifically video advertising.

According to the IAB’s first half of 2018 ad spend study – the most recent available – video display accounted for around £967m, a 40% year-on-year increase. It was by far the fastest growing sector in the channel, meaning that almost one in every six pounds in digital is spent on video.

Yet, when it comes to the smallest screen, marketers still insist on taking their cues from television or cinema. Episodic, long-form content with sound at its heart. Why?

If marketers and agencies are serious about “mobile first” they need to reimagine the way they optimise their advertising. Here are five ways to be a more effective mobile marketer.

1. The tyranny of TV

Television’s legacy too often dictates a standard duration, shape of ads and a certain form of storytelling. The average duration of creatives that we receive from clients to deliver on our platform is 25 seconds.

Research conducted by Teads and Realeyes, with 12,000 consumers viewing 166 six-second ads, showed that short mobile video ads can engage viewers as much as their traditional TV predecessors, as long as brands keep the messaging simple and the storytelling concise.

Adapting the narrative to mobile is a key driver for success. While typical storytelling for TV ads starts slowly and peaks emotionally at the end, ads on mobile need to grab attention and show branding right from the beginning: remember, only 4% of ads are looked at for a least a second.

In the example below, only 30% of the impressions were still on when the brand appears on screen. 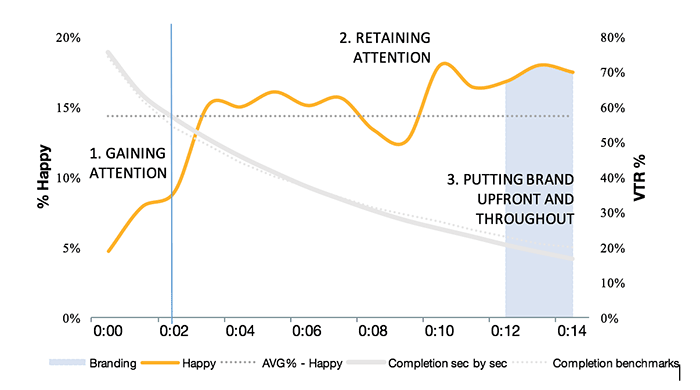 This problem can be easily fixed by adding a skin with a brand logo or a key visual of the product to strengthen the visual impact of the ad and foster message association.

If your objective is completion, it’s important to find creative ways to encourage people to watch the entire ad. Looking at the drop-off curves and the emotional reaction second by second can allow you to identify weak sequences and remove them if you observe a big drop in engagement.

2. Break silos for engagement and conversion

Break the silos between the type of disciplines, formats, real world versus virtual world, and embrace convergence.

By combining data and dynamic creative technology, advertisers can create multiple versions of a creative execution, so audience segments see specific creatives tailored to their tastes.

For instance, when testing standard ads versus creatives with bespoke messaging for a target audience for an automotive brand, we saw an 29% uplift in brand favourability, and 48% in purchase intent.

Video campaigns can also be complemented with innovative display formats that will trigger the memory of users exposed to the video ad and amplify the impact of your campaign.

3. Consider sound. When is it needed?

Most marketers believe that audio is a critical element in making successful TV ads, but the consumer behaviour toward sound is really different on mobile.

We tested both the sound on and off version of more than 240 ads to measure the impact of sound in terms of emotional engagement and branding.

Sound-on ads had an average emotional score of 3.7 (in a scale of one to 10) whereas sound-off ads scored 3.6, meaning they performed as well as their sound on counterparts.

Interestingly, we had as many as a third of ads that performed better with sound off. In most of those cases, confusion from conflicting subtitles and voice-overs resulted in reduced emotional impact.

To solve this, marketers should leverage smart subtitles, which disappear when the sound is on.

4. Get interactive to drive action

Remember the green button? Probably not. Nobody clicks on a TV interactive prompt and as a result many video ads from creative agencies do not include any kind of interaction.

Instead of just watching your ads, consumers can interact with them or even speak to them. Go beyond the linear story and take advantage of technology to create unforgettable experiences.

Research on six-second ads, for example, shows 84% have no call to action. By adding one, an advertiser can dramatically improve the results of a campaign not only on click through rates but more bespoke measurements.

Let’s face it: nobody would consider launching a TV ad without testing it first, so why are ads delivered on mobile not tested on mobiles? Why – particularly with the range of formats available today – would that static box in the corner give a true view of an ad’s value on the small screen?

Advertisers should test, learn, listen and repeat to understand which of these new levers will work best.

As mobile, and particularly mobile video begins to rival TV in terms of spend and prominence, it is time to think differently and challenge our traditional assumptions of what great creative looks like.

We see a new paradigm in video advertising where effective stories can be told in far less than 30 seconds, videos play in harmony with the user’s interaction and are not forced, and video leverages best-in-class interactivity to maximise the impact of the medium and to provide the highest quality user experience.

TV and mobile video may share many of the same attributes – motion and (sometimes) sound. But in many respects they could not be more different. It is time for marketers to take “mobile first” seriously. 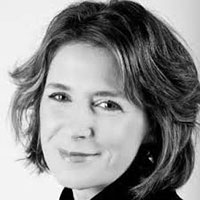