India’s recently-issued IT guidelines seeking to regulate content on social media, digital news and OTT are being viewed as excessive. While entertainment content should not be left unmonitored, there must be a more liberal approach to crafting and implementing rules.

Amid the boom in over-the-top (OTT) consumption sparked by the COVID-19 lockdown, new information technology (IT) guidelines are being introduced.

OTT content has thus far been free of regulatory control, allowing it greater freedom than film or TV content. But the Indian government has since issued a set of IT rules to monitor digital content, creators and platforms.

Twitter, Facebook, WhatsApp and OTT players like Netflix, Amazon Prime, Disney+ Hotstar and Zee5, will soon have to adhere to IT guidelines, along with giant digital media outlets like India Today and The Times of India.

Digital news publications have also been set up by industry associations.

Together they reach over 450 million online news consumers across India – a really significant number.

External factors often drive very big changes in consumption patterns. For example, terrorism was a black swan event that changed our lives. People were forced indoors after 9/11; they were afraid to go out, thus making home theatres mainstream with investments in a whole category of DVD and Blu-Ray players, amplifiers and speakers.

The emergence of home theatres and large display screens may have had a role to play in the emergence of OTT platforms in India. During the lockdown, movie halls were closed and the linear TV studios couldn’t produce serial episodes, so viewers looked for newer forms of entertainment.

The early mover studios started to populate old content online and made them available to homes via the internet. But old wine in a new bottle wasn’t going to drive a major change.

What drove real change was when studios decided to skip theatrical release and go for OTT platforms. This triggered an ugly fight between movie studios and theatre chains but this war had just one winner – the viewers.

India has a very large and robust movie industry.

Indian movies are certified by the Central Board of Film Certification, which means the government is, in a sense, the censor.

Guidelines exist that cause producers to often be at loggerheads with CBFC chiefs. Even advertising spots shown in cinemas have to be certified by CBFC before being screened.

While films have to be certified, there is no formal process to certify TV shows although there is a Broadcast Regulatory Authority.

It does not regulate content but there are specific programming guidelines that channels are expected to adhere to. When they don’t, they have to apologise and even stop transmission for a while.

So by definition, both film and television content are not beyond oversight and this works very well for the government.

The issue of OTT control

With online video streaming platforms beyond any form of control, there is enormous creative freedom. Not bound by regulations, the creators tell a story often in a more provocative way, with language that will never be allowed on mainstream channels or even in films.

But many want these video streaming platforms to be monitored and censured, with over 20 petitions currently being heard in courts across India. The complaints range from:

But behind the smokescreen of religion and nationality, the real reason behind the cases is the desire to control what the citizens watch in the privacy of their homes.

I personally find the case against Amazon Prime’s executive to be excessive and the suggestion from courts to not give her leeway to be a bad example. This is like booking a movie hall executive for showing a film that a section of the audience may find offensive.

The new rules (not guidelines) are harsh and perhaps even place undue importance to online video streaming platforms. They will let the government block any channel, force the removal of content and file criminal cases against the executives.

The industry has serious misgivings as the monitoring committee will be made up of representatives from the bureaucracy.

Not having a wider and more eclectic committee is not good as the bureaucrats will have a limited view on what constitutes “good to watch” for the citizens.

The industry fights back

The matter now is back in court as the Foundation of Independent Journalism has secured a stay on the new guidelines. The stay is only meant for rules that apply to the news media and not to OTT players. This is a welcome development as the rules that govern news should not govern entertainment. After all, news is not produced content.

Is monitoring OTT a bad thing?

There is no answer to this question. Throughout the evolution of entertainment content in India, some monitoring has been involved. As a society, we want to monitor what our young ones and even our senior citizens are exposed to.

Social scientists stress that overexposure to violence and gore has adverse impact on some, so entertainment content cannot be left unmonitored.

However, the way rules are implemented has to be more liberal and break away from the socialist path with tight government control.

There was an uproar when radio was deregulated and Indians had to pay a radio licence fee, although it was strange that there was no protest about the licence itself. Today, liberalised radio is a massive source of information and entertainment.

So does India need an entertainment nanny? Our experience with independent regulators has been good and they have worked hard to ensure that rules are being followed in banking, insurance and real estate.

If our regulators can be fair – as they are where finance is concerned – then they can do far better in areas where entertainment (and emotions) are involved.

Naresh Gupta
Bang in the Middle 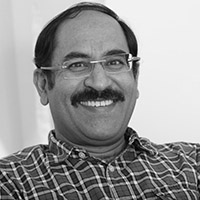 Founder & CSO, Bang in the Middle.
Get a demo
Topics
Send feedback