A great strategy can cause a big behavioural or attitudinal shift, achieved through communications, that solves a business problem for the client, says Bridget Angear. And planners have always dealt with these “upstream” issues.

One great example of upstream strategy is a recent IPA paper for Transport for London. They had a really interesting problem: in the run up to the London 2012 Olympics, TfL’s modelling showed that the city’s transport network would not cope with demand. In other words, they had to make people not do something they do every day - travel into the city - for the good of the country.

The team explored a lot of options before coming up with the final strategy, using channels ranging from direct mail to posters to PR. It was a really efficient campaign: a £30m expenditure effectively safeguarded £16.5bn of benefits. If they hadn’t solved the issue, London would have been gridlocked. That’s big, upstream strategy: communications leading to real change.

But of course, we as planners need to work “downstream” some of the time. Day to day, you are looking for big and small insights. You are seeking human truths, but also need to deal with smaller details –deploying the strategy across different media, for example. You’re constantly shifting between the big and the small.

It’s just that, at the moment, we have gone a little bit too small.

There are several reasons for this move downstream. These days, ideas have to live in more places, as we seek out the audiences we want. It means we need to spend more time working out “the ecosystem of an idea” –where the idea should live, how it should live, how it connects across all the different for channels and how to optimise it for each.

Another reason is that we can see in real time how an idea is performing. We can monitor it and optimise it as we go. Something that was simply not possible with more traditional broadcast media. Now it is possible, it requires time to do it. Another demand on the planner. Not that it isn’t useful. But it can mean the urgent takes priority over the important and we spend more time making little adjustments than addressing some of the bigger issues.

Part of this downstream focus is client-driven. They’ve gone to the Silicon Valley HQ, had a ride in the driverless cars, drunk the Kool-Aid and have come back believing that Facebook and YouTube are the future. When, in fact, while they are amazingly powerful reach media, it doesn’t mean they are the only thing we should be thinking about. As Byron Sharp has observed, there is now a desire amongst clients to brag about what percentage of their media budget they now spent on digital, rather than what the optimum mix should be.

This all means that, as an agency, we are asked more and more what I call ‘deployment questions’. Which in turn means we have less time to consider questions about where to take a brand over the longer term.

That’s the situation today. But I think this is just a moment in time, a blip. And this is because we are still in the process of working out what is and isn’t working: a beta phase of testing if you like. And once we know more, we will be able to plan accordingly and probably spend less time doing it. Not that I’m saying everything will go back to how it was. Just that more clarity around effectiveness will mean we have to spend less time experimenting.

Eventually, there will be a course correction. We – not just planners in agencies, but marketers in general – will realise that we have been a little distracted by ‘new’ media and that many of the principles we have always known to be true still are true. We will then be able to re-focus on some of the more upstream business challenges.

If I project forwards, I believe that planners of the future will still be asking and answering the big strategic question of how can communications help drive business growth. That’s my dream, anyway.

This commentary appears in WARC’s new ‘Future of Strategy’ report, based on a global survey of senior agency planners. The report covers the current state of the strategic discipline, future opportunities and challenges, and guidance on building the planning team of the future. 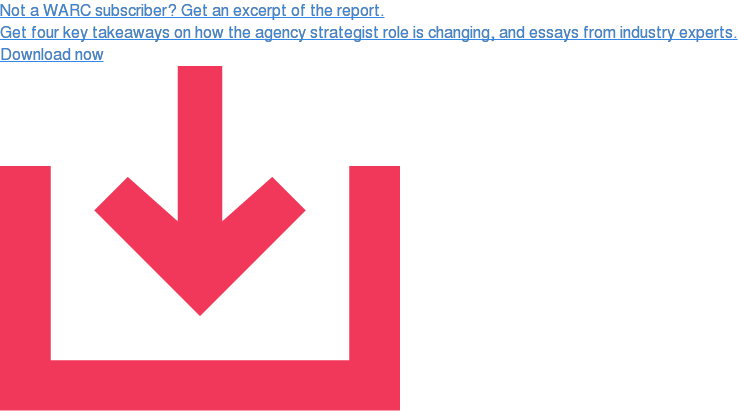