Jerry Daykin, Head of Global Digital Media Partnerships at Diageo, is chair of the judging panel for this year's WARC Media Awards partnerships and sponsorships category. WARC’s Lucy Aitken asked him about how Diageo does partnerships.

Describe your role at Diageo and what it entails.

I work at a global level to see how we can work with media partners who we’ve historically been engaged with at a local level. Those partners are primarily digital – Google, Facebook, Twitter and others - as they have the biggest span across the globe. I look at what’s best practice with those platforms and ensure that what’s worked moves rapidly around the business. It’s about taking a supplier-based relationship and making it into more of a genuine partnership.

Describe some of the partnerships that Diageo has in place across its brand portfolio. Can you outline how they have been successful in fulfilling brand objectives?

We did a great one with Amazon – a content and commerce partnership called World Class List – across our reserve spirits range.

To make content that’s good enough for people to want to watch it, we partnered with people who make content that people pay to watch. This isn’t just a brand-building exercise, it’s commerce because there’s a direct link through to purchase with them. It’s still early days for that campaign but we already have a great positive ROI in short term sales.

In one of your former lives, you led the social media activation of Cadbury’s sponsorship of the London 2012 Olympic Games. Describe what that entailed and how it was effective for Cadbury.

It was a really meaty sponsorship which touched the whole business. We had a community programme which ran for three years, getting communities to play more sports, and we had a phenomenal relationship with customers activating big in-store displays with Sainsbury’s and Tesco as a great way of driving sales.

2012 was early days for mature digital marketing and Cadbury tried some new things in digital and wasn’t afraid to fail. It also knew that, when games came around, everyone would want to be a part of it. It was slightly before the era of real time marketing, but we were there at the Olympic park, pioneering some of that real time stuff, but using media to do it at real scale. It was a great experience because it wasn’t just pure media partnerships; it ran through the whole business and involved different parts of it, such as corporate affairs and sales teams. The best partnerships crack the simple double act of driving both physical and mental availability. It’s easy sometimes to land the comms and marketing and have lots of messaging about how you’re working with that partner. Yet the bit that converts most effectively might be brought through to point-of-sale and that requires more upstream thinking further ahead. There is far more value for a partnership when you let different parts of your businesses tap into what you’re buying. From a partner perspective, a lot of activity can serve their needs too so it becomes a mutually beneficial thing.

What criteria can brands and agencies take to ensure that their partnership will work?

Success is founded in having a good understanding of both your consumers and your brand so that you know which partnerships will fit. Some partnerships require you to release some control so it won’t be the purest brand message – it’ll be a message somewhere between you and the partner property. If you want to get the most out of a content partnership with the likes of Buzzfeed or an influencer you need to be open to learning, and probably evolving your approach as you see what does & doesn’t work together, as a one off tactical brief you may not get as much value out. You also need to give them the flexibility to create something in their own style, and not expect it to be the same script you’d have got from a traditional advertising agency.

Brands may find such partnerships disarming at first because the best work usually happens a couple of executions in. For instance, pet-food brand Purina worked with BuzzFeed on its Dear Kitten series.

It started with lightweight content like listicles and the brand was willing to stick with it and a gem emerged. They stumbled on this personal view from the cat and turned it into the creative. It’s pretty far from a regular Purina ad because they worked together in a positive collaboration and people had the confidence to push through.

When brands invest in a co-creation partnership with consumers – for instance, last year’s Grand Prix- winning M&M’s 75th anniversary campaign – what do brands and agencies need to bear in mind?

They need to think about the value exchange and what their partners are getting out of it. If you’re asking a lot of people, what will they get in return? Give them the tools and make it simple. Make sure it’s a fun, rewarding and participatory experience that doesn’t rely on consumers loving your brand so much that they’ll do anything for you. The reality is people are busy and the vast majority of them won't go out of their way to create something for a big corporation.

We introduced the WARC Media Awards – and the Partnerships and Sponsorships category last year as a way of rewarding third party collaborations that have helped brands meet business goals. Feedback from last year’s judges on winning work was that it had to be original and leap beyond category norms. What, for you, makes a successful partnership or sponsorship?

I find the word ‘partnership’ is sometimes overused. A true partnership, where you get the best result, is where you can really align the business objectives of two organisations. Business objectives for media owners are of course to sell media, but where can you tap into something a bit deeper? Is there a vision that you can both communicate? Yes, the Olympics were about selling sponsorships but we also ran thousands of ground-up events that got people excited where to begin with no one cared and it was a genuine commitment to aligning on shared objectives. The healthiest partnerships are those that people want to repeat because they get the best value from them.

Content was a key theme of the judging last year in this category. How much will content partnerships be at the core of Diageo’s marketing activity in the future?

Content has been a phenomenal part of Diageo’s marketing history for decades. Digital makes it easy to reach people but you have to work harder to earn more of their attention. If you want people to spend more time with you, you have to spend more time on high quality content. Partnerships are a way of getting to that by working with people for whom great storytelling content is their bread & butter.

Tell us what you will be looking for in this year’s papers.

Ideally, I’d like people to make it clear to make what makes it impactful and not to bury it in the last line of a long response. I’d definitely like to see why it was effective and how it was effective and how it’s been measured. I want to see partnerships that have gone beyond a tag on sponsorship. I want to see what the core idea was and how can it work across different parts of the business.

What advice would you like to give to anyone entering the Partnerships & Sponsorships category in this year’s WARC Media Awards?

Judges are evaluating a lot of entries. You will know what’s really interesting and exciting about your entry, so communicate that to the judges. Don’t make it hard by hiding it – be proud about what’s unique about your work and put it near the top. 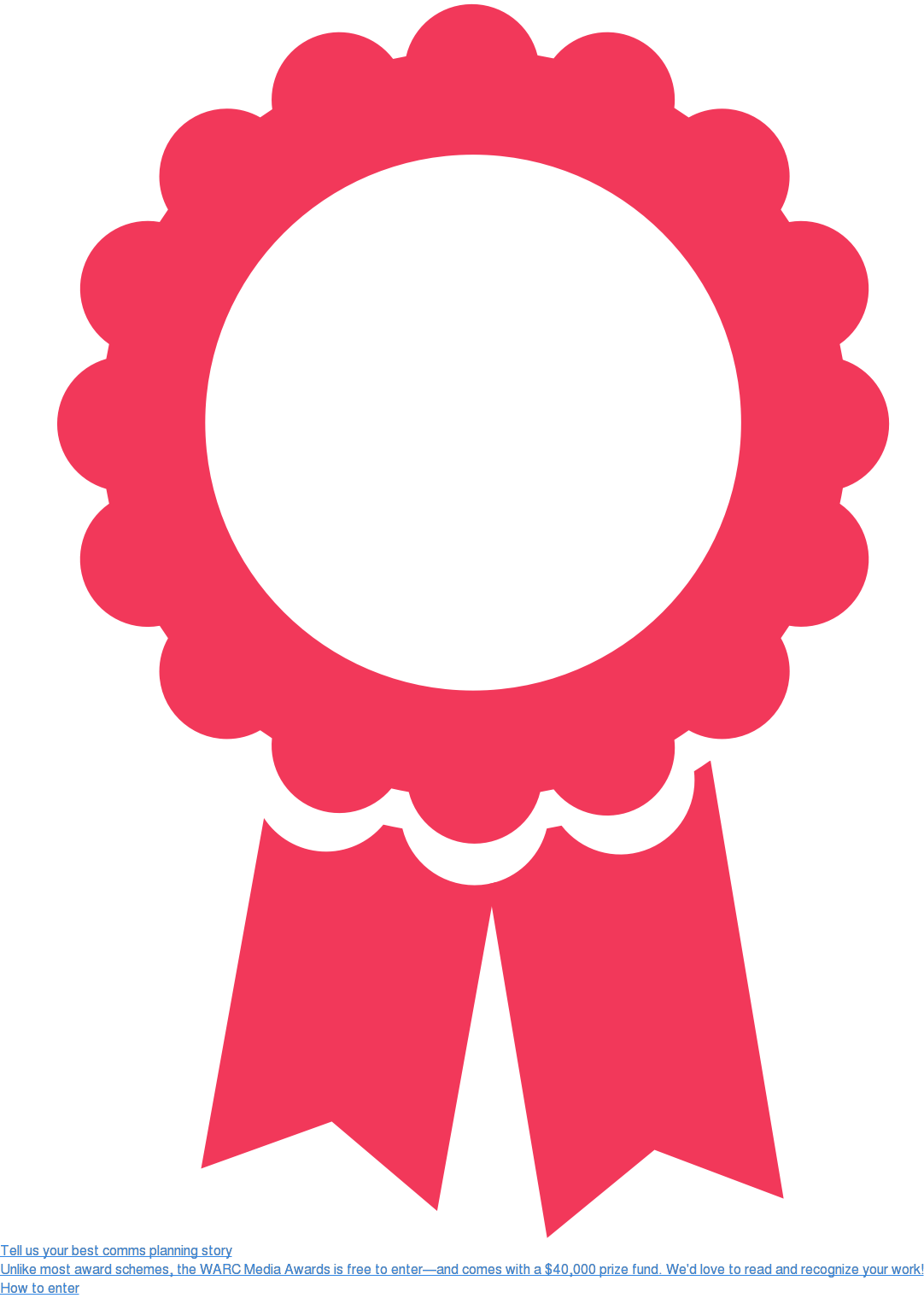