According to our 2022 Trust Barometer, released in January, the view of the technology sector’s ability to do what’s right stood at 72% globally. Wind forward to the October release of our Tech Sector Special Report, and trust is up four points to 76% across 15 of the 28 markets featured in the annual study.

But this does come after a 10-year decline where tech has lost its near-unanimous top spot as the most trusted sector. As of January, it remains number one in 11 of 22 countries, the vast majority of which were developing markets.

Interestingly, when asked what comes to mind when thinking about businesses in the tech sector, many people consider social media companies as tech companies. However, in western markets alone, people are 9.8 percent less likely to place their trust in a tech sector made up of social media brands.

Could this be one of those first world problems? Of the many findings in this critical report, here’s three that I believe point to a greater imperative for those who, like me, have big love for tech.

Whether it’s access to healthcare, availability of well-paid jobs or mitigating the consequences of climate change, there is a consensus that the tech sector offers hope to humanity.

As has often been the case, there is more tech optimism in developing markets. For example, in countries including one of the world’s most populous, China, there is much higher agreement that tech is a liberator in the workplace that frees people to do more meaningful work (80%) and enables more of them to find jobs (80%).

This global North-South divide is mirrored in what can only be described as trust of ‘foreign tech’. Here, a very polarised worldview sees developing markets with generally high levels of trust in foreign tech companies with quite the opposite sentiment from developed markets. As the chart below highlights, distrust of foreign governments, their data protection laws and concerns of seemingly nefarious use of data fuel these divisions.

Nonetheless, in workplaces across all sectors all over the world, from finance to education, most people (79%) agree that tech makes working life better. This hope will be critical at a time where people fear technologically driven automation will impact their lives and livelihoods by either taking jobs (51%) or driving up income inequality (60%).

2. ‘Vision that includes me’ most likely to drive acceptance of autonomous tech.

Tech businesses that create a vision of the future people can believe in are 13% more likely to increase acceptance of autonomous tech (e.g. self-driving cars). This call for big ideas is more important than these companies being simply being good at what they do or even, as effective agents of positive change, doing good (see chart below).

So, where do people feel excluded by the future? When it comes to trust in the emerging technologies that will shape what’s next, crypto currencies (41%) are the least trusted.

Again, deep distrust is far more present in developed markets, where people feel high growth innovation including Blockchain, Web 3, VR, AR and AI are not poised to do what is right.

As the chart below illustrates, to build trust, tech visionaries must highlight the tension between the benefits of new technology and its downsides. 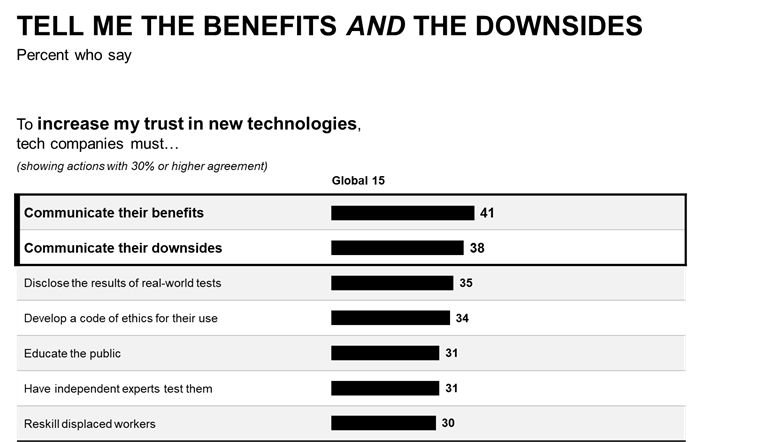 According to the data, this vision can’t just come from experts in the industry, or the tech firms themselves. Belief comes when people hear about it from their friends and family (63%) and then the IT experts in their workplace (62%).

To gain trust, the Tech sector must ‘get real’. Nonetheless, there is a worrying vision of how tech is damaging our sense of reality. Moreover, there has been a six-point rise (59 to 65%) in concerns that technology will make it impossible to know if what people are seeing or hearing is real.

With this deep fakery and the shock to our sense of identity comes a very real fear about cybersecurity and data privacy. But as the chart below illustrates, data security and privacy, alongside workforce treatment and diversity and societal impact are areas where tech firms just aren’t seen as performing strongly today.

In fact, in sharp contrast to belief in the good of tech, the sector is perceived as underperforming when it comes reducing its impact on climate change (41%) and ensuring suppliers have fair labour practices and protect the environment (40%).

For the greater good

The ask of the tech industry is to lead the world in solving the big societal challenges with a genuine vison of the future we can all believe in. A worthy task, and despite some very real concerns to address, well within the grasp of the global technology sector.

But for the good of tech, tensions between developed and developing countries need to be diffused. For the love of tech and to do what’s right, the sector must now come together for the greater good. 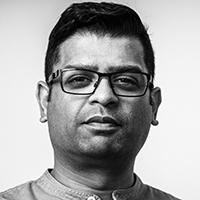