People play video games for all sorts of reasons. Some venture into gaming for the competitive nature while others are looking to escape into a virtual world to unwind. And now more than ever, people are looking for new ways to connect with friends and strangers alike.

Game developers have taken note, designing games that naturally facilitate social interactions, and players are taking to them like moths to flames. Developers are also transforming what video games offer by incorporating innovative ways to socialise within the game’s virtual environment. With socialisation features now part of video game DNA, gaming is positioning itself as a new kind of social network.

Take the multiplayer title Fortnite, for example. Epic, the studio behind the massive gaming hit, has created a number of in-game events that offer players a respite from playing yet happen within the game itself. Last year, DJ Marshmello hosted an EDM concert that drew some 10 million people. Players’ avatars hopped and bopped to tunes in a virtual world, mimicking a real-life performance. This year, Travis Scott partnered with Fortnite for a concert that drew an audience of 27.7 million.

As opposed to the traditional stereotype that gaming is solitary and antisocial, multiplayer games like Fortnite and game-creation platform Roblox – which allows consumers to programme and play games created by other users – are highly social environments that encourage collaboration, conversation and real-life connections that even transcend the gaming environment.

The sheer popularity of these events shows what Epic thinks is possible for games – that they can be versatile environments for playing and socialising. What people need to realise is that the virtual world doesn’t isolate people; instead, it gives players a new, diverse community to engage with.

The rise of e-sports, competitive video gaming, has also attracted plenty of players and high viewership numbers. E-sports has turned some gamers into celebrities and superstars, much like their NBA or popstar counterparts. In the same way that Lakers fans pack a stadium, gamers and non-gamers alike who enjoy competitive sports are tuning in to e-sports events in numbers that put the Superbowl to shame. In 2020, Super Bowl viewership clocked in at 99.9 million while in 2019, e-sports viewership reached 454 million, with projections topping 518 million for 2020.

When you combine the number of gamers, 2.7 billion, with e-sports fans and the 15 million people who watch daily on Twitch, a live streaming platform for players, you get a sizable, captive audience that’s hard to rival.

From a marketing and advertising perspective, this represents an enormous opportunity to connect with new audiences – one that’s much bigger than the current darlings of social media marketing, Facebook and Instagram, which have audiences of 1.73 billion and one billion respectively.

Video games offer the most creative opportunity for brands

Social media advertising has been a game-changer for brands. One of the most powerful aspects of running campaigns on social channels is the ability to target users with a high level of precision based on demographics and behaviours. The ability to track and measure campaign results enables advertisers to determine which campaigns are most effective and drive the best results.

Social media has also proven itself as an excellent way for brands to capture the attention of new, potential customers. For example, some 60% of Instagram users report discovering new products on the platform. Once discovered, social media becomes an easy way for brands to increase awareness and recognition, staying at the top of consumers’ minds by continually showing up in their feeds with ads.

Advertising inside games offers all the same advantages – targeting, measurement and increased brand awareness – plus additional and improved ones that make it even more appealing for marketers.

While ads on social platforms are limited to two-dimensional and simple graphic UX formats (photo, video and carousel), in-game ads allow creativity to shine without any constraints. Brands can opt to place ads on any in-game objects like cars, sports jerseys or billboards. They can flex their creative muscles and sponsor in-game items like skins, armour and weapons in Fortnite. If the wildly popular Animal Crossing: New Horizons aligns with a company, they could have branded clothing items for sale. Getty Museum even partnered with the game so players could add famous pieces of art to their virtual homes. The possibilities for brands are endless.

Along the lines of discovery, gaming also has its advantages over more traditional social platforms. On social media, people scroll through 300 feet of feed content per day, meaning many ads get passed over, especially as many users are checking feeds while doing other activities like watching TV. In-game ads, however, are highly immersive, often replicating the way ads appear in real life. Because gamers are hyper-focused on playing and there’s no second screen competing for their attention, the ads are taken in by the player with the same level of attentiveness that is required throughout the game.

Gaming: More than another social network

Every time the world is introduced to a new social network, advertisers can add the platform to their marketing strategy as an additional medium that helps them communicate with consumers. Each channel is slightly different in terms of user demographics and the creative opportunities it offers for advertisers. Brands that understand how to best utilize each outlet set themselves up for success and can achieve fantastic results.

Video games are no different. The format has transitioned itself into one that goes way beyond gameplay. It is now a social network with billions of daily active users who log in to play, yes, but also to connect and converse with friends and strangers. Like other social media platforms, advertisers can target users and share their messages inside games. What sets it apart is the amount of creative freedom advertisers have. For brands that use a multi-channel approach, adding in-game ads to their marketing mix provides another way to win over customers. 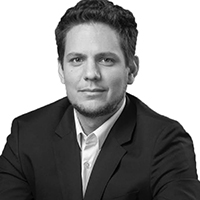 As CEO and Co-Founder at Anzu, Itamar Benedy leads an international team with the goal of transforming the advertising industry from the ground up. He formerly served as the CEO of Glispa, a Berlin-based advertising firm with €100M in annual revenues, a team of 250 people, and 9 international offices. He was also VP Marketing at Sport.com and Yoga.com. Itamar is a member of the Mobile Steering Group Board of IAB, and the Young President Organization (YPO). He was also nominated for Forbes Israel 30 under 30 in 2016.
Get a demo
Topics
Send feedback