This blog by Rebecca Newman, Research Executive at MEC, explained how, using Media Z, MEC examined the audience perceptions of the popular US drama series Game of Thrones and True Blood.

Game of Thrones is an American fantasy drama TV series, which is an adaptation of A Song of Ice and Fire by George Martin. The series explores the issues of social hierarchy, religion, loyalty, corruption, civil war, crime and punishment. It has built up quite a following within the UK drawing 1.45 million viewers during its most recenlty aired episode (12th May 2014, DDS). The hit show airs on Sky Atlantic and on Sky1 and is in its fourth season.

True Blood is also an American TV drama series, which is in its seventh and final season. It is based on The Southern Vampire Mysteries series of novels by Charlaine Harris, detailing the co-existence of vampires and humans in Bon Temps, a fictional town in Louisiana. The show is recognised for exploring issues such as the struggle for human rights, discrimination and violence against minorities, drug addiction and faith. It is aired on Fox which, although much lower than Game of Thrones viewership, enticed 78,000 viewers to watch the finale of season six (2nd December 2013, DDS).

Using MediaZ, the media brand health study from MEC; we can compare Game of Thrones with True Blood to gain insight into how consumers feel towards them; rating them from love, like, OK or not relevant. We can also determine a property's personality, as those that like or love the property are asked to select at least four characteristics that best describe it, as well as their views on brand involvement. Therefore, we can analyse the characteristics respondents associate with both TV programmes and see where any similarities or differences occur. 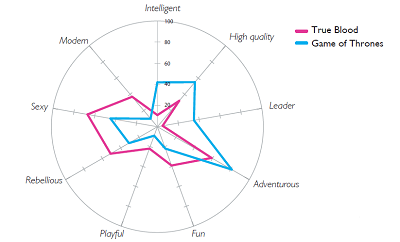 Brands associated with the programme and how they affected viewers' feelings towards the respective brand was measured. Twenty-two per cent of those that 'like' or 'love' Game of Thrones said they feel more positive towards a brand when it is associated with the programme; this is much lower for True Blood (11%). Game of Thrones scored above the UK average for all properties (15%). The likelihood to buy the associated brand was also recorded; respondents who 'liked' or 'loved' Game of Thrones were 21% more likely, while True Blood fans were only 7% more likely to buy the particular brand. The UK average for all media properties is 14%.

From looking at MediaZ, these TV programmes share some key characteristics, yet have managed to attract devoted fanbases and create strong identities.

Understanding who views these TV programmes and how they are perceived is important for advertisers and potential sponsors to target the correct demographic in the right way.