According to Luther Van Dross and Janet Jackson, the best things in life are free.

There's a lot of evidence out there to support this. A quick Google of 'free stuff' returns close to 50m results. You see for yourself – the dopamine hit from a free sample handed out at a tube station will make most of us deviate from our usual routine. As Professor Dan Ariely eloquently puts it in Predictably Irrational:

'Most transactions have an upside and a downside, but when something is free we forget the downside. Free gives us such an emotional charge that we perceive what is being offered as immensely more valuable than it really is.'

The two most powerful words in advertising are free and new. As much as we love free though, we are still sceptical of it. In the 1960s and 70s Robert Heinlein and Milton Friedman popularised the well-known phrase:

'There ain't no such thing as a free lunch'

Partly thanks to these chaps we are a cynical old bunch – as much as we love the idea of free, we're also suspicious of its value. When BT Sport launched their free proposition in 2013, we needed the reassuring words of Martin Lewis from Money Saving Expert to clarify our suspicions.

Those of you from the pre-Internet era will remember a time when you paid for ALL content. It was all you knew. Now we are bombarded with free physical and digital content. It has been well documented that the effect on the magazine and newspaper industry has been somewhat cataclysmic.

I recently had a conversation with a friend about his choice of reading online newspapers. He has moved from The Times, to The Telegraph, to The Guardian as each paper has introduced a charge for online content. Despite the fact that he is known to be the cheapest in our friendship group, what does this say about our broader attitude to choice and cost? Has the web-driven proliferation of content provided us with free alternatives? Do we have less available time and therefore struggle to justify the outlay? Or is there just something psychologically different about a digital purchase?

Regardless of the reasoning, there are some harsh realities for the publishing industry. This year we have seen job cuts at The Guardian and The Telegraph, and the closure of The Independent's print edition.

So have the publishers been able to do a Trump and reinvent themselves? Some UK news brands have had huge success in growing global traffic – their sites now attracting more than 40m daily visitors. The real challenge is turning this traffic into cold hard cash. The Daily Mail saw a 16% decline in print advertising (now £80m) but offset this with a 24% growth in advertising revenues at Mail Online (£44m). The Economist are certainly not hanging their hat on advertising.

Despite this success the bigger picture is worrying. There are two obvious revenue levers. Subscriptions and advertising. Since 2000 total daily sales of UK national newspapers have almost halved to less than 8m. Newspaper display advertising fell by 15% in 2015, the biggest fall since 2009. The Mail online has 3 times the traffic of The New York Times, but digital is still only 20% of revenue.

There is also an obvious human cost to this. These are real businesses having to let staff go. The current message on the Guardian website demonstrates how real this is. 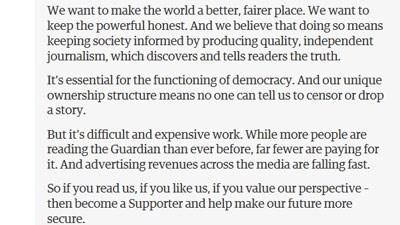 What about magazines? The magazine publishing industry is also in decline, with subscriptions falling 4% on average over the course of 2015. 40 out of 422 titles saw growth in this period. Magazine print advertising revenue is falling too (in a national market that grew 7.5% last year). At iris Concise we analysed data (since January 2014) from 65 UK magazine titles. Subscriptions are down 11% and revenue is down 7%.

Consumers are not to blame. If we can access the content we desire at little/no cost then we will. We shouldn't feel any guilt, but we should have the foresight to see the current trajectory and imagine a world with ever declining content and a weaker journalism industry. Much like a Trump dystopia, I am not sure that is something I want.

There's also an ever complicating landscape for how we access the content. We can seek it out (i.e. typing in The Telegraph URL) or we can have it served to us via aggregators, search engines or Social Media. Most of the 7.5% growth in advertising I mentioned before comes from Facebook and Google.

So what's the answer?

Any industry facing such drastic and systemic challenges is ripe for innovation. At iris Concise we work with over 300 UK magazine titles and have therefore had front row seats over the last 10 years. The thing about true innovation is that it must be disruptive. Disruption is usually associated with fear and uncertainty. The traditional newspaper industry is mostly pay as you go, the Internet has created a business model that is the opposite - mostly monthly recurring subscriptions (i.e. secure revenue). If each customer subscription is a bubble floating by, how does the content provider innovate by prodding the bubble without bursting it?

Maybe we are happy to pay for content of the right quality but we just need a new business model for our increasingly bitesize, transient lifestyles. Micropayments are interesting. Imagine paying 3p to read a well-researched article. Say you want to find out what Jeremy Clarkson thinks about a new car. If you have bothered to search for the article online, 3p to read it is probably a fair value exchange. Just imagine the cost behind that article. We all know from the Amazon deal that Jeremy isn't cheap.

From the perspective of The Telegraph you are the bubble. Right now they have a number of paying monthly subscribers. Let's imagine that's 1% of the UK. 99% do not pay anything to The Telegraph. The risk is that the bubble bursts and the introduction of micropayments has a substitutional effect, they still have 1% of the UK but the total revenue is lower. A net financial loss. However, there is also a big opportunity. The 1% remain and micropayments deliver a penetration into a new customer base (the 99%). A net financial gain.

There is no doubt that the publishing industry needs some radical thinking and content providers must take some risks. Perhaps it also needs consumers to meet half-way and recognise that there ain't no such thing as a free lunch?