Camilla Yates, Strategy Director at Elvis, the global creative communications agency, discusses recent work for Cadbury’s Creme Egg, and explains how the confectionery brand is making advertising as diverse as the people it serves, by featuring diverse talent in front of, and behind, the camera.

We used our 50th birthday, The Golden Goobilee, as an opportunity to create an inclusive ad that was truly reflective of our broad audience as we invited the whole nation to join in our celebrations by eating a Creme Egg any way they wanted! 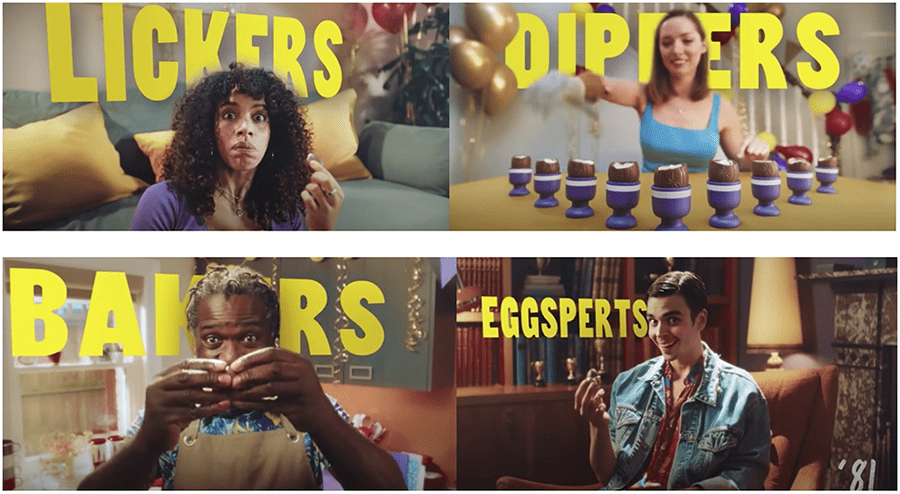 We’ve worked with the Creme Egg team at Mondelez for ten years, and we have grown brand sales every year since we have led the strategic and creative direction on the account. This means we are in the fortunate position of having clients who trust our approach, and who want to leverage the brand to push the boundaries of what is expected from mainstream confectionary marketing. The strength of our client-agency relationship paved the way for us to step boldly into a more progressive space with this year’s campaign.

Casting the net wide, we went in search of a genuinely diverse group of people who could add authenticity to our film’s playful vignettes. We kept the brief open across the roles as we looked for the best talent for each scene, regardless of age, gender or ethnicity, whilst consciously avoiding any pre-existing stereotypes.

But there were two roles where we chose to be more specific.

The first called for a real-life couple to share a Creme Egg. We chose to sidestep the antiquated expectations of a traditional family brand in search of a same sex couple to improve the representation of this often overlooked and underrepresented community within advertising. We were keen to cast a real-life couple for this rather than two unconnected ‘actors’, to ensure authenticity and genuinely reflect the community.

And for the second, we chose to cast someone with a physical disability to help normalize the conversation around this subject, letting their personality lead the concept for the scene.

Importantly, we also ensured we had diverse talent behind the camera, building a crew where 54% of the team identify as female and / or black, Asian, or minority ethnic. Including the traditionally male dominated roles of 1st Account Director, Focus Puller, & Grip.

While the talent in our ad was selected to represent real diversity (gender, age, ability, sexual orientation, racial and ethnic background) press and consumer interest zeroed in on the scene featuring a same sex couple (including over 2000+ comments on dailymail.co.uk and trending on Twitter).

We set out to be representative and inclusive, but we unintentionally kickstarted a global conversation which highlights how much progress still needs to be made. The reaction made us realise that we too still have a lot to learn.

Within Elvis and at Mondelez, our culture is one of Allyship. We recognise that we are all on a journey together, and the reaction to this ad showed that we needed to put new measures in place to support the talent in our creative, and ensure the most inclusive approach possible:

We have put a duty of care framework in place that considers a number of key areas, from logistical necessities like ensuring we have talent emergency details, to ensuring we’ve made talent aware of support available to them and understanding how comfortable they feel with any attention, along with allocating budget for media training and press requests

Engage with DEI communities/partners early on

While we consulted with members of the LGTBQ+ community during the creative development process, moving forward we will ensure that we leverage existing DEI partnerships and diverse research groups in order to engage them in the process and ensure our approach is being guided by members of the community.

Whilst we were clear about not tolerating hateful language on our brand social pages, the LGBTQ+ community helped massively in regulating negativity around the ad.

Moving forward, we are updating our pre-emptive response management process across owned and non-owned social channels, reviewing standard channel practice, agreeing principles around when and when not to use official statements, and when to engage in order to facilitate safe spaces.

For all campaigns we now perform a pre-flight evaluation of all scenarios, all talent, all partnerships, time of year live and links to previous negative press. Understanding how content could be viewed from the perspectives of diverse communities is a highly important input into scenario planning.

The level of attention that one specific scene attracted shows just how much progress still needs to be made. The ASA received a petition against the ad signed by 30,000 people, and over 40 complaints about the gay kiss specifically (The body ruled that the ad is not breaking any rules, and so can remain on air).

However, the ad has also seen significant levels of positive PR, with influential platforms such as Attitude magazine and Gay Times supporting the approach, a Change.org petition called DO NOT CANCEL The Cadbury's Creme Egg Advert With Two Men Kissing – In Fact Amplify It! has attracted almost 50k signatures. and the ad has also recently been nominated at the British LGBT Awards.

While the campaign did successfully grow the brand’s equity and sales, we didn’t take this approach for commercial reasons. we took it because we believe in the power of representation to contribute to a more inclusive society. And the fact that the ad resulted in petitions to boycott the Creme Egg brand show what a long way we still have to go. That said, we’re very happy to report that embracing true diversity has generated strong ROI for Britain’s biggest Easter brand. 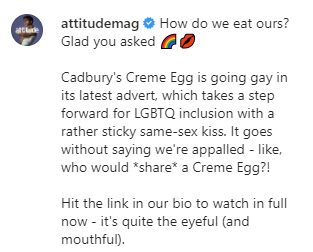 The learnings we have gathered from this campaign are already being leveraged across other brands’ campaigns within Mondelez’ portfolio, and the conversation around this ad has accelerated conversations within internal affinity groups and more broadly within the industry. Our aim is to represent our broad and diverse audiences as authentically as possible within our creative, which means we will continue to push to feature more diversity in future work. We hope that ads like this one inspire conversations in all brand marketing teams that help to make advertising as diverse as the people it serves.

As Raphael Capitani, Brand Manager Cadbury Creme Egg put it,“for the 50th birthday of a beloved British favourite, we wanted to create a season-long birthday celebration for the nation. We are proud of our Golden Goobilee advert which celebrates the many ways that everyone can enjoy a Cadbury Creme Egg.” 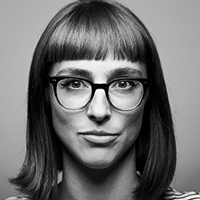 Strategy Director at Elvis.
Get a demo
Topics
Send feedback