On 5 March 2014, it was announced that BBC Three would cease broadcasting on Freeview and satellite and become available online only. This is due to £100 million-worth of cuts at the corporation. This caused backlash from some viewers and a petition was set up to try to save the channel. There were 97,381 tweets (Sysomos) including the hashtag #SaveBBC3 within eight days of the announcement, signalling huge support for the campaign. BBC Three aims its content at a younger audience, those in the 16-34 year-old age group, focusing on new talent and new technologies.

Over 15 million people watched BBC Three in the week 24 February to 2 March 2014, according to BARB. BBC Three offers drama, comedies, spin-off series and repeated episodes of BBC1 and BBC2 programmes. Some well-known programmes that started life on BBC Three include Little Britain, which due to its popularity moved to BBC2, and later, BBC1. The same thing happened for comedy show Gavin & Stacey. BBC Three has demonstrated its prowess in commissioning cutting-edge TV shows, which build up a huge following and are moved to more prominent BBC channels.

ITV2 is a huge competitor to BBC Three, airing all day and available via satellite and Freeview platforms. It is recognised for its American imports such as Gossip Girl and The Vampire Diaries, repeats of recently aired episodes of soaps and other entertainment programmes from ITV such as Coronation Street, Celebrity Juice and The Only Way is Essex. It also airs spin-off shows such as I'm a Celebrity…Get Me Out of Here! Now! and The Xtra Factor.

Using MediaZ, the media brand health study from MEC, we can compare BBC Three to ITV2 to gain insight into how consumers feel towards them; rating them from love, like, ok, or not relevant. We can also determine a property's personality as those that like or love the property are asked to select at least four characteristics that best describe it. Therefore, we can analyse the characteristics respondents associate with both channels and see where any similarities or differences occur.

Forty-three per cent of people 'love' or 'like' ITV2 compared to a slightly less 36% for BBC Three; this may be due to ITV2 being launched in 1998 whereas BBC Three wasn't officially launched until 2003, therefore viewers may be more comfortable with ITV2. 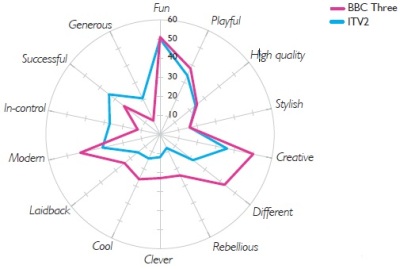 From looking at MediaZ, these television channels share some key characteristics, yet have managed to create different and strong identities. Although they attract the same audience, this evidently varies due to what is being aired with each channel offering the viewer something unique to the other. BBC Three is driven by upcoming talent and broadcasting original shows, whereas ITV2 is more focused on identifying popular shows in the US and bringing them to the UK. ITV2 follows the trend whereas BBC Three aims to set the trend.