Many would agree that the Cannes Lions International Festival of Creativity is a great excuse for an industry-wide party. But idealists might add that the fact marketing people gather each year at the end of June in a seaside town in the South of France represents a tribute to a timeless human trait: creativity. Isn't creativity, after all, the ultimate force behind a great ad - work that has a positive impact on the client's bottom line, and might even win a Lion or two?

It was creativity - as a concept, a value, and, more grandly, as an essential component of the well-lived life - that was the subject of today's well-received Cannes presentation from cultural guru and confirmed idealist Sir Ken Robinson. The speech falls on a special anniversary: the 100th birthday of the most famous ad man of them all, David Ogilvy. And it was clear that Ogilvy's example inspired and informed Sir Ken's words, much as this enormous billboard of a sharp-suited Ogilvy dominates views of the Palais today. 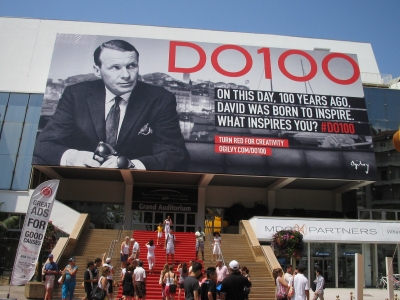 The birthday boy didn't see creativity as a tool for selling products, Sir Ken argued. Instead, it represented "a force for good". Ogilvy was both "an icon of creativity and an example of it". (To learn more, take a look at a website O&M, the agency started by the man himself, put together to mark the anniversary.)

Going further, to Sir Ken exercising creativity in daily life is the "only response" to a profoundly changing world in which 10% of the human beings that have ever been alive are alive today, and in which we are "not evolving as fast spiritually as we are technologically". Creativity is also the key assertion of our humanity. Using creativity is "like gardening": nurturing something to make it grow. Individual creativity is the best leadership technique you can develop; after all, the typical organisation functions much more like an organism than a mechanism. More broadly, creative solutions - an embrace of the organic over the mechanistic - represent our best hope of creating a sustainable future in a warming and ever-more-populated world.

But as a more down-to-earth supplement to these huge claims, Sir Ken gave his personal definition of creativity that any employee can use. It's "the process of creating original ideas to add value".

And it goes without saying that you need to be doing something you love in order to be truly creative. Sir Ken underlined this last point by quoting a bit of advice from 19th century author (and idealist) Henry David Thoreau: "Live as close as possible to the stream in which your life flows."