The ninth iteration of Brainy Bar, hosted by Walnut Unlimited and WARC, featured an all-female cast of speakers providing advice and expertise on the ways in which neuro is leading changes in branding, communications and research. Lona Meza was there to hear.

The three themes for the evening, introduced by Dr Cristina de Balanzo, Director at Walnut Unlimited, included Artificial Intelligence (AI), easing the customer journey and the use of the senses in marketing. But all, she noted, were ultimately about “demonstrating the importance of brand experience and how to enhance it”.

AI is going to be bigger than neuro, according to the first speaker, Elissa Moses, CEO of BrainGroup, “because of its applications in so many aspects of our lives”.

As an early advocate for the neuro-measurement of ads, she has seen it move from a method only used “if you really had a naughty problem, or you had a little extra budget”, to good practice “to include both conscious and non-conscious measurement in everything you do”.

Similarly, AI is on its own journey from a tool used by strategists to analyse data, to having the potential to help create award-winning campaigns – although Moses also stressed that anything AI produces is only ever going to be as good as the data it has to work with.

In news that will unsettle creatives that thought their jobs were safe from robots, there have already been experiments on AI’s ability to create – AI created 1 the Road which was described as having “some striking and memorable lines”.

Though the idea of creativity coming from a machine seems oxymoronic, the reality is that a lot of human creative output can be formulaic – as many Hollywood movies already prove.

Moses argued that this same logic can be applied to the science of creating a “good” ad. If the right datasets are fed to AI there is the potential for it to spit out some good ads.

Researchers at Oxford University “found out that all of us put our clients through pain”, observed Dr. Ana Iorga, the founder of Buyer Brain. These painful moments will be familiar: in call centres when callers must repeat their stories over and over again; when people search for a product and it can’t be found; or when an e-commerce store malfunctions and would-be consumers are forced to repeat the purchase process.

In other words, when we are forced to put in a bit of effort, our brains react as if we are going through physical pain. Businesses are spending a lot of money in an effort to reduce or eliminate such pain points, but they’re still not getting it right – and it’s a huge business opportunity.

In Amazon’s 20th annual shareholder letter, Jeff Bezos stated that customers are “divinely discontent. Their expectations are never static – they go up. It’s human nature.” Naturally we are always looking for quicker, easier and better ways to do things, and we support the companies that make our lives easier.

Iorga argued that there is a huge gulf between what some companies are proposing is a positive customer experience, versus what consumers actually feel is a positive experience.

The reasons for this disparity, she suggested, are because:

• companies don’t have a good map of what customers want;

• customers are not loyal;

• we are wired to avoid pain.

Likewise, you can’t always trust what customers say, whether it is positive or negative. Traditional research methods can be used to identify physical strain; people can easily acknowledge and admit to their dissatisfaction at waiting for too long in a queue. However, neuro is needed to understand a consumer’s emotional and cognitive effort. You don’t often find people ready to admit that they didn’t understand an offering, or even how they felt about an experience; unless it was particularly good or particularly bad, most consumers will respond with indifference.

For companies that do address customer pain points, you get innovative experiences that streamline existing processes. Uber, Amazon and Airbnb are examples of companies that have changed the standard of what is expected.

The science of sensory marketing

In a recent study, Mood Media and Walnut wanted to test consumers for their cognitive, behavioural, and emotional responses to sensorial marketing in a retail environment to see what impact this would have on the bottom line.

The test covered four of the five senses – sight, sound, touch and smell being most relevant to a clothing brand – with the emotional impact measured via galvanic skin response (which monitors changes in sweat gland activity to assess the intensity of the wearer’s emotional state) and eye tracking cameras worn by the shoppers to enable researchers to view their line of sight.

Valentina Candeloro, marketing director at Mood Media, and Amy Nichols, research director at Walnut Unlimited, reported how they were able to quantify the emotional effects. For example, shoppers became 28% more emotionally elevated when the scent of freshly cut grass was added to an area of the store selling football-related items. (You can read more details here: How sensorial marketing drives in-store sales.)

An unexpected finding was that consumers love seeing themselves in stores. A video showed a consumer trying on a cap, and after seeing himself in the mirror “he gets by far the absolute biggest spike in emotional intensity… of his entire shopping trip”, Nichols reported. It’s an element of the in-store shopping experience that most stores will already provide but are perhaps underutilising. Nichols calls it “the science of narcissism”.

But the biggest takeaway for marketers is that customers stayed longer in store when sensorial marketing was used, and, crucially, sales went up 10%. 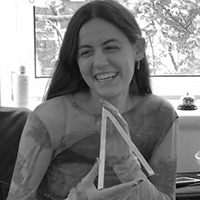