What follows is an excerpt (and slight expansion) from a section of a talk I gave at the inaugral Google 'Firestarters' event in Melbourne last week.

The theme was 'Adaptive Strategy for an Adaptive Age'.

In this particular section of the talk I speculated around some of the external cultural factors that have implications for strategy (rather than discussing specifics of strategy or process and the like).

To illustrate I called upon two important texts in particular plus a snippet of a recent interview in the Observer with Don Letts – legendary DJ, film-maker, Rasta punk and musician with Big Audio Dynamite – and the significance of the performance given by KLF at the Brits in 1992.

The first text was 'Subculture' by sociologist Dick Hebdige, a study of UK youth subcultures from the 50's to late 70's (a fantastic academic book, fairly unique among academic writing in that it is actually readable for mere mortals).

Hebdige describes the two principle methods by which every counter-culture idea of any significance is later incorporated or co-opted by the establishment.

He calls these the commodity form and the ideological form.

In the commodity form the establishment attempts to transform the 'other' into meaningless 'exotica'.

This is done by taking the style, trends, dress, music etc of the subcultures and popularising them so that the subcultures lose their exclusivity and gradually become mass-produced commodities made available to all.

Or, secondly the 'other' is trivialised. What was 'otherness' is reduced to 'sameness'.

This incorporation minimises the 'otherness' and then ultimately defines the subculture in exactly the terms that it originally sought to resist in the first place. So, as soon as the innovations that signified a subculture are translated into commodities and become everyday they lose meaning, i.e. what were subcultural 'signs' become mass-produced stuff.

What begins as symbolic challenges ends up becoming the new conventions.

For instance, the music of the Sex Pistols was played to the Queen, as an enduring symbol of Britishness, at the opening ceremony of the London Olympics in 2012.

For a long time, as I fancied myself as a sort of left-wing pseudo sociology professor and agitator type, this point of view made perfect sense.

So if a subculture could somehow resist incorporation and not 'sell-out' it could prevail, values intact.

However, approaching the problem from another angle reveals a somewhat different possibility.

What if there is/was no subculture?

What if mainstream culture and counter-culture were simply two sides of the same coin?

What if consumer capitalism was not about conformity at all, but actually depended upon rebellion and counter-culture absolutely in order to generate the next wave of rebel product for integration into the mainstream?

This is the argument put forward by Heath and Potter in our second text 'The Rebel Sell – How the Counter Culture Became Consumer Culture'.

That much of consumption is not about conformity – but distinction.

Cultural products that are purchased to display that we are smarter, cooler, more 'authentic' than others, generate competitive consumption.

Heath and Potter further argue that the cycle perpetuates itself because once the early adopters see too many people jumping on the latest counter-cultural bandwagon, they get off and move onto something else.

The irony being that "anti-consumerist" consumers are actually the most brand conscious.

Don Letts makes a point in his Observer article: ideologically he appears to be coming from the Hebdige point of view – lamenting the decline and slow death of the counter-culture from the rebel standpoint.

However what he also describes is the adaptation facing consumer capitalism. When there is no longer any significant counter culture from which to draw the next wave of cultural consumer products, then they begin to emerge from somewhere else altogether.

'These days, people get into music to be part of the establishment. The most f**k-you guy around is Justin Bieber. What does that mean? There's no counter culture – only over-the-counter culture.'

Selling out is now no longer something that needs to be post-rationalised to stave off cognitive dissonance in rebellious youth.

Selling-out is the objective, right from the get-go!

For Gen Xers this is a hard one to swallow.

Not so for millennials, rebellion has never been part of their culture – their only culture has been a marketing culture.

Later I argued that the real genius of Uber is nothing to do with technology or even (dubious) business practices.

The genius of Uber is in turning a commodity (consumption) product – the Taxi – into a display (status) product and spinning its anti-unionisation, anti-regulation winner-takes-all form of ultra-capitalism as some sort of signal of non-conformity and rebellion.

Now we know what's going on, is it possible to map the disruption over time?

Possibly. This is purely a thought experiment – an 'acausal connecting principle' – e.g. a sequence of events that cannot be fully explained by simple cause and effect, but something may be behind these events, even if we don't know what.

I've joked in the past that the millennials are unique in post-war youth culture in one respect at least.

They are the first generation that was unable to come up with any kind of counter-culture idea that their parents would be afraid of. Sorry hipsters.

1980 was the year that millennials started being born, and therefore started to enter their teens around 1993 – the year that the internet began to be adopted and began its ten year march towards critical mass. 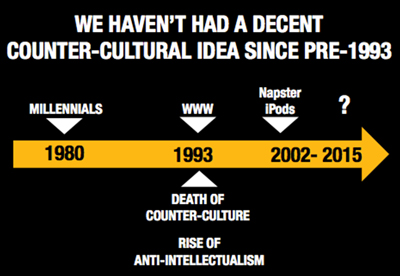 The previous year the KLF appeared on the televised Brit awards show, to perform and collect the award for 'Best Act'.

In a final futile act of defiance Drummond and Cauty appeared on stage backed by Extreme Noise Terror (thrash metallists) and performed a barely recognizable thrash noise rendition of their biggest hit '3am Eternal' before Drummond sprayed the audience (the music business itself) with (blank) bullets from a machine gun and announcing 'The KLF have left the music business'.

In The KLF:Chaos, Magic and the Band who Burned a Million Pounds by John Higgs the author offers this:

'In a strange way, something about the music industry did die around that point. Music in the twentieth century had shown an incredible ability for invention. New musical genres were constantly created and explored – so much so, in fact, that this was considered normal. The first half of the century had given us such distinctive new genres as blues or jazz. The Fifties gave us rock 'n' roll, and the Sixties gave us psychedelia and soul. The Seventies gave us reggae, heavy metal, disco and punk, and the Eighties had delivered hip-hop, techno, acid house and indie. The assumption was that this level of creativity was normal and would continue indefinitely…. It would never have occurred to anyone in those seats, as Drummond fired blanks into the ranks of their peers, that this period of invention had come to an end'.

The final nail in the coffin for the counter-culture – given that pop music of some shape or form has always been central to these movements – can then probably (and not without some significant irony), be traced to sometime around the turn of the century with the advent of the iPod, file sharing and streaming music services such as Spotify.

Is it that the emergence of devices and services that at first look appeared to democratise the music industry, shifting the power structure and giving us access to all music, all for free was an incorporation or co-optation too far?

Music began to lose its signalling and galvanising power because it became an individualised 'pleasure' commodity product consumed (for free) by individuals in private within their earbuds.

That's if the individuals could even make it through the 3 minutes without pressing skip.

The well was now dry.

Our relationship with music had now changed forever – seemingly overnight, though it had been incrementally creeping up on us for 10 years and we hadn't noticed.

I've no idea, but the adaptive challenge for strategy needs to take this on board.

Or since the millennials dropped the ball, maybe Gen Z can come up with something.