Samsung Galaxy is the brand that achieved the biggest rise in Ad Awareness in the US during March.

At the start of the month, Samsung Galaxy’s Ad Awareness score (whether someone has seen or heard an advert broadcast by a company in the past two weeks) was 17%. By the end of the month, the metric had risen to 23%, making it the biggest gainer among the 1,600+ brands YouGov tracks.

This should come as no surprise to technology enthusiasts; the company has reached a milestone with the release of the Galaxy S10+ smartphone on March 8. The brand also released a new campaign that celebrates the 10-year anniversary of the Galaxy line. “The Future”, Samsung’s recent advertising campaign that launched in February, commemorates the smartphone’s legacy not with a retrospective, but with forward-looking ambition. 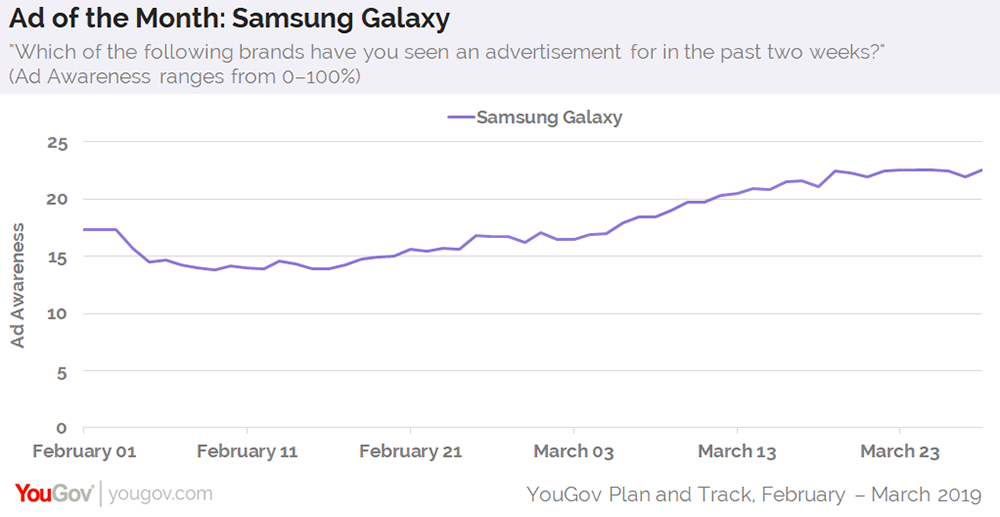 The video titillates viewers with an aspirational vision of technological development in emerging fields — such as artificial intelligence and virtual reality — by demonstrating the numerous ways it will reshape how we connect, work, and relax.

Toward the end of March, Samsung partnered with NBCUniversal to film one episode of “The Tonight Show Starring Jimmy Fallon” entirely with the Samsung Galaxy S10+. During the show, Fallon travelled across New York instead of remaining in the studio, highlighting the smartphone’s ultra wide lens. The episode aired on March 25.

The popularity of Samsung’s campaign comes after a decade marked by technological prowess and weathering crises. In the latter half of 2016, following the Galaxy S7’s battery scandal, the brand’s Buzz score (a net measure of whether consumers have heard anything positive or negative about the brand in the last fortnight) decreased from +15 to -12 on a scale ranging from +100 to -100 in a moment that led numerous pundits to cast doubt on Samsung’s longevity. The Korean electronics giant has proved remarkably resilient.