The latest campaign by Specsavers, the UK optician, shows how playing with brand codes can be used for short-term activations as well as long-term brand-building, says Simon Harwood, Head of Strategy at the7stars.

I witnessed a rare phenomenon recently.

The fully integrated campaign. One idea at the heart of it, executed in multiple ways across multiple channels. Where the seam between creative and media was indistinguishable. Integration way beyond ‘matching luggage’, with specific, complementary roles for channels that built and enhanced my understanding. That made clever use of context and environment. That was unashamedly populist (in the non-political sense of the word).

What was even better was I witnessed this event as a consumer (albeit one far more likely to notice advertising in the first place). I didn’t just read about it in the trade press. I saw it In Real Life. Everywhere. On posters, on social media, on the radio, on the telly.

I’m talking of course about the brilliant Specsavers campaign which has brought one of the most enduring brand ideas to life in so many ways.

The first thing I saw this brilliant outdoor stunt, which harnessed social media to amplify a single shot of a poster gone spectacularly wrong to earn attention. 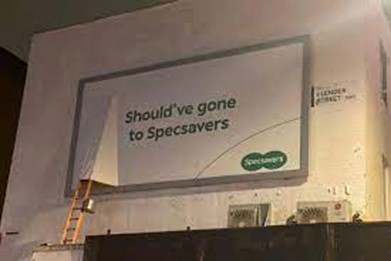 We’ve seen this playbook in action before with the likes of Marmite’s exploding billboard for their Dynamite launch.

The next day I saw a promoted tweet of a real person’s ‘should’ve gone to Specsavers moment’ involving a wrong conclusion about a positive lateral flow test.

The next day, another poster but this time IRL, on the platform at Waterloo, featuring mismatched copy. Followed by upside-down ads in the Metro. 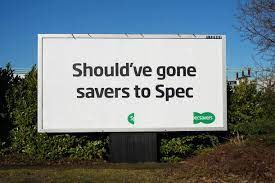 Outdoor remains one of the few remaining broadcast channels and as such arguably works harder than any other in service of the integrated campaign. The very public nature of outdoor makes it great at creating shared meaning. I hope it avoids undermining its own strengths through the lure of ‘programmatic’ targeting. But that’s one for another day.

Then the ITV and Channel 4 continuity announcers started ‘accidently’ announcing each other’s shows. An idea that is brilliantly simple to experience but would have required some strong collaboration and effort behind the scenes, and made all the stronger through the willingness of ITV and Channel 4 to allow their own assets to be integrated into the execution. 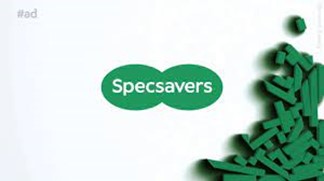 Mark Ritson has highlighted the benefits of brands having fun with their established brand codes, whether it be the logo, the colourways or the distinctive shape of the product. When you have successfully created something familiar in the mind of the public, you can get noticed even more by re-mixing and playing with the distinctive assets.

Specsavers are in the envious position of having a set of codes that absolutely demand to be played with. In fact, the brand idea itself depends upon it. Which is why you can spot a Specsavers ad a mile away.

What allows them to do this is not only the equity of a brilliant brand idea cemented in the minds of the public over two decades, but the simplicity and tightness of the idea itself. It is this quality that sets it free and allows it to live in new and interesting executions. All the benefits of a consistent brand device that never gets dull.

Not only did this campaign remix the brand codes beautifully to showcase the familiar in a new light, but it clearly was fun to plan and respected the intelligence of the audience to join the dots of meaning.

A sense of fun is sorely needed if we are to deliver ideas that get attention with people who quite rightly don’t take advertising too seriously. It also helps with the task of getting media and creative to work together in service of the brand idea as central to the integrated campaign.

The Specsavers work reminds me of another fantastically integrated brand idea, ‘You’re not you when you’re hungry’ by Snickers. YNYWYH was a consistent yet expansive platform that ran for years and was interpreted in all kinds of attention-grabbing ways by different markets across the world since its debut in the 2010 Super Bowl.

In the UK, the blokey, everyman Dave channel became the posh and pretentious “Rupert” featuring a new programming schedule, including art appraisal show Private Collections, the International Chess Championship, and fictional arthouse cinema classic Ni Pour L’amour Ou L’argent. While in Australia, a ‘Hungerithm’ aligned the price of a Snickers to the levels of anger on social media, showing that consistent brand devices can be used for short-term activations as well as long-term brand-building.

It must be karma, but I lost my glasses on a rare old knees up a couple of weeks ago. I’ve been meaning to book an eye test for months as I’m squinting at any presentation delivered more than six feet away. Still, inertia (read laziness) is a strong counter force to any action.

Specsavers have created a piece of comms that not only ensures they are among the first options I think of for an eye test but also acts as the trigger for action (or ‘category entry point’, if you prefer). Lots of people need an eye test at any given moment and I bet this has provided a neat little motivational nudge to millions, delivered in a fun way without making them feel bad about it.

If integration has fallen down the advertising agenda, perhaps due to the pressure to chase the latest shiny thing or industry buzzword, this campaign acts a timely reminder of its enduring power.

You can’t persuade unless you’re on the radar in the first place. A familiar idea refreshed in new ways is a great way to remind people that the brand exists and is ready for them whenever they are. 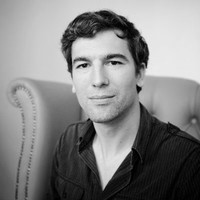 Simon Harwood is Head of Strategy at the7stars.
Get a demo
Topics
Send feedback