If you look online for the term 'MailKimp', you'll be let in on one of the web's current in-jokes. The word is a mispronunciation of the email marketing company MailChimp. It cropped up in one of the ads in the smash hit podcast Serial last year.

The first season of the Serial podcast investigates the story of an old murder. It's told through a mixture of interviews and commentary. So when the show's producer, Dana Chivvis, made the MailChimp ad for the show, she created it in their interview style. It was when approaching people on the streets of New York to talk about MailChimp that comedy gold was born. One interviewee didn't know how to pronounce chimp and flubs it as "Kimp? Keemp? Qimp?" It was one of those random moments in internet culture that has gone viral. Spawning memes, parodies and articles (like this one). And it almost didn't happen.

"When the episode aired, that was the first time we had heard the ads – so the girl who can't pronounce [Chimp] was totally spontaneous," MailChimp's marketing director, Mark DiCristina, told Adweek.

Do you think he would've approved the soundbite if he had? I shouldn't second guess. But a mispronunciation of the brand name would make any marketing director pause. Especially when your brand name is wacky enough already. But it's the kind of subtle decision an editorial team instinctively knows will make good content. Something that will appeal to their audience and maybe even enhance the main content.

For a generation that skipped radio, podcasts are a reintroduction to the wonders of oral reporting and storytelling. But the ads popping up in them? They're also a new style of advertising we have to get to grips with.

If the presenter of a show reads out an ad, is it native advertising? Or an endorsement? Should the new breed of podcast presenters copy the style of the golden era of radio and be reading ads at all?

The endorsement question was recently debated – on a podcast, of course – by podcast network founder Alex Blumberg of Gimlet Media. His team sat down to discuss a Microsoft ad they'd recently aired on their show StartUp. In an ad for the Outlook mobile app, Blumberg casually mentions co-founder Matt Lieber uses it. This, argued other Gimlet presenters, crossed the line into an endorsement. Something that journalists shouldn't be meddling in. Blumberg agreed. They updated their ever-evolving guidelines for creating Gimlet Media ads. But not without attracting the scrutiny of The New York Times first.

I say 'ever evolving' because it's not the first time Gimlet Media has been in hot water over one of its ads. Last year, it received a lot of flak from a mother whose young son featured in an ad. Through a series of mistakes, she wasn't informed his slot was an ad interview (like the MailChimp ones), rather than an interview for the show. Gimlet apologised, updated their guidelines, and broadcast the whole thing for us to hear.

Bravo. It's easy for old media, like The New York Times, to wag a finger at new media companies such as Gimlet. But commercial podcast marketing has recently exploded. A new media landscape is forming. And unfortunately the pioneers will have to make a few mistakes while blazing a trail for others to follow.

Podcast radio is also a tricky medium for native advertising. Visually we can take in dozens of signals that something is a paid promotion. But aurally it's difficult to distinguish an ad from the show content. Gimlet solved how to signal their ad segments a while back. They use a set piece of music as the intro and outro to any ad across any of the shows in their network. Basically they've trained us listeners to receive a subtle cue when an ad is starting or finishing. And the ad still feels right within the context of the show. It's much more elegant than the interruption between TV shows and TV advertising.

As a heavy podcast listener, I'm actually enjoying the ads that shows are creating. And I'm a lot more engaged and influenced by them than other, more traditional, forms of advertising. Maybe that's the novelty factor. But I believe these ads are better because they're being created by 'real' creators, not marketing creatives.

People from editorial can spot what most marketers would think was a mistake and turn it into something captivating about the brand. That little monkey might just be showing us a new way to make advertising. 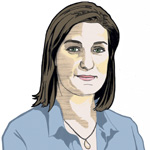