The IAB study, carried out with professional services firm PricewaterhouseCoopers, was the first such report designed to measure not just traditional online display advertising but also the full range of online spend including sales commissions, management fees and so forth. Its primary objective was to give a highly accurate picture of internet ad spend.

In order to do so the IAB used a survey methodology that defined ‘online performance marketing’ defined as affiliate marketing, e.g. where the ad publisher is paid for a user action, such as a completed purchase; and lead generation, e.g. advertising where the publisher is paid per enquiry or interaction.

Speaking at the event, Tim Elkington, director of research and strategy at IAB UK, noted that the internet advertising market is highly fragmented, with a wide range of agencies, affiliates, advertisers and publishers acting in roles that often overlap. Therefore the IAB study incorporates 27 survey responses from 23 companies as well as the results of 31 interviews with advertisers, publishers, agencies and survey respondents.

According to this research, in 2012 three to four thousand UK advertisers spent £814m across approximately 10,000 publisher websites. Of this total, 86% was devoted to affiliate marketing, the remaining 14% to lead generation (which, noted Elkington, tends to concentrate on big-ticket items such as cars, household appliances and other such items).

This investment results in over 100m transactions, such as online purchase, and a further 70m responses, e.g. completed queries or forms. Averaged across the UK adult population this means there is an average of two purchases and one-point-five responses per person per year. Which, according to Elkington, generates £9bn in sales; £8bn of which are due to affiliate advertising and £1bn arising from lead generation activities. 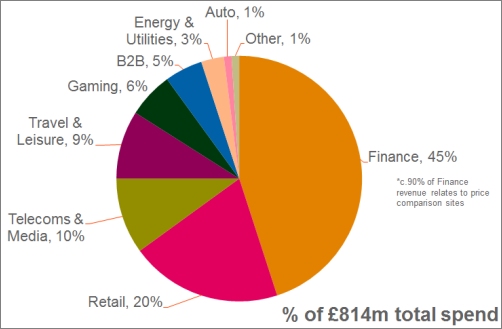 Not surprisingly, online performance marketing spend is weighted heavily to certain sectors. Financial services take up 45% of the £814m outlay, followed by retail with 20%, while travel and telecoms and media make up the remaining larger segments with a 10% slice each.

Revenue, however, is dominated by retail, which accounts for over 70% of online sales volume and just over 50% of sales value. Travel, by contrast, accounts for less than 10% of total volume but adds up to 25% share of the value sales; while finance hovers around 5% volume but contributes over 10% in value. In terms of channels, affiliate revenues draw from the growing number of comparison websites, loyalty schemes and coupon sites, with these accounting for over 60% of total revenue.

Overall, Elkington argued, the reported spend versus claimed revenues led the IAB to calculate an industry-wide marketing return on investment of 1:11 – with every one pound spent for online performance marketing resulting in £11 in sales. He also highlighted the rapid growth of the market, claiming that it has boomed by 57% since 2008, an average of 12% growth per year.

He also noted that, in light of the ongoing economic troubles, these are very strong figures, and that they should provide a boost for advertisers and agencies in the online space. In keeping with this optimism, online performance marketing suppliers expect their revenue to grow by an average of 25% in 2013.

There are major opportunities in this sector, in other words.

Cila Warncke is a Summaries Writer at Warc.
Get a demo
Topics
Send feedback