Warc's US editor, Geoffrey Precourt, reports on Nancy Hill's opening address to the 4A's annual conference. Coverage of the full sessions will be published shortly on Warc's Conference Reports page.

"I like bellwethers," Nancy Hill, President/CEO of the 4A's (formerly known as the American Association of Advertising Agencies), told an audience of 1,000-plus in her opening address to the organization's Transformation 2011 conference in Austin, Texas.

"I am very excited to be the bearer of positive news this year. Not 'there's-light-at-the-end-of-the-tunnel' prognostications, but hardcore, positive 'yes-our-industry-has survived-and-is-robust' news." 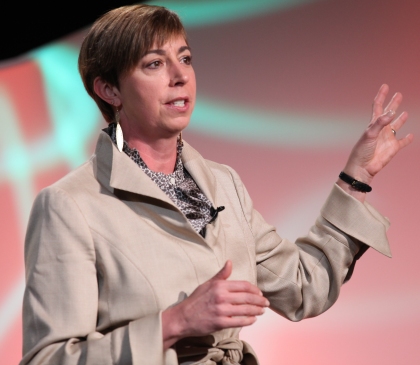 Just two years ago, at the 4A's annual meeting in San Francisco, Hill cautioned about the impropriety of "going around and crying on each other's shoulders for how bad times are".

In 2011, "Everywhere there are reports of clients boosting spending on core brands and introducing new products; CEOs being the most optimistic they've been in five years and projecting increased sales, investment and hiring; CMOs who are seeing revenue gains and better profits, and are also planning to hire."

Primary among the bellwethers Hill cited was the Super Bowl - "one we all look forward to each year". The 2011 contest - which sold out faster than any of the other 44 National Football League finales - was the most-watched broadcast in history, with more than 111 million viewers, "finally outdoing the last episode of M*A*S*H".

Why? "Because there are more TV viewers than ever, with more options and more ways to talk about a live event as it happens via live blogs, Facebook, Twitter and other social-network tools. In fact, the Super Bowl was referenced 21 million times in status updates that day. And, staggeringly, there were 4,064 Tweets in one second during the final drive [of the game]."

The 4A's head also offered some specific reports of good news from the marketing front. According to Hill, Procter & Gamble and Kraft are boosting their spending. "Coca-Cola believes the company can double its current $31 billion sales within the next 10 years. And the automotive and cosmetics industries are increasing their spending."
However, Hill also cautioned, "We also must trust to look around us, here and now. We've become gun-shy about the positive - an outlook that's more reflective of post-9/11 anxiety than today's reality.

"But let me say, once again: Our industry is back…. Our industry didn't die. Some might have once said that we were on life support. But we've revived. We've by-passed rehab and come back leaner, tougher, more creative and more productive than ever."

In an appeal that echoed the leadership message of the recent Interactive Advertising Bureau annual conference, Hill noted, "Up until just recently, we had became factious, in the way that has been more reflective of today's political arena, or perhaps an episode of Real Housewives or, worse yet, Jersey Shore. However, these difficult times made us work better together, instead of further dividing us."