In another sign of the growing maturity of the podcast market, Omnicom Media Group has struck a deal with Spotify that will see it spending $20m on advertising in podcasts during the second half of this year.

Committing to spending such sums up front marks a potentially significant change in a market where advertiser efforts have hitherto tended to focus on buying on a per-show or per-episode basis.

Clients of the agency’s ad-buying units – Hearts & Science, OMD and PHD — will have “first-mover access” to exclusive Spotify podcast content, according to Axios.

They’ll also be able to avail themselves of research and best practice around targeting, measurement and reporting – and the advances being made in these areas are a factor in growing investment.

“We know that audio works very well at increasing consumer attitudes and driving action, but we believe that adding addressability to the podcast format may increase metrics even further,” Sullivan said.

Podcast adspend is growing rapidly and, pre-COVID, was forecast to double to $1.6bn worldwide between 2019 and 2022. Those figures will likely increase as a result of changes to listening habits during lockdown. 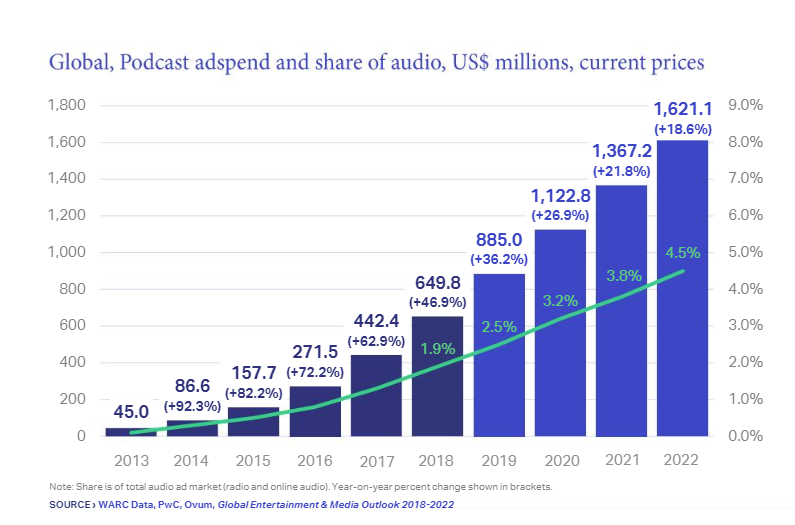 With fewer people commuting, listening times have altered, for example. People are more likely to listen during normal working hours, according to Ruth Fitzsimmons, managing director of Podfront UK.

“We’ve also seen a big shift in the late evening as well,” she said during a recent webinar: people are cooking or have put children to bed and “they’re starting to think about their own downtime”.

Subject matter too has changed, she added; with no live sport to talk about those listeners have moved over to other areas like news and comedy.