UK adspend rose 5.6% year-on-year to reach £5.97bn in Q3 2019, according to the latest figures from Advertising Association and WARC published today, with full year spending projected to increase 5.2% to hit £24.8bn.

The Advertising Association/WARC Expenditure Report shows the July to September period was 0.8 percentage points ahead of forecast and marked the 25th consecutive quarter of growth.

It’s a performance that Advertising Association CEO Stephen Woodford described as “particularly impressive given this was a period of Brexit and political uncertainty and very low overall economic growth.”

Overall market growth is being driven by increased spend on online advertising, which saw percentage increases across most formats:

Only online magazine spending and online radio spending failed to show any growth during the quarter. 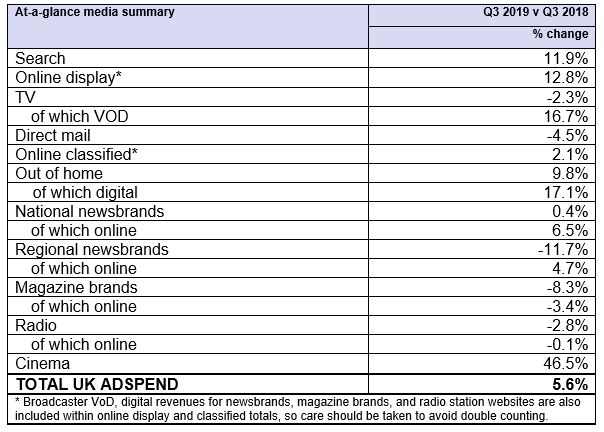 Woodford pointed to “exceptional growth in SME spend in digital, as well as larger advertisers continuing to move budgets into digital formats in most media sectors” adding that the projected growth for 2020 shows these trends continuing. 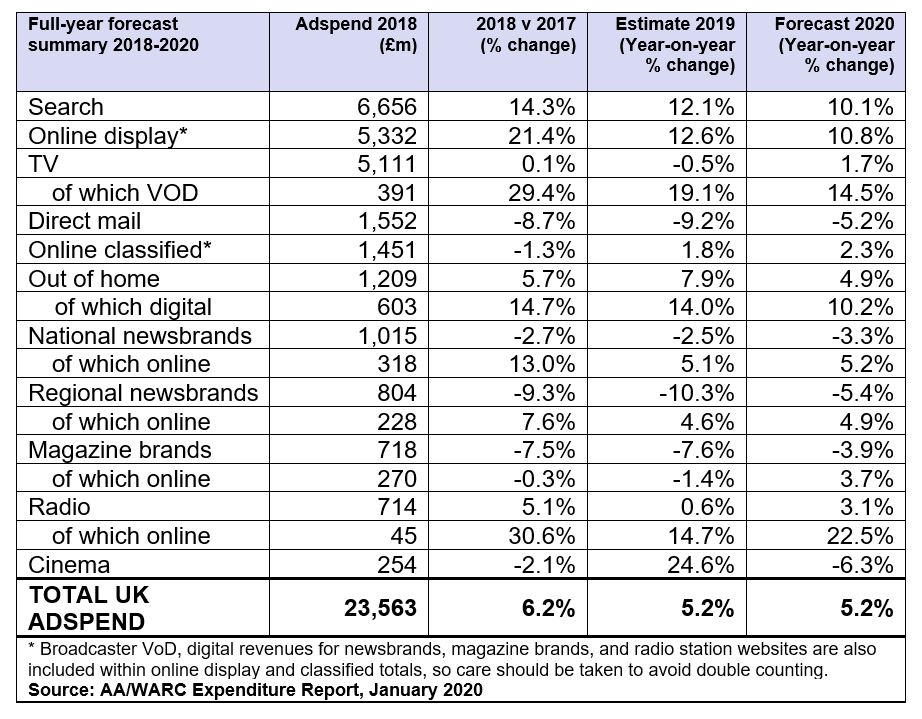 James McDonald, Data Editor at WARC injected a note of caution. “The UK’s ad market has sustained a 25-quarter period of expansion, but underlying data show that this growth is asymmetric,” he observed. “Excluding online advertising, the UK’s ad market has contracted each quarter for the last four years.”

In Q3 traditional media spending was flat or declining, although cinema spectacularly bucked that trend by growing 46.5%.

The tide is with digital however. “Online formats account for three in five pounds spent on advertising in the UK, and we expect this to rise to two in three by mid-2021, fuelling total market growth in tow,” said McDonald.

Total spending in 2020 is predicted to rise a further 5.2% to reach £26.1bn, with Woodford stressing the bigger picture. “With Brexit now a certainty, industry’s focus now turns to the future relationship with the EU and the importance of this to the overall health of the economy, which underpins this media spend growth,” he said.