New figures show that the Amazon-owned streaming service, Twitch, saw a massive increase in hours watched on its platform in Q2, cementing its place as the dominant video game streaming service.

This is according to a report from Streamlabs and Stream Hatchet exploring Q2 2020, based on data from the latter’s game-streaming analytics firm.

Put simply, the data reveals the strength of its position in the space. Twitch smashed the previous record it had set last quarter in terms of hours watched, growing from three billion total hours streamed in Q1 to five billion in Q2: an increase of 62.7%.

As shown in the below chart, this makes Twitch the undisputed leader of a market in which the $970m acquisition is paying off, even in competition with fellow tech giants. 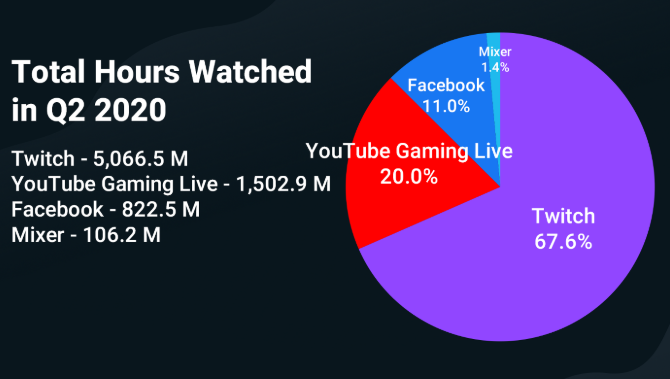 It also highlights the extent of Microsoft’s struggles in the same space. The company announced in late June that it would be closing its service, Mixer, and transferring its deals with high-profile gamers over to Facebook Gaming.

Returning to Twitch, however, its growth is truly staggering, as the below graphic shows: 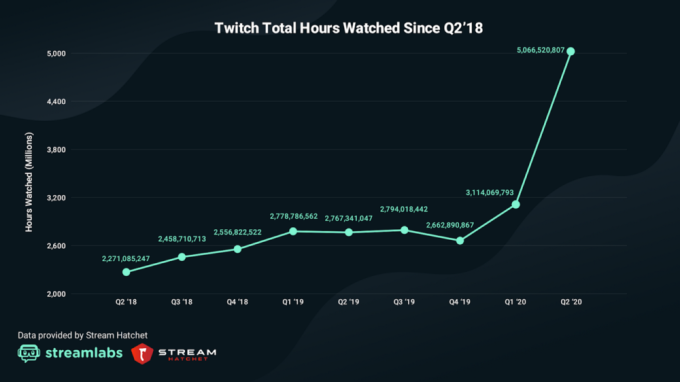 However, it has been a good quarter all round, with all platforms registering massive increases in viewing. Across the board, the top games watched have been Valorant, at 534m hours watched, followed by the multiplayer shooters PUBG and Fortnite with 237m and 174m hours watched, respectively.

Beyond gaming, however, recent reports also indicate the potential for other kinds of non-user-generated programming entering the streaming space. Last month saw reports that Twitch could start streaming Premier League football matches to which Amazon owns the rights, based on the idea that people want to interact while watching the game.

However, the news is not all rosy. Like the criticism levelled at Facebook’s continued inability to eradicate hate speech on its platform, the heavily user-generated Twitch is also beginning to come under fire for its failure to protect members of its community from abuse and harassment.

For the moment, the focus of both news organisations’ and clients’ attention has been Facebook, but in a climate where the tolerance for toxic environments is fast diminishing, Twitch will likely need to act fast if it is to change an ad revenue story that has already struggled to meet expectations.