In a record quarter for the iPhone maker, its flagship smartphone shone from strong demand, but it was wearables that showed the greatest growth at 37% year over year – consider the AirPod.

The iPhone, whose slowing growth had spurred an acceleration in the company’s services business, sold 9% more than this time last year, but wearables – the division involving the Watch, AirPods, and Beats gear – grew 37%, and now represents around 10% of the company’s total revenue.

It’s difficult to cast the collective mind back to September of 2016 and to the AirPods’ announcement alongside the then-flagship iPhone 7. Described by The Guardian as a “tampon without a string”, the product was released to online derision as people imagined instantly losing one or both pieces of the precious $159 item.

Fast forward to Christmas 2019, and CEO Tim Cook is telling Reuters that his company couldn’t meet the demand for both the AirPods or the Apple Watch. Unable to guarantee when AirPod demand could be fulfilled, Cook said they were working “very hard” on the issue.

Far from the oddity with which they were greeted, in major cities around the world, the AirPod is common. Not despite, but because a period of TikTok-based mockery about AirPods being for the super rich exploded across the internet, the device gained a visible association with luxury.

It’s not the first time that Apple has played with its distinctiveness to great effect.

As Richard Shotton points out in his book about behavioural economics in advertising, The Choice Factory, at the 2001 launch of the iPod, most other mp3 players shipped with unremarkable headphones, the devices hidden. Apple’s iPod, meanwhile, shipped with striking white headphones – powered by the wildly famous silhouettes campaign – “their distinctiveness made Apple look like the market leader long before it was.” 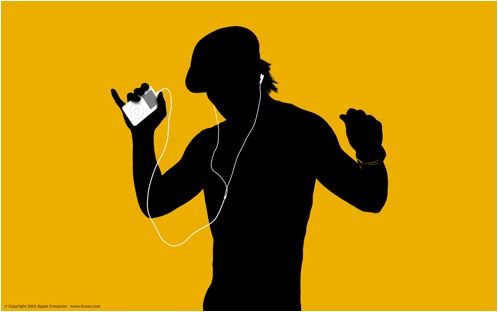 The perception of ubiquity, former Apple Chief Evangelist, Guy Kawasaki, would write, is crucial. “The bottom line is that familiarity breeds commitment, not contempt.”

The AirPod may have been mocked for being for-the-rich, and probably are, but by following a decades old Apple strategy, they are fuelling the company’s fastest growing segment.

But there’s more power to the AirPod, whose shape is a simple wireless version of the white wired earphones: they became a fluent device. Originally an idea coined by the consultancy System 1 as a feature of effective long-term creative campaigns, fluent devices lay a visual groundwork for quick, instinctive recognition of the brand.

Simply, the AirPod is an example of a distinctive asset leveraged over the long term, which should be basic, but forms the spine of the most innovative company on earth.