The US may be experiencing a “second mode” in consumer behaviour, as the initial instinct to panic-buy subsides and a degree of retail normality returns, but a new WARC report highlights the difficulties ahead as almost half of consumers expect to have less money to spend in the future.

“People have switched into a second mode of shopping,” Kevin Packler, director and vp of Amazon services at the Tombras Group, told Modern Retail. “They feel like they’ve stocked up initially” – now they’re looking to get back to something like their previous shopping patterns.

But while the current crisis continues, their spending is likely to be geared more towards in-home products and services than any other category, although Packler noted that “people are starting to return to more apparel and accessory categories”.

A new report from WARC Data, based on weekly consumer surveys carried out by Savanta, shows that over a quarter of US consumers are increasing their spend on in-home entertainment and groceries.

While consumables are seen as fairly recession-proof as long as there is no noticeable difference in price or quality, the report says, other categories will be suffering more.

Electronics, home products & furniture and apparel are among the hard-hit verticals. Two-fifths of consumers are cutting their spending on these categories. Beauty and cosmetics are also seeing one-third of consumers reducing their spend by at least half. 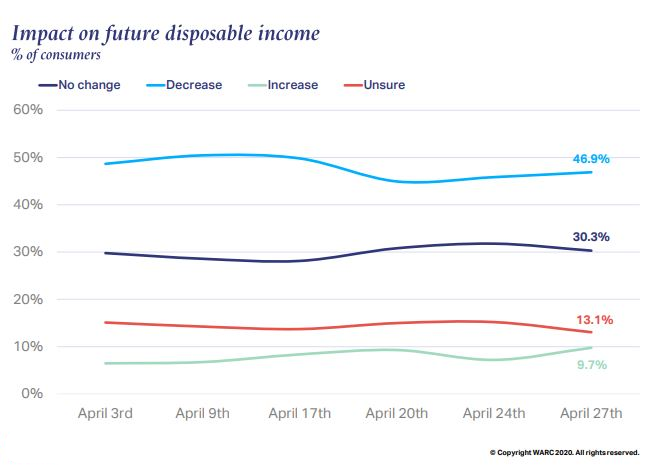 Over two-fifths (43.3%) have cancelled or delayed large purchases but some have brought them forward. A quarter (25.8%) say COVID-19 has prompted them to make ‘big ticket’ purchases. This share increases among younger and higher income audiences.

Men are more likely to be prompted to make large purchases than women but are also more likely to cancel purchases. Additional research suggests luxury items are most at risk as consumers plan to reduce outlay even as recovery begins.

Click here to learn more about WARC Data's latest report COVID-19: Consumer spending and media habits in the US.