UK advertising expenditure during the first six months of 2019 was 5.2% higher than a year earlier, at £12.0bn, according to the latest Advertising Association/WARC Expenditure Report published today and which predicts full year spending of £24.7bn.

Overall market growth is being driven by increased spend on online advertising, which saw rises across most formats though the biggest of these came outside of the usual drivers of search and pure play display.

Digital ad formats for radio broadcasters witnessed a year-on-year rise of 15.9% while TV video on demand (VOD) saw an increase of 20.0%. Digital out of home – not included in online totals – experienced growth of 17.2%.

Elsewhere, advertising revenue for national newsbrands grew for the first time in almost nine years, as a 15.6% rise in digital ad income was just enough to offset losses from print business.

But it was cinema that recorded the strongest growth during the quarter, with ad investment up by almost a half (49.6%). The sector benefited from the entry of a number of new advertisers in comparison to the same period in 2018, boosting growth substantially. 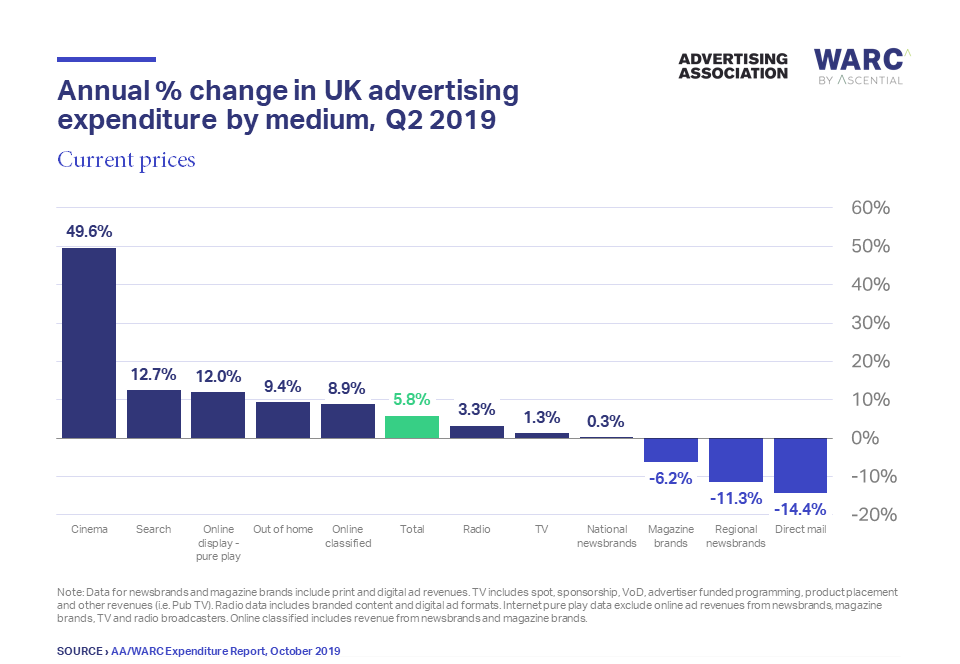 “An upgrade to our 2019 projection of almost half a point is reflective of stellar online growth, as well as over-performance for a number of traditional channels against the expectations we laid out in July,” said James McDonald, managing editor at WARC Data.

“There is little in the data we receive from media owners across the industry to suggest an impending downturn, but growth cannot be taken for granted while economic prosperity remains in the balance.”

Stephen Woodford, chief executive of the Advertising Association, observed that the Q2 figures, which cover the period immediately following the original Brexit date of March 29, demonstrated “the continued strength of UK advertising during a time of political uncertainty”.

But with another departure date about to be passed this week, he added that “we are acutely conscious of industry’s desire for clarity and the need to continue investing for the future during these uncertain times.”