China and India have over-indexed on concerns about the on-going coronavirus outbreak, while Japan has kept pace with global norms, according to a new study by McCann Worldgroup.

The high levels of concern over COVID-19 come as countries struggle to contain virus outbreak in tandem with the slow reopening of their economies. While 77% of respondents in China were worried, 90% of respondents were also confident about their country’s ability to deal with the virus compared the global percentage of 36%. In India, 53% of respondents were confident, down from a high of 64% in previous surveys, while Japan had the lowest confidence level at 19% but was up from a low of 11%. 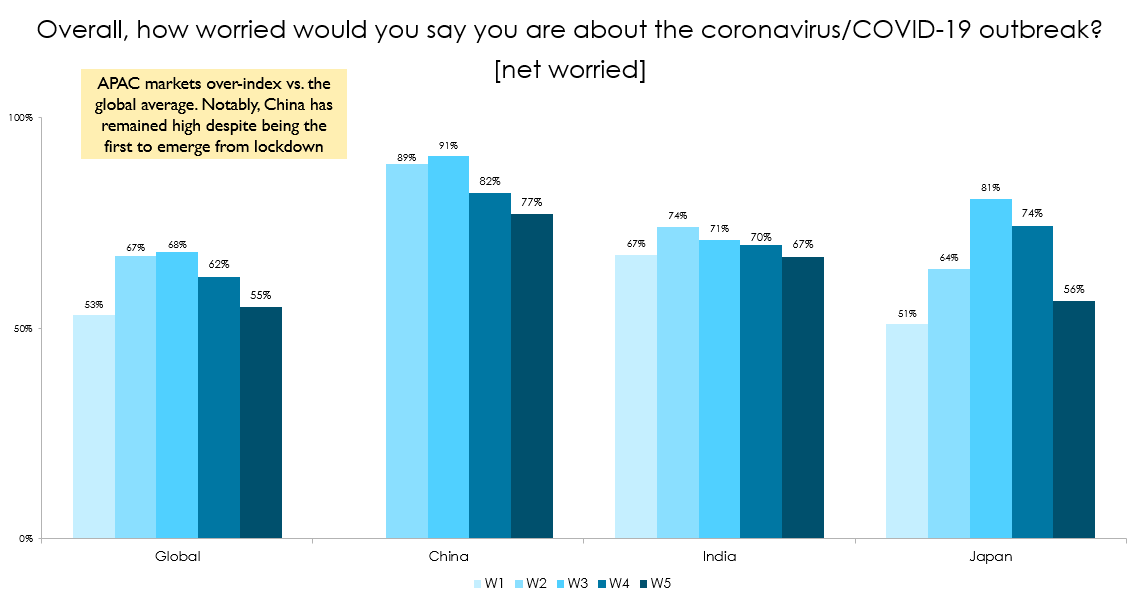 Recent data from McCann Worldgroup’s “Truth About Global Brands 2” research also suggests that brands have immense opportunity to fill these voids, with 81% of people globally stating their belief that brands have the power to make the world better.

“The world has been largely let down by their governments and over a third of people globally say that their freedom has been their greatest personal loss as a result of the pandemic,” said Richard McCabe, regional strategy director APAC, McCann Worldgroup.

“People are ready for what’s next, and now is not the time to fade into the background. As we’ve learned from McCann China’s study on ‘Building Brands in a Recession,’ which drew upon our Truth About Global Brands research, there’s a strong appetite for brands to push through the noise and help fill the vacuum of global leadership. 72% of people globally are open to brands playing a broader role in society, suggesting that this a crucial moment for brands to truly take stock of the situation and earn their meaningful role in people’s lives,” he added.

The recent study also asked respondents what personal losses have been experienced since the pandemic’s start and the loss of vacation opportunities is most acute in China (27%) compared to 14% globally, with Japan (22%) also ranking high and India low at 13%. In Japan, personal freedom was recorded as the greatest loss (33%) while the loss of education opportunities was most keenly felt in India (24%) compared to China and Japan with the global percentage at 13%.

The 'Covid Compass' to rule-following

Globally the study has identified a spectrum of responses to the rules and safety advice that the agency has dubbed “The Covid Compass” to help understand the variances in people’s response to reopening.

Roughly half of survey respondents have chosen to follow the rules and the other half are following them to varying degrees for different reasons ranging from feeling like institutions like the government have let them down or placing increased focus on restoring the economy to pre-pandemic levels.