The full impact of COVID-19 on broadcast advertising was laid bare in ITV’s Q2 results, announced yesterday, which revealed that ad revenues were down 43% year-on-year for the three months to the end of June.

There were significant declines across most categories; only publishing & broadcasting (+14%) and government & charities (+74%) saw any increase in spending. 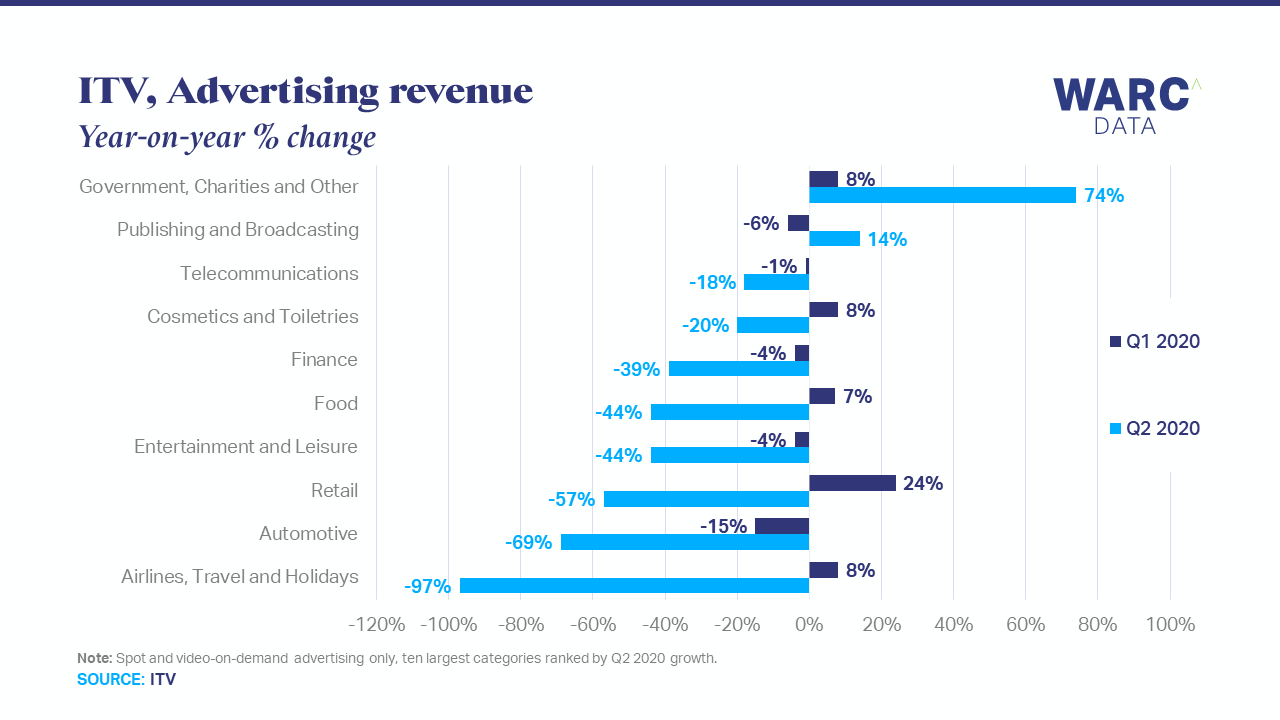 “The trend in July and August is improving, with July down 23% and August better than July,” said CFO Chris Kennedy, “We’re seeing spend increase in a number of the hardest-hit categories as they try to stimulate demand.”

Looking forward, CEO Carolyn McCall reported that “the whole tone of conversations with advertisers is positive about the autumn.

“They’re already planning Christmas campaigns, they’re already talking about how they do good over that period in terms of their campaigns, so their social purpose is being blended into their creative thinking on that.” It is, she added “a whole world away from conversations we were having in April in May, which were much more tactical.”

While viewing figures rose during the initial period of lockdown, they’re now falling again as people return to work, “but they’ve not gone back to where they were”, said McCall. “People have discovered content that they like, there have been habits formed over COVID.”

The focus for ITV, she said, will be on developing relevant content to retain the 16-34 year-olds it has attracted over the past three months. For example, some 2.1 million in this age group were watching ITV’s News at Six o'clock, she reported; “they liked it because it was informative, accurate and trusted. It was not fake news, it was not misinformation and that’s very valuable.”

Elsewhere, the broadcaster reported that production was returning to normal, with 70% of productions up and running.

McCall had little to say on the proposed advertising restrictions on HFSS foods, but took issue with references to junk food. HFSS is a broad category that includes olive oil, she pointed out. “We don’t yet know what products they [Public Health England] are including … There are so many unknowns just now.”

The latest Advertising Association/WARC Expenditure Report forecasts UK TV adspend to fall 15.1% in the third quarter of 2020, with growth not expected until Q2 2021.