Topics
New WARC forecasts – based on data from 96 countries – predict a 4.3% rise in global adspend, bringing total investment to over $616 billion. But while internet advertising is still the driving force, the online market is showing signs of weakness beyond the Google and Facebook duopoly.

This is according to WARC’s Global Advertising Trends report, out today. Compared to 2018’s 5.4% rise – the strongest since 2011 – the forecast for this year is slightly softer. Nevertheless, top line growth is healthy, with advertising's share of global GDP holding at 0.7% over the last decade.

But James McDonald, Data Editor, WARC, who authored the research, noted the dramatic changes in the global ad market’s undercurrents.

“The amount of ad money available to online publishers beyond Google and Facebook is now in decline, and the repercussions are potentially far-reaching, with several high-profile announcements of job cuts seen among online publishers already this year.

“Print publishers have already been severely hit by the migration of ad dollars online, and while traditional media excluding print have fared admirably to date, their collective take of ad investment is also trending downwards.”

Total internet advertising spend – including desktop, mobile, and tablet – will decline by 7.2% this year, if you take the Google and Facebook ‘duopoly’ out of the equation.

Even if Google's Traffic Acquisition Costs (TACs) – money paid to Google Network Members for hosting Google ads – are accounted for, internet spend beyond the duopoly is expected to dip by 0.7% in 2019. 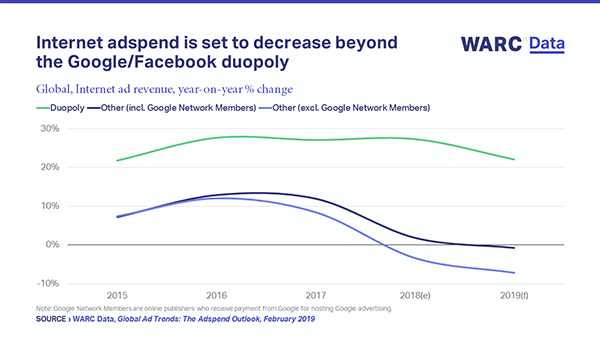 Looking at the total internet advertising market, spend is expected to rise 12.1% to $287.4bn worldwide this year. This would give internet a 46.7% share of media spend globally.

But in the US – the world’s largest ad market – internet is expected to account for over half (54.0%) of all media spend for the first time this year.

Within internet, mobile adspend is expected to rise 21.9% to reach US$165.7bn in 2019, placing it as the second-largest ad channel worldwide across 96 markets.

Most traditional channels expected to lose some market share

Out of home (OOH) continues to benefit from the integration of digital sites, especially in advanced markets. Digital out of home (DOOH) is expected to account for all of the 2.3% growth in OOH spend this year, as it already does in the UK. The medium's share is, however, expected to dip by 0.1pp in 2019.

Cinema is expected to be the only ad channel other than mobile not to lose share of global advertising spend this year; spend here is expected to rise 7.7% to $4.7bn.

Print is predicted to dip 6.9% in 2019, as legacy news publishers scramble to diversify their revenue sources to make up for a halving of ad revenue since 2009.