Topics
A CORUÑA: Zara owner Inditex has reported profit increases off the back of online efforts and canny investments in technology which have boosted its overall efficiency.

The retailer – the world’s largest by sales – reported gross margin growth in Q1 to 58.9% from 58.2% in the previous quarter, the Financial Times reported. And while overall sales grew just 2%, the company’s realignment to e-commerce was reflected in the fact that online sales increased 41%.

Commenting on the results, group CEO, Pablo Isla noted how the “strength of the integrated store and online model, bolstered by continued innovation, is driving growth and notable job creation”.

In March of this year, Inditex began rolling out new in-store technologies at key concept stores around the world. Some of these innovations include augmented reality and hologram displays.

An AR-equipped app rolled out in late April enables users to bring flagship store windows to life with models showcasing the latest collection; customers can click straight through and buy the product. 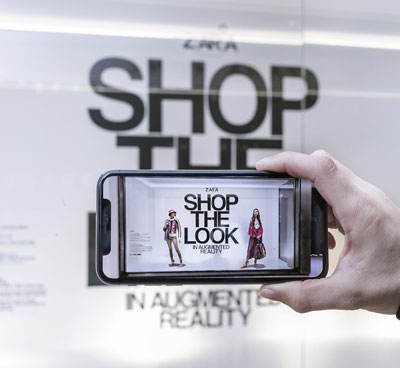 Crucially, the company appears to have woken up to the increasingly blurred line between online and in-store operations. Notably, one of the firm’s most important brands, Zara, launched online stores in Australia and New Zealand in Q1.

This is part of an investment drive that will include a new logistics hub in the Netherlands and a new distribution centre near the company’s Galician headquarters in Arteixo. Inditex says these investments will top €150 million.

Meanwhile, a C-suite shake-up aims to inject some tech expertise to the company’s senior decision-making mechanisms as former head of Microsoft Spain Pilar Lopez Alvarez joins the board.

Elsewhere in fast fashion, H&M saw the business end of disruption in March when it reported a 61% drop in operating profits for Q1. The Swedish company’s problem, which it aimed to quell with price reductions, was an increase of inventory while it struggled to adapt to digitalisation.

Inditex, however, has a structural advantage with its shorter supply chain, making it more agile in responding to shifting trends.