A majority of respondents to the WFA’s Programmatic, Data & Technology Global Survey 2020 said first-party data was now business critical for audience targeting, reflecting the importance of privacy to marketers.

Why it matters: measures to increase consumer control of data are tricky to implement, and do not always lead to the intended outcome, as a greater reliance on first-party data likely hands more power to walled gardens who can lawfully open the door to new consumers.

According to the survey, which is based on responses from 37 companies, representing approximately $76 billion in annual global marketing investment between Q4 2019 and Q1 2020, WFA members are now spending 41% of digital media investments on programmatic.

In an increasingly regulated and privacy-centric world, first-party data and consumer consent are fast becoming the new currency. First party data strategies are being developed rapidly and are increasingly business critical.

Interestingly, 58% of respondents in APAC say their first-party data is fully or significantly utilised. 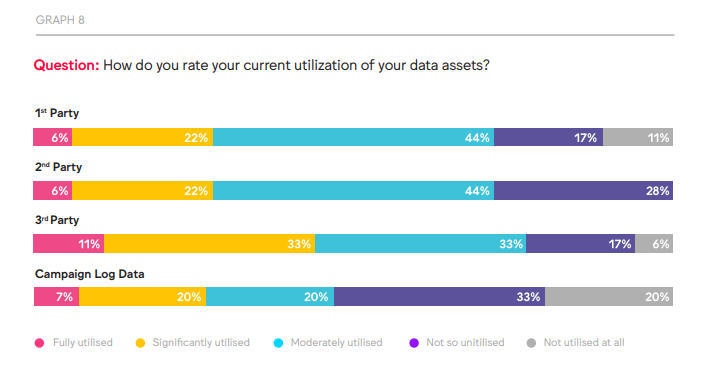 The report goes on to say that with Google’s Chrome browser no longer supporting third-party cookies from 2022 onwards, this trend will only accelerate. It also meets a point in time during which the European Union’s GDPR is in full swing, alongside the Californian state’s CCPA – both of which are tightening the rules around what data brands are allowed to use.

Though more first-party data is ostensibly good, there are some problems. First, as analysts from Marketscience Truesight wrote last year, first-party data has the potential to skew marketing efforts towards deepening relationships with a brand’s current audience versus prospecting new ones.

Ultimately, the consequence could be to hand even more power to the walled gardens – like Facebook and Google – who retain vast amounts of data and are now in an even stronger position to monetise it.

Still, there are some instances of brands showing a way through optimisation, namely with e-commerce channels, as Budweiser has recently shown. “We're now analyzing that data, making sure that we evolve our proposition, and are learning from new consumers who are coming into the category via e-commerce,” reported Steve Arkley, vp/global marketing for Budweiser during a recent video interview.