Topics
Total paid-for readership of the Financial Times has broken through the million-reader mark for the first time, according to owner Nikkei.

The milestone number has been passed a year ahead of growth targets, the company said. The FT introduced a paywall for its online content back in 2002, one of the first newspapers to do so. The move was a bold one at the time, introducing readers to the idea of payment for content they had come to regard as free.

The New York Times introduced its paywall in 2011 after years of deliberation. It now has more than three million digital-only subscribers.

The FT’s online subscriber base now accounts for over three-quarters of its circulation, although the company says the famous pink-paper edition is still profitable. The FT’s operating revenues were lifted to £383m in 2018, and operating profits to £25m, Reuters reported.

CEO John Ridding commented: “We have reached this record by developing a winning strategy, shared and supported by our owners Nikkei, who themselves now count more than 650,000 digital subscribers. By pioneering a subscription model and investing in digital transformation, we have proved that quality journalism can be a quality, growth business.”

The news comes following an announcement by the company last month of its further diversification into the live events business, with the purchase of a controlling stake in the consumer publisher The Next Web.

The deal means the FT will have ownership of the Dutch media company’s site, The Next Web, and the TNW Conference, a yearly event attracting some 17,500 people from around 3,500 companies, Digiday reported.

The acquisition will add to the FT’s own global events business, FT Live, which hosts 150 different events annually in categories ranging from the FT Innovation Summit in New York, to Managing Assets for UK Insurers.

Earlier this year, data from the Reuters Institute for the Study of Journalism confirmed that advertising was now no longer news publishers’ main source of revenue. 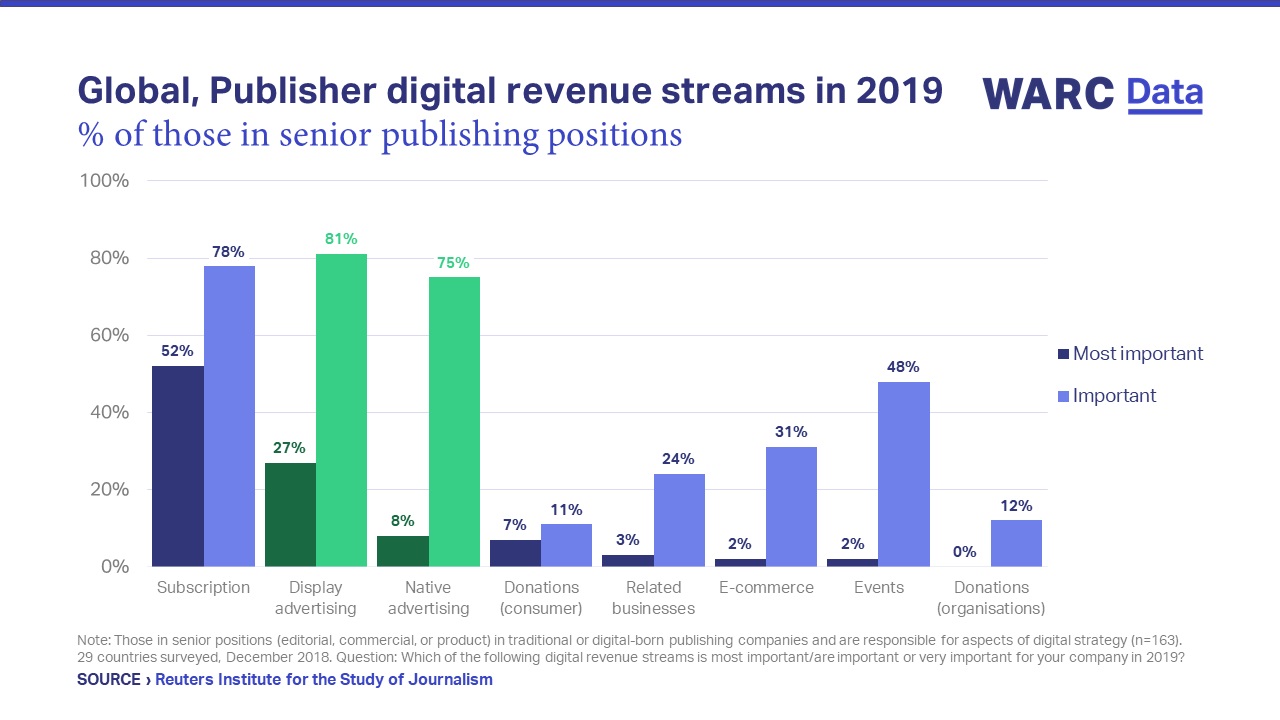 A survey of 163 senior publishing figures revealed that only 35% said ads would provide their primary online revenue stream in 2019. Display ads, cited by 27% of executives, were most popular, compared to native advertising’s 8%.

As the importance of advertising revenue declines, news publishers would focus on subscription income, with ads playing a supporting role.

Sourced from Reuters, Digiday, Reuters Institute for the Study of Journalism