Topics
The Asia Pacific region has overtaken Europe and the Middle East for in-app advertising impressions, according to a report from PubMatic.

The adtech company’s Q2 2019 Quarterly Mobile Index report revealed that the region now accounts for a quarter of global mobile app ad inventory, having more than doubled in volume over the last year.

Citing MAGNA Advertising Forecasts, the report observed that mobile programmatic media spending share in the region is expected to hit 34% by 2022. Private marketplaces (PMP) will be the dominant approach to buying programmatic advertising as soon as next year, surpassing open real-time buying (RTB).

PubMatic noted that, amid fraud concerns last year, mobile in-app advertising is fiercely driving much of this shift to PMPs from the open market. In a prior interview with WARC, PubMatic’s director of inventory quality Eric Bozinny said that “by wisely choosing which domains to work with and working with only whitelisted domains” it is possible to avoid many quality issues.

“Apps are tricky because you can’t see inside of them,” he explained. “This is something even the third-party fraud detectors can’t catch because they’re too busy looking heuristically at transactions.” (For more read WARC’s report: Why in-app ad fraud should keep marketers awake at night.)

Globally, mobile in-app PMP volume grew by 69% in Q2 2019 year-over-year, after almost tripling in the previous year. As a result, the in-app PMP impression share grew by 1%, while desktop and mobile web shares declined.

The ad monetisation rate for non-gaming iOS apps is typically lower than that for Android apps, but this has shifted rapidly in the past year. iOS’s share now exceeds 50% of worldwide mobile in-app impressions in Q2 2019, up from a one-third the year before. 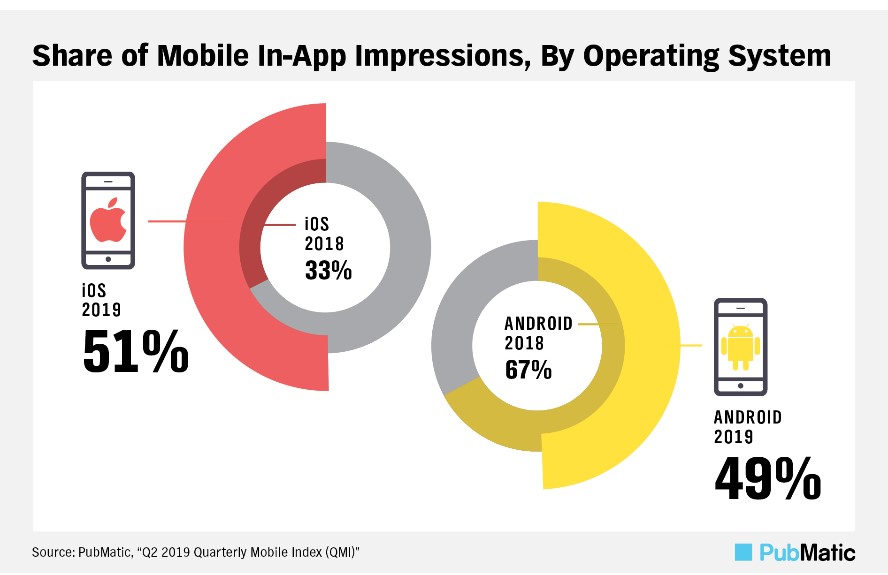 Video iOS ads are driving much of this growth, rising 127% over the last year. iOS share grew in all regions globally, even in APAC, where Android remains dominant; iOS is increasing, rising to 29% share from 16% year prior.

Research firm eMarketer forecasts that marketers will spend US$11.6bn on in-app video ads alone in 2019, accounting for 15% of all in-app ad spending.