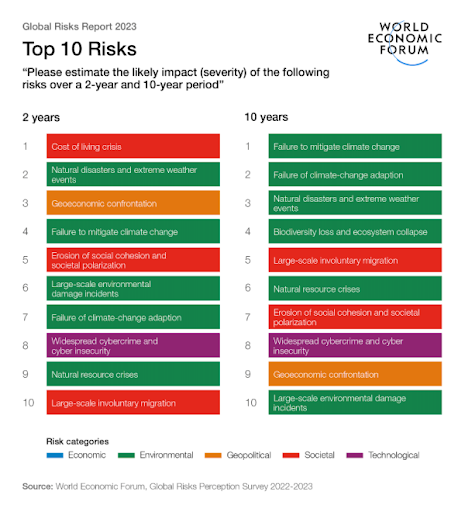 Understanding global risks – and why they matter to marketing

As world leaders, economists, and the great and good of business arrive in Davos for this week’s World Economic Forum, the organisation’s risk report highlights global issues that have implications for the marketing industry.

The WEF’s Global Risk report draws on the responses of over 1,200 experts across academia, business, government, the international community and civil society. So while this isn’t quite a crystal ball, it’s a good indication of what’s worrying experts and what to plan for over the short and long term, two and 10 years respectively.

Naturally, the issues it addresses are much broader than marketing, but between the state of the global economy – beset by rising prices – the threat of climate emergency, and the digitalisation of many aspects of people’s day-to-day lives, these risks overlap with the issues this industry faces.

The most pressing short-term risk is the economy, according to the report. Effectively, inflation is back and so are the interest-rate-rising monetary policies needed to deal with it.

While the causes of this are varied, ranging from illegal invasions and ongoing supply-chain trouble to the return of economic warfare, what it means in the short term is that debt has become more expensive and this is likely to diminish both economic growth and investment. This is as much an issue for businesses as it is for governments.

More broadly, this economic pressure may undo some of the gains made by middle-income people around the world – key sources of growth for multinational brands.

Among respondents, the climate was the clear medium-term risk, with environmental risks also taking up five of the top 10 short-term risks. Yet these are the “risks for which we are seen to be the least prepared”.

This is a really bad time to be hitting economic turbulence, as the resources needed to fund the transition are harder to find even in rich countries.

While there is little this industry can do about conflicts, some elements can get caught in the fragmentation of financial and technological systems, creating complexity and cost.

This, in turn, means goods are more expensive to produce, thereby embedding higher prices. A tactical necessity to choose a side in order to continue doing business could also see major corporations helping to accelerate this fragmentation.

Tech in all aspects of life

Technology has brought great benefits to many people and companies around the world, but there are multiple stories at play. With the far-reaching influence of digital platforms in our lives, states are now more willing to intervene.

The expansion of the digital economy has been fundamental to the changes in the advertising and media worlds over the last decade. Much of it has embedded the harvesting and use of large quantities of personal data in its processes. These datasets, meanwhile, create societal risks and threaten to “weaken individual digital sovereignty and the right to privacy,” even in democracies, the report finds.

The world now relies on digital technology for far more than just entertainment, and this has ultimately made it a target for rogue actors: “The ever-increasing intertwining of technologies with the critical functioning of societies is exposing populations to direct domestic threats, including those that seek to shatter societal functioning.”

Sourced from the World Economic Forum