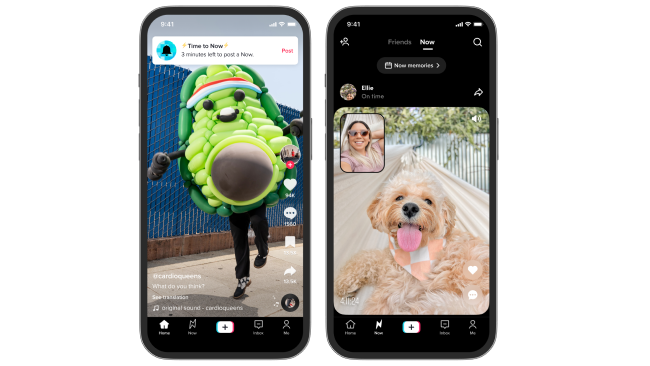 The app that launched (seemingly) thousands of short-form video copy-cat features appears to be reading the same growth playbook as it launches TikTok Now, a once-a-day both-camera social experience very similar to French app BeReal – the story speaks to the ByteDance-owned app’s growth and wider position.

Are you even a major social media platform if you haven’t blatantly copied a competitor? Are all social media apps all becoming each other?

Either way, ephemerality is back! BeReal, the small yet surprisingly enjoyable daily photo sharing app, is designed around capturing normal moments for your friends and gives its users relatively few features to do it other than a very distinctive notification. Having gone from just under three million daily active users in July to 10 million in August, it’s growing fast even if it enjoys just a fraction of TikTok’s users or revenue.

For TikTok, the opportunity here is to monetise this new form of social – adding additional features and growing time spent among its vast user base – all before BeReal or, more importantly, larger competitors like Instagram do so.

TikTok announced TikTok Now on its product blog, as a “daily photo and video experience to share your most authentic moments with the people who matter the most”. If that sounds familiar to the growing BeReal user base, that’s because it’s pretty much exactly the same, but with the addition of video.

Launching initially in the US as a tab within the TikTok app, it’s possible that other regions will get TikTok Now as a standalone app; currently, the new feature remains in testing.

There are several dimensions to consider here:

The news comes as TikTok faces increasing pressure in the US where lawmakers are pushing for a deal to safeguard American user data amid concerns that the company’s links to China pose a national security threat.

These worries won’t be helped by a major story in the New York Times in which sources allege that TikTok’s own executives have less influence over the app’s strategy than the Beijing-based owner ByteDance.

Still, none of this appears to have dampened TikTok’s perception among its user base or its growing cultural influence.