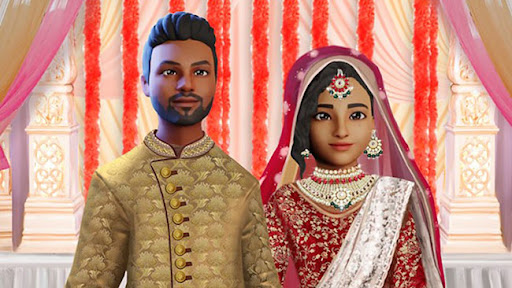 Would you get married in the metaverse? As the new internet struggles to be born, brands and the occasional real couple are exploring the latest incarnation of the virtual nuptial for its commercial and, sometimes, emotional appeal.

We’ve been here before: since the mid-noughties, Second Life has fuelled light features about this quirky, online route to an ancient idea. Now, with the advent of the metaverse, couples and brands are experimenting with new virtual worlds for real unions.

For brands, the opportunities are many and they’re profitable. Anything that you might need to deck out a virtual venue you could conceivably sell, you can sell in the metaverse.

Of course, it’s quite likely that this will remain a gimmick, but experimentation is relatively cheap, and any goods sold virtually have next to no marginal costs. It’s worth noting that the metaverse still lacks a ‘killer app’ use case that can take it into the mainstream by solving a significant problem; for now, it remains in a building and experimentation phase.

For brands, some of this really is quite new. Coca-Cola India has sponsored a “first-of-its-kind metaverse wedding in India”, according to a press release that mentioned little about the couple involved and a lot about the beverage company’s future-facing experiments.

Building on its explorations of the NFT (non-fungible token) space, Coca-Cola was the official beverage “sponsor” and responsible for the digital experiences of guests attending virtually.

As far as the release frames its involvement – platforms or specific technologies are omitted – guests were treated to Coke’s “infamous” jingle when they moved toward the beverage counter and were also offered discounts on beverages as return gifts.

In the real world

Coca-Cola’s vague foray into the metaverse is not the first virtual nuptial; the New York Times reported in December on a trend of weddings taking place in Virbela, an enterprise-level virtual-world building and hosting platform.

It’s not the only company playing in the space, firms selling digital planning tools are anticipating a bigger wave. And wedding planners are no doubt considering how their jobs may be changed by the onset of digital weddings in a digital world.

The Times situates the trend in the long pandemic, a state of hangover from two locked-down years in which intense family moments relied on technology to bring people together when physical proximity was unsafe. Zoom celebrations became commonplace; why would celebrations in an embodied internet not follow, supporters ask?

The role of emotion

The now quite long – if sporadic – history of virtual nuptials attests to the greater emotional connection people feel with avatars they control than with faces in a grid of boxes on a screen. In a metaverse wedding held online in February (pictured), a couple from Tamil Nadu were able to celebrate with family and also with the bride’s late father whose avatar was present too.

However, these remain quite rare cases. It’s also worth exploring manifestations of the metaverse that have emerged organically. In China, the now-removed app Jelly provided a glimpse into how natives of the social internet, Gen-Z, adopted a digital self-representation intended to transcend a single platform and represent the user across platforms.

Cross-platform and cross-state (physical to digital) experiences are likely to be key if this trend is to have any legs. The early February example of a real wedding in New Hampshire that played out in a virtual metaverse simulacrum, points to the way these experiences are often best used in layers.

It’s hard not to add a dose of reality when it comes to digital weddings. This has been around for a long time and not yet hit the mainstream. However, an opportunity lies in layers, giving brands an opportunity to facilitate not only cheap virtual experiences but maybe to add a little physical reality for those guests attending digitally.