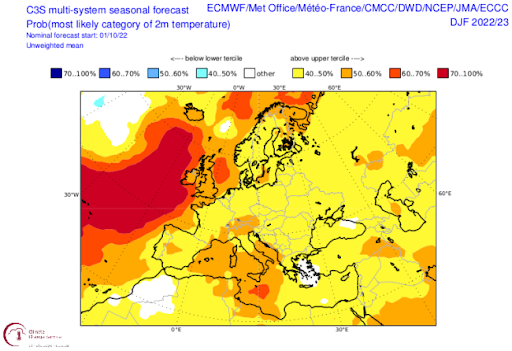 Climate change forecasters are predicting that temperatures on the US East Coast and most of Europe are more likely to be above rather than below freezing this winter – should it prove correct, that could have critical implications for business.

We’re in the middle of an energy crisis – yes – but the climate crisis is more pressing than ever. In the short term, however, milder winter temperatures would slightly ease the pressure on people’s heating costs across a continent that is feeling Russia’s weaponisation of energy costs.

These are the new seasonal forecasts from the Copernicus Climate Change Service, reported by Bloomberg.

While that’s pretty scary, Bloomberg notes that Copernicus’ forecasts aren’t indicative of all meteorologists’ outlooks, as some are predicting more volatile cold snaps.

While this would make a difference to consumer’s wallets, it also has big implications for industry: high energy costs threaten factory closures as well as major blackouts. And ultimately it doesn’t matter how digital a brand is if there’s no energy to power networks.

But there’s more to consider, with the long-term environmental outlook not looking good. Ski slopes across Europe and the United States are expected to see less snow, and already dwindling rivers could suffer further from less rain.

It should serve as a reminder that sustainability measures are not a nice-to-have, but an essential adaptation measure as the world continues to be rocked by climate change.